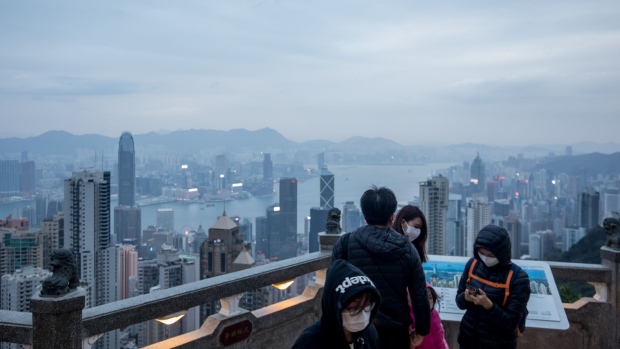 People wearing protective masks stand on a viewing terrace at Victoria Peak in Hong Kong, China, on Monday, Feb. 3, 2020. The outlook for the Hong Kong economy in 2020 is “subject to high uncertainties” including the global economic recovery, U.S.-China trade relations, the ongoing protests and the progression of the viral outbreak, the government said in a release. Photographer: Paul Yeung/Bloomberg , Enda Curran and Eric Lam

Financial Secretary Paul Chan announced tax cuts and a payment of HK$10,000 to each permanent resident of the city aged 18 or older.

Here’s a look at who will benefit -- and what stands to suffer.

“The bulk of the money spent is for the one-off cash disbursement per adult. This is obviously un-targeted and regressive and will not solve the problem of those most severely hit,” Garcia Herrero said.

To contact the reporters on this story: Enda Curran in hong kong at ecurran8@bloomberg.net;Eric Lam in Hong Kong at elam87@bloomberg.net

To contact the editors responsible for this story: Jeffrey Black at jblack25@bloomberg.net, Karen Leigh