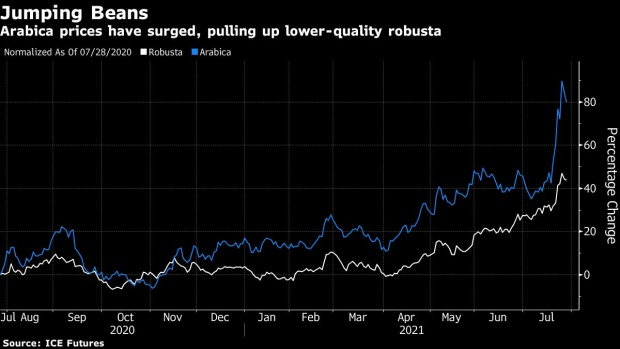 (Bloomberg) -- Global coffee consumers seeking more supplies to fill the void left by the devastating frost in Brazil won’t get much relief from Vietnam.

Shipments from the country, the biggest robusta coffee grower, are declining because of depleted farmer inventories, a worsening Covid-19 outbreak and a severe container shortage. Exports are likely to continue dropping through September, according to top shippers Intimex Group and Simexco Daklak.

“Farmers say they have run out of beans and so can’t benefit from this surge in prices,” said Do Ha Nam, chairman of No. 1 shipper Intimex Group. “We have bought no beans and sold no beans for more than a month.”

Prices of the milder tasting arabica variety traded in New York rocketed to the highest since 2014 this week after frigid weather destroyed trees in Brazil. That pulled up London prices of the more bitter robusta to the strongest since 2017. Arabica is set to increase 24% this month and robusta to rise about 13%.

“The price rally has not benefited exporters much,” said Phan Hung Anh, chief executive of Quang Minh Coffee Trading JSC in the southern province of Binh Duong. “Surging shipping costs have discouraged importers from purchasing beans in Vietnam. We have no new contracts to buy beans from farmers.”

Sending a container from Vietnam to Europe costs as much as $10,000, six to seven times more than a year ago, according to Anh, who sees his company’s overseas shipments this year shrinking at least 20% from 50,000 tons in 2020.

The country’s exporters haven’t been able to gain much from the jump in the market because stockpiles in their Ho Chi Minh City-area warehouses have been priced already, according to a survey of traders. “We have sufficient beans to fulfill our commitments through the end of the season,” said Le Tien Hung, chairman of the second-biggest shipper Simexco Daklak.

Shippers are worried that the logistics pain may persist through the end of this year when the new harvest rolls in and exports normally rise. An explosive new surge in coronavirus cases is another concern.

The tally in five provinces of the Central Highlands, a key coffee-growing region, jumped to almost 300 as of Wednesday morning from only a few before last week, according to the health ministry. The capital city of Buon Ma Thuot and a district have been under a stay-home order since Saturday.

Stay-home orders may be extended to other coffee areas in Dak Lak, which grows about a third of the country’s coffee, said Trinh Duc Minh, chairman of Buon Ma Thuot Coffee Association. Minh is worried infections may increase as thousands of workers from southern Vietnam, the virus epicenter, flock home to the Central Highlands to shelter from the delta variant.

Harvesting may slow if the virus stays until the harvest peaks in November, said Simexco’s Hung, who sees a smaller crop because of lower rainfall and a lack of investment. While most traders said it was too early to make a prediction, five of the 11 surveyed said they expected a good crop, with two seeing an increase of 6% to 10% from the previous harvest of 1.7 million tons.