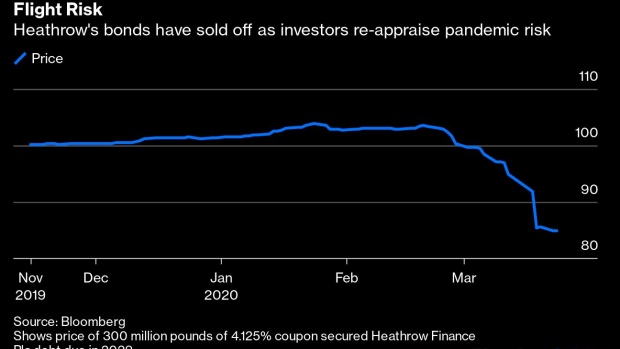 (Bloomberg Opinion) -- Atlanta’s Hartsfield-Jackson International, the world’s busiest airport, has turned a runway into a parking lot for grounded aircraft; about 80% of Frankfurt airport workers have had their working hours cut and many now won’t go to work at all; Manchester has closed two of its three terminals and short-hop specialist London City Airport is suspending all flights until the end of April. Orly airport near Paris is also closing temporarily.

The sudden collapse of air travel triggered by travel restrictions and customer fears of coronavirus is having a severe impact on airport cash flows. The fees they get from airlines have been cut to the bone, as have commercial revenues from services like car-parking. If retail concessions or car rental agents go bust, another source of income could be wiped out. European airport operators estimate that they face a 14 billion euro ($15 billion) hit to revenues.

Like their airline customers, the world’s airports are calling on governments for financial assistance. Some help is justified — not least because airports play a vital role in transporting essential medical supplies. But for privatized airports, like those in the U.K., it could be more difficult to convince authorities that help is merited. International investors who’ve funded a massive expansion of global airport capacity in recent years may have to make sacrifices too.

Where airports remain in public hands, as in the U.S., bailouts aren’t so controversial: airports are due to get a $10 billion handout as part of the government’s $2 trillion rescue plan. Without it, they worry they won’t be able to service a combined $100 billion debt load. A default would push up borrowing costs across the sector.

The main Paris and Frankfurt airports, though part of listed groups, also have public anchor shareholders, which guarantees them a sympathetic ear should the need arise. French president Emmanuel Macron has wanted to sell down the state’s 50% shareholding in Aeroports de Paris but hasn’t made much progress.

But in the U.K., taxpayer help for airports is more sensitive because much of the infrastructure is owned by international investors who’ve piled on debt and reaped large profits.

It’s no wonder the new U.K. finance minister Rishi Sunak is playing hardball. Writing to airlines and airports this week, Sunak told them to first try to raise money from shareholders or to seek flexibility from lenders before asking the public for help. Because of favorable regulation and the asset-heavy nature of the business, airports have been thought capable of supporting higher than average debt loads. Heathrow has 12.4 billion pounds of net debt, or 6.5 times ebitda (an imperfect measure of cash earnings).

But it’s still a risky business. The danger that a global pandemic could sap future demand for air travel is clearly spelled out in airport loan documents. The financial health of airports is also intertwined with the airlines that use them most. British Airways contributes more than 40% of Heathrow’s airline-related income, while Lufthansa provides Frankfurt airport with about 60% of its passengers. Both are now grounding the bulk of their fleets.

For now, U.K. airports have stopped short of asking for government cash or loans. Some  are better placed to cope than others. Heathrow says it has 3.3 billion pounds in liquidity, sufficient for at least a year of cash needs. In contrast, Gatwick held only about 15 million pounds of cash, plus a 300-million-pound undrawn loan facility, according to the most recent accounts. But its new majority owner Vinci has 14.5 billion pounds of cash and undrawn credit facilities.

Instead, U.K airports are calling for a reduction in regulatory and policing costs, relief from business taxes and that lenders be required to not enforce loan covenants temporarily. European peers are saying all aviation taxes should be suspended until the end of the year.

This is controversial stuff. Until a few weeks ago, politicians in Europe were leaning toward making air travel more expensive to discourage planet-heating carbon emissions. Still, there are decent arguments for why airports, even those in the U.K., should be cut some slack. In recent weeks their workers have braved crowded terminals to get passengers home, risking contracting the coronavirus themselves. And when the virus is defeated, we’ll need airports around the world to help kick-start an export recovery.

After warning that its financial performance would be “significantly impacted,” Heathrow has announced a variety of steps to cut costs, including cancelling executive pay and delaying investments. But unlike Frankfurt airport operator Fraport AG, which is scrapping shareholder payouts, Heathrow has been oddly reticent about dividends. A clear statement that these payouts will now end might make Sunak more sympathetic to the industry’s plight.