VIDEO SIGN OUT
MSCI Inc. scrapped plans to add a high-flying Hong Kong stock to its indexes because of concerns about investability, a rare reversal that sent the stock plunging 98 per cent.

ArtGo Holdings Ltd., which had soared almost 3,800 per cent this year for the world’s biggest gain among companies with a market capitalization of at least US$1 billion, erased nearly all of that advance within minutes on Thursday as investors reacted to MSCI’s decision. The stock wiped out more than US$5.7 billion of value before trading was suspended.

MSCI, which had announced its intention to include ArtGo just two weeks ago, said in statement on Wednesday that it would no longer do so after “further analysis and feedback from market participants on investability.” An ArtGo representative said the company, a marble producer that has been expanding into other businesses like real estate, couldn’t immediately comment. 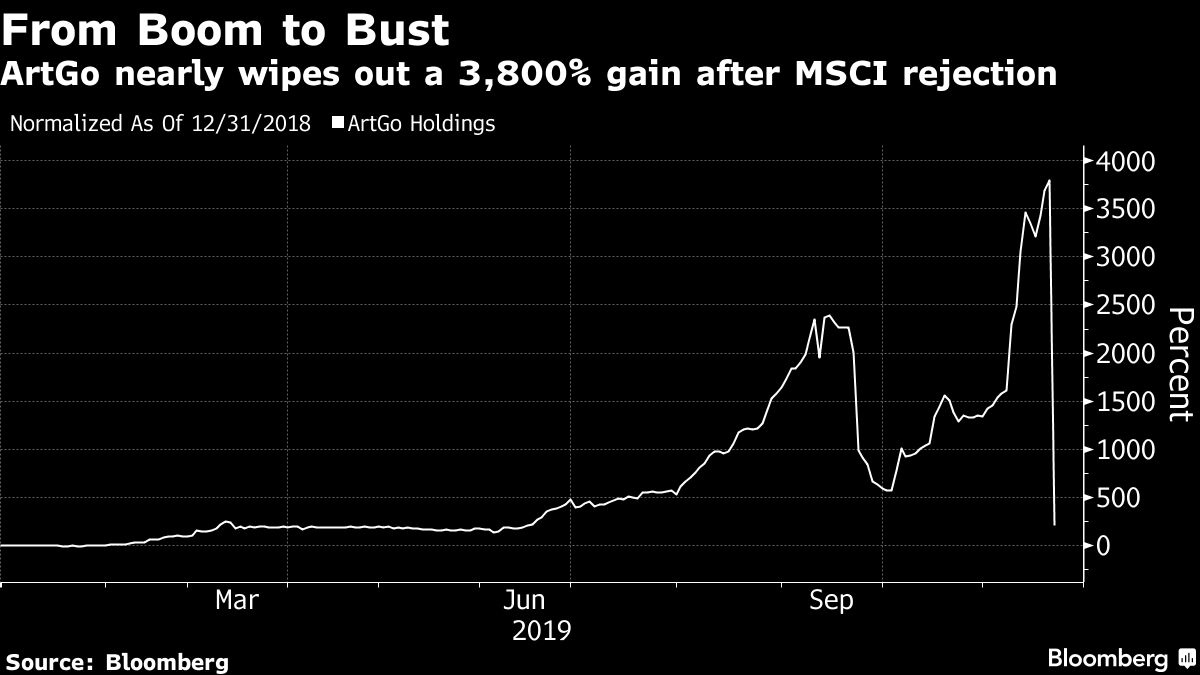 ArtGo’s rally had flummoxed local market veterans, with prominent activist investor David Webb warning in September that the stock was a “bubble.” Its surge was the latest in series of extreme, unexplained swings in Hong Kong that have cast the city’s financial markets in an unflattering light and led some observers to argue that MSCI and its peers should prevent such stocks from entering indexes that guide investments worth trillions of dollars.

“It’s good that MSCI is listening to what market participants are saying,” Daniel So, a strategist at CMB International Securities Ltd., said by phone. “It’s positive for the health of the market. It’s hard to avoid adding some stocks with bubbles into the benchmark if we just focus on data like market cap. So it’s good that MSCI is doing case-by-case studies.”

MSCI was criticized earlier this year for including Hong Kong-listed China Ding Yi Feng Holdings Ltd. in its indexes after the company rallied 8,500 per cent over five years despite repeatedly reporting operating losses. The stock was later suspended by Hong Kong’s securities regulator, which said it was investigating suspicious trading in DYF after its price had climbed to an “irrationally high” level.

At the time, MSCI said it used quantitative criteria such as market value, free float, and liquidity when choosing companies for its indexes and didn’t make judgments about profitability, growth prospects or “any other subjective” metrics.

Index decisions by MSCI and its rivals have grown increasingly important for stock markets in recent years, thanks to the growing popularity of passive investment strategies. Multibillion-dollar funds run by BlackRock Inc., Vanguard Group Inc. and Northern Trust Corp. were all buyers of DYF’s stock after it won entry into MSCI’s indexes.

MSCI didn’t immediately respond to a request for comment on ArtGo. FTSE Russell, which includes the stock in one of its China indexes, declined to comment, as did spokesmen for the Hong Kong stock exchange and the city’s Securities and Futures Commission. Bloomberg LP, the parent company of Bloomberg News, competes with MSCI and others by compiling indexes and providing analytics for stocks, bonds and commodities.

ArtGo, which listed in Hong Kong in 2013, reported a net loss of about 29 million yuan (US$4.1 million) in the first six months of 2019, after losing 396 million yuan in 2018. The company began investing in the Chinese real estate market this year, buying properties valued at 206 million yuan. ArtGo funded the deals through a combination of cash and newly issued shares that were sold at discounts of more than 20 per cent to the prevailing market price at the time.

The stock began surging around the middle of this year and was added to the FTSE Global Equity Index Series China Index in late September, prompting passive funds managed by the likes of Vanguard and State Street Corp. to buy. On the first trading day after ArtGo was included in the index, it plunged nearly 50 per cent. State Street and Vanguard declined to comment.

By early October, ArtGo had begun rallying again. The gain accelerated after MSCI said on Nov. 7 that it would add the company to its indexes, sending the stock up more than 100 per cent between the announcement and Wednesday’s close. Its plunge on Thursday was the biggest in Hong Kong, where the benchmark Hang Seng Index slid 1.6 per cent.