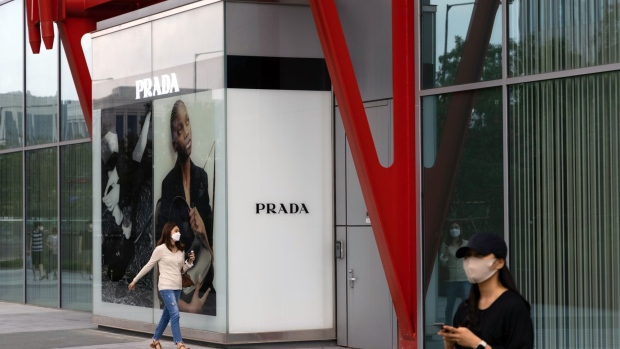 (Bloomberg) -- When Kelly Yoon, a 38-year-old mother from the middle-class enclave of Songdo on the outskirts of Seoul, attended a school event for her nine-year-old daughter, she was stunned by the designer goods dripping from the other moms.

“I saw all kinds of Chanel bags on my way to the classroom,” she said. “Mothers love Bulgari’s Diva’s Dream and Van Cleef & Arpels’ jewelry collections, and a Moncler winter jacket is actually a ‘uniform’ for moms here. The most popular car is a Mercedes-Benz SUV.”

It’s a scene playing out across the country, where a potent mix of status seekers, cashed up homeowners and YOLO-ing (you only live once) millennials has combined to make South Koreans the world’s biggest per-capita spenders on luxury brands.

Koreans’ spending on personal luxury goods from designer handbags to $2,000 puffer jackets, rose 24% to 21.8 trillion won ($16.8 billion) in 2022 — equal to about $325 for every man, woman and child, according to a Morgan Stanley report published earlier this month.

Helping fuel the surge was Korea’s runaway housing boom, which saw property prices in some cities double during the pandemic, making homeowners feel wealthier. On the flipside, younger Koreans despairing they’d never get on the property ladder decided instead to spend their income on luxury treats.

The trend mirrors a global upswing in luxury spending, driven in part by growing affluence worldwide, that has held propel Bernard Arnault, the French tycoon behind luxury-goods powerhouse LVMH, to become the world’s richest person.

“Everyone seemed so optimistic about their future during the pandemic,” said Lee Wonjae, a sociology professor at Kaist Graduate School of Culture Technology in Daejeon. “Consumer confidence was so strong because stocks, cryptocurrency and housing prices were rising. Even though some people missed the opportunities, their friends were making money, so they believed everything was going to be like this forever.”

Millennials have also contributed to the luxury boom, said Ahn Dong-hyun, an economics professor at Seoul National University. “They might have given up on buying a house and try to make themselves happy by buying expensive stuff instead.”

According to a 2022 report from retail giant Lotte Group’s member loyalty unit, purchases of luxury goods by people in their 20s jumped 70% in 2021 compared to 2018, the strongest growth among all age groups.

“All my friends have at least one luxury handbag,” she said. “Korea’s Gen-Z has a motto: YOLO. We can’t buy a house, it’s too expensive, so why should we save money for the future?”

Instagram posts bragging about luxury shopping also affected her, Lee said. South Korea ranked No. 3 in the world by active social media users at 91.2% of the population, according to a 2022 report from Hootsuite. The rise of Korean pop culture, led by boyband BTS and Oscar-winning movie Parasite, has prompted top fashion houses and luxury brands to sign Korean stars as ambassadors.

Celebrities such as Squid Game actress Hoyeon Jung endorses brands including Louis Vuitton and Bentley on Instagram, while the members of girl band Blackpink endorse luxury companies including Chanel, Bulgari, Cartier and Tiffany.

Dior this month announced it has signed BTS member Jimin as a global ambassador, who was mobbed by fans screaming and chanting his name at a Paris fashion show last week.

The importance of appearance can resonate with Korean consumers more, with spending on cosmetic surgery appearing to start at a younger age and be far higher than in most other countries, the Morgan Stanley analysts said.

With a population of just 51 million, Korea is now as important as Japan (population 125 million) for luxury goods makers, with Korean nationals accounting for 10% or more of total retail sales by top-end brands such as Prada SpA, Moncler SpA, Bottega Veneta Inc. and Burberry Group Plc, the report said.

“As for status, a number of studies have shown that financial success tends to be highly valued in Korea, so personal luxury goods can be an important tool to create social stratification,” Morgan Stanley said. In China, luxury spending works out to around $55 per person, the report said.

However, some headwinds are coming. Korea’s household debt is higher than Japan, the UK and US, and the Bank of Korea has increased its key policy rate to 3.5% from a low of 0.5% in July 2021, bringing the era of cheap monet to an end. Real estate prices in Korea fell by the most in the world in the third quarter of last year.

“This kind of a boom won’t last forever, and we might be seeing something similar with what happened in the 1990s in Japan,” after the so-called Bubble Economy burst, said Lee, the professor at Kaist Graduate School of Culture Technology.

--With assistance from Youkyung Lee and Kanoko Matsuyama.