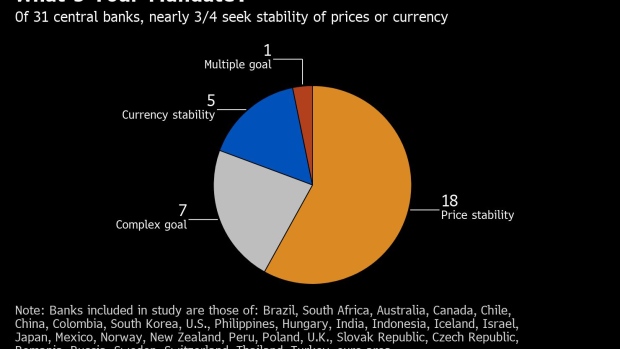 The Marriner S. Eccles Federal Reserve building stands in Washington, D.C., U.S., on Friday, Nov. 18, 2016. Federal Reserve Chair Janet Yellen told lawmakers on Thursday that she intends to stay in the job until her term expires in January 2018 while extolling the virtues of the Fed's independence from political interference. Photographer: Andrew Harrer/Bloomberg , Bloomberg

Struggling to hit their targets for inflation, central banks around the world are debating whether they need to alter what they’re aiming for.

From the Federal Reserve to the European Central Bank, officials are studying their current strategies and whether they need to be changed to revive inflation as it keeps undershooting the levels deemed to represent price stability.

Here’s a rundown of what some central banks are talking about:

Fed officials have dedicated 2019 to reviewing how best to achieve their mandate of maximum employment and stable prices. The research has been complimented by several “Fed Listens” events around the country where representatives from business and labor give the central bank feedback about how the economy is performing. Both labor and business leaders have told Fed officials that low inflation doesn’t appear to be a large problem.

The bigger issue is opportunities for workers. In June, Chairman Jay Powell discussed the benefits and challenges of so-called make-up strategies in which inflation is temporarily pushed above the 2% target to compensate for past undershoots. The Fed has mostly missed its inflation goal since it was introduced in 2012, but officials have said explicitly that they aren’t going to change goal. U.S. central bankers said they will report the results of the review in the first half of 2020.

ECB staff have begun studying a potential revamp of their inflation goal, according to officials familiar with the matter. They are informally analyzing the institution’s policy approach, including the question of whether the current target of consumer-price growth “below, but close to, 2%” is still appropriate for the post-crisis era. President Mario Draghi favors a “symmetrical” approach, meaning flexibility to be either above or below a specific 2% goal, the officials said. That would allow the ECB to keep inflation elevated for a while after a period of weakness to ensure price growth is entrenched. Changing the goal itself would probably require a formal review which is something Christine Lagarde may want to undertake when she takes over the helm of the ECB in November.

It would be up to the U.K. government to change the Bank of England’s mandate. But economist Tony Yates says Britain is the most likely Group of Seven country to see its goal revised, especially if the opposition Labour Party comes to power. Policy makers haven’t discussed whether tweaking the mandate would be a good thing, but Gertjan Vlieghe said recently that the BOE should publish a forecast of the most likely path of interest rates that would be needed to keep inflation on target.

Hungary has been tinkering with its traditional 3% inflation goal in recent years, partly to allow more leeway for policy makers. In 2015, the central bank said it would observe a tolerance band of 1 percentage point on either side of its 3% inflation target. The monetary authority at the time said it’d allow it avoid rate changes if consumer price trends were deemed temporary. In December 2018, the central bank said it’d shift its focus from the nominal inflation number to core inflation stripped of the impact of indirect taxes, which it said was the best at capturing “persistent trends” in price data.

New Zealand’s central bank formally adopted a dual mandate of maximizing employment and achieving price stability in April. Since then the Reserve Bank has cut interest rates to a record-low 1.5% amid signs both targets are under pressure as economic growth slows. Governor Adrian Orr has signaled that further rate reductions may be needed as inflation sits below his 2% target, and hiring intentions decline. Economists are almost unanimous that the RBNZ will cut the official cash rate to 1.25% in August while a minority tip a further cut to 1% before the end of the year.

Former central bank chief Arminio Fraga, who introduced inflation targeting two decades ago, says it’s now time to change the system. He suggests that the monetary authority should “smooth” economic cycles as part of a secondary mandate it would receive along with its independence, currently being discussed in Congress. That would be in addition to its main goal of price stability, and not to be mistaken with a growth target, he stresses.

The Thai central bank said in a recent quarterly Monetary Policy Report that it held talks about reducing the 1% to 4% target range, but decided against doing so this year, given concerns about economic growth and the need to build policy space.

Bank of Ghana Governor Ernest Addison surprised the market in January by cutting the key interest rate, and then also saying it may be time to consider a lower inflation target to make the economy more competitive. In 2007 the central bank was the second in sub-Saharan Africa to adopt an inflation-targeting regime and has pursued price growth in a band of 6% to 10% since 2013. Official talk of a lower target went quiet after inflation surged to a six-month high of 9.5% in April due to a drop in the cedi following the January rate cut.

South Africa’s central bank in early 2018 started making it clear that it prefers inflation anchored near the 4.5% midpoint of its target band and not just below the 6% upper end. While the Reserve Bank’s mandate allows for flexibility in cases of exogenous shocks the Monetary Policy Committee is less tolerant of inflation breaching the target than in the past, MPC member and Deputy Governor-designate Fundi Tshazibana said in February. This drive to keep inflation close to 4.5% could set the central bank up for more clashes with politicians and some ruling-party officials, who are pushing for an expanded mandate beyond just inflation.

The Bank of Canada renewed its mandate with the federal government in October 2016, ratifying the Group of Seven’s longest-running inflation target in the process. The Ottawa-based central bank strives to keep annual consumer price increases between a band of 1% and 3%. While that standard remained intact, three new indicators of core inflation were introduced at the time. The bank’s mandate is next up for renewal in 2021.

--With assistance from Zoltan Simon and Stephen Wicary.

To contact the reporters on this story: Rene Vollgraaff in Johannesburg at rvollgraaff@bloomberg.net;Craig Torres in Washington at ctorres3@bloomberg.net;Tracy Withers in Wellington at twithers@bloomberg.net

To contact the editors responsible for this story: Simon Kennedy at skennedy4@bloomberg.net, Brian Swint