Biggest ever drop in household net worth

Around the world, soaring borrowing costs are squeezing homebuyers and property owners alike.

From Sydney to Stockholm to Seattle, buyers are pulling back as central banks raise interest rates at the fastest pace in decades, sending house prices falling. Meanwhile, millions of people who borrowed cheaply to purchase homes during the pandemic boom face higher payments as loans reset.

The rapid cooldown in real estate — a leading source of household wealth — threatens to worsen a global economic downturn. While the slump so far isn’t near the levels of the 2008 financial crisis, how the decline plays out is a key variable for central bankers who want to tamp down inflation without hurting consumer confidence and triggering a deep recession.

Already, frothy markets such as Australia and Canada are facing double-digit house-price declines, and economists believe the worldwide downswing is only getting started.

“We will observe a globally synchronized housing market downturn in 2023 and 2024,” said Hideaki Hirata of Hosei University, a former Bank of Japan economist who co-authored an International Monetary Fund paper on global house prices. He warns the full impact of this year’s aggressive rate hikes will take time to play out for households. 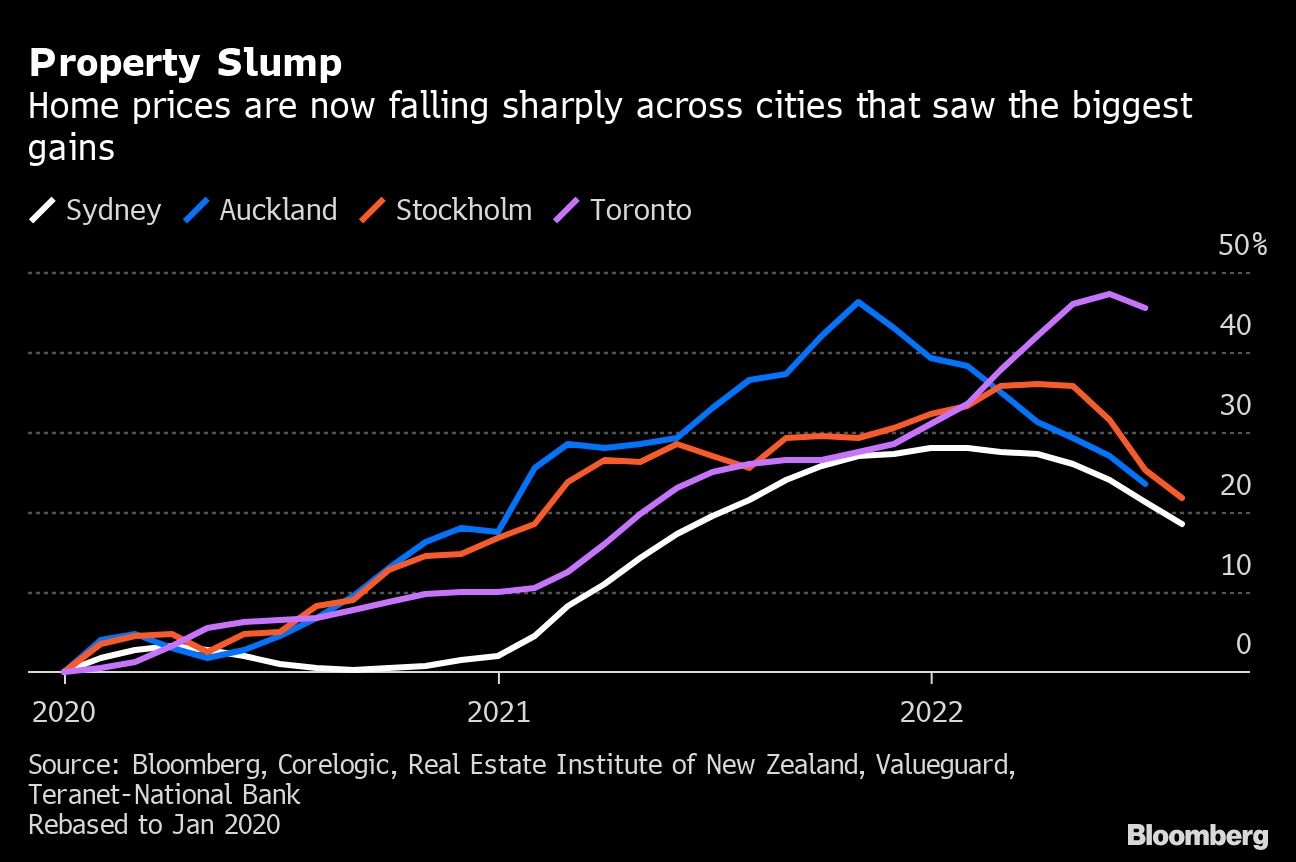 The slowdown is a stark turnaround from a boom fueled by central banks’ easy-money policies in the years after the financial crisis and then supercharged by a pandemic that sent people searching for bigger spaces and remote-work-friendly homes. Now, many people who paid record prices face loans due to reset higher just as soaring inflation and a potential recession hit.

“Young families that have taken on debt have never experienced in their lifetime a sharp rise in interest rates at a time when their real, inflation-adjusted wages are falling,” said Rob Subbaraman, head of global markets research at Nomura Holdings Inc. “This could come as quite a shock to them.”

How exposed borrowers are to rising rates varies notably by country. In the US, for instance, most buyers rely on fixed-rate home loans for as long as 30 years. Adjustable-rate mortgages represented, on average, about 7 per cent of conventional loans in the past five years. By contrast, other nations commonly have loans fixed for as little as a year, or variable-rate mortgages that move closely in line with official interest rates.

Australia, Spain, the UK and Canada had the highest concentration of variable-rate loans as a share of new originations in 2020, according to a May report from Fitch Ratings. 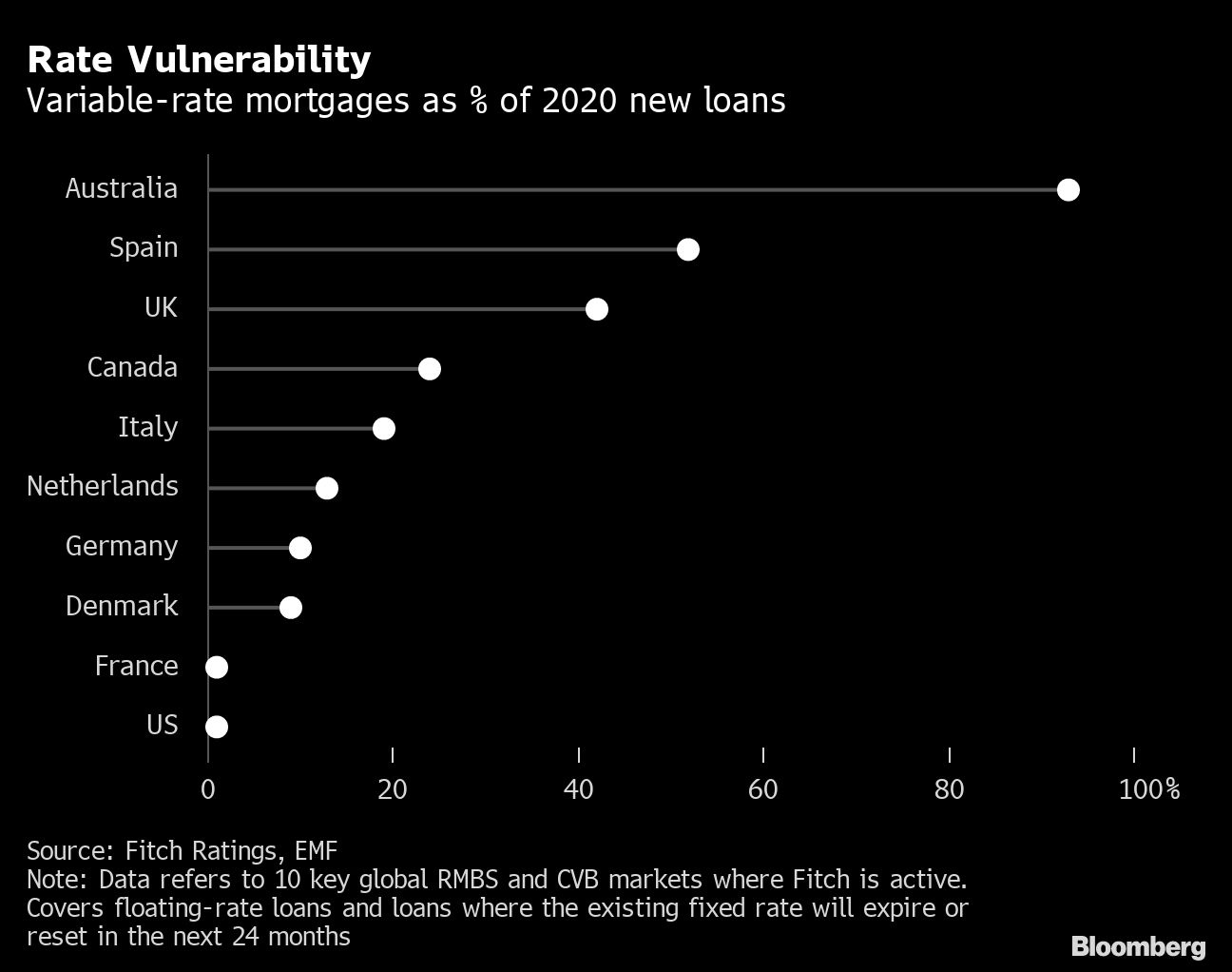 Other countries have a large proportion of mortgages resetting imminently: In New Zealand, for instance, about 55 per cent of the outstanding value of residential mortgages is either on a floating rate or on a fixed rate that needs to be renewed in the year to July 2023.

New Zealand, where prices rose close to 30 per cent in 2021 alone, is something of a poster child of the pandemic housing boom — and its unraveling. The central bank has hiked interest rates seven times in the past 10 months and house prices were down 11 per cent in July from the peak in November last year, according to the Real Estate Institute of New Zealand. Economists predict they may eventually drop as much as 20 per cent.

Femke Burger, a 33-year-old insurance case manager, bought a house in the Wellington region in March 2021 for NZUS$825,000 (US$504,000). In the months that followed, the value of her property raced to NZUS$1 million, according to house valuation websites. Those gains have evaporated. Her two-bedroom, semi-detached property is now valued at about the same amount she paid for it.

“I definitely feel as though there’s been a reduction in my own personal financial wellbeing,” said Burger, who must refinance her mortgage in the next 12 months. While she’s confident she can handle the increase in interest rates, it will still hurt.

New Zealand, like most developed world economies, is weathering the housing slowdown so far. Household balance sheets and savings are strong, labor markets are thriving and lending standards have tightened since the mid-2000s boom that sparked the financial crisis — meaning a cascade of defaults is unlikely.

Many property owners are still sitting on plenty of home equity from years of soaring prices, and in some overheated areas, lower values may allow buyers to enter the market.

“Given that the housing affordability crisis is very serious in many major economies, cooling house prices may result in some positive effects,” said Kwan Ok Lee, who specializes in housing at the National University of Singapore.

Economists, however, are still nervous. If the paper losses experienced by homebuyers such as Burger turn into more material declines for households, banks and developers, that could hit a slowing world economy the International Monetary Fund has warned is teetering on the edge of recession.

“If central banks tighten too far, the prospect of a soft landing diminishes,” said Niraj Shah of Bloomberg Economics. “House prices could fall faster, exacerbating and prolonging a recession.”

In some countries, governments have already intervened to help hard-pressed consumers facing rapidly escalating repayments. In South Korea — one of the first Asia-Pacific economies to start hiking rates — policymakers recently agreed to outlay more than 400 billion won (US$290 million) in funds to help reduce the share of households on variable-rate mortgages.

And in Poland, where monthly payments for some borrowers have doubled as rates rise, the government stepped in earlier this year to allow Poles to suspend payments for up to eight months. The move wiped out profits of major banks after the industry was forced to book about 13 billion zloty (US$2.78 billion) in provisions.

China is dealing with an escalating property crisis tied to a wave of developer defaults and borrowers withholding payments on mortgages for unbuilt homes. In other countries, the ripples are also starting to spread.

In Sweden, formerly one of Europe’s hottest markets, home prices have fallen about 8 per cent since the spring, with most economists now expecting a 15 per cent drop. Rising rates also are pressuring property companies that borrowed heavily on the bond markets to finance their operations, leaving investors increasingly concerned about their ability to refinance that debt.

Price declines also are accelerating in the UK. Home values are flat or dropping in almost half of London’s boroughs, a Bloomberg analysis shows. HSBC Holdings Plc has warned the UK is on the “cusp of a housing downturn” and demand probably will plunge 20 per cent over the following year.

About 1.8 million UK borrowers are due to refinance in the next year. Most vulnerable are the first-time buyers who bought homes as prices spiraled during a stamp duty tax holiday introduced in summer 2020 to bolster the market during the pandemic. Those who fixed for the short term face significantly higher repayments at a time when real wages are falling at a record pace and the cost of living is soaring.

While the US has less risk from resetting mortgages, the surge in borrowing costs in recent months has pushed price-squeezed buyers into more flexible loans that carry cheaper interest rates. The share of adjustable-rate mortgages in loan applications jumped in July to the highest level in 15 years, according to Zillow Group Inc. data.

Goldman Sachs Group Inc. predicts US national prices will flatten in 2023, though there are already signs of more rapid declines in certain regions. Sellers are slashing prices in pandemic boom areas that attracted remote workers and experienced some of the biggest gains in recent years, while homebuilders are contending with a glut of inventory they can’t sell.

In Australia and Canada — two of the world’s bubbliest markets — economists anticipate a notable crunch.

While requirements that most Canadian borrowers be stress tested before they get a mortgage make widespread defaults unlikely, a round of belt tightening that could be felt economy-wide looks increasingly certain. Variable-rate mortgages accounted for nearly 60 per cent of all new home loans at the height of the country’s real estate frenzy earlier this year.

Of the roughly half a trillion Canadian dollars’ worth of variable mortgage debt outstanding, about a third have seen their monthly payments go up in line with the central bank’s benchmark rate, according to research from the National Bank of Canada. Combined with things like lines of credit and fixed-rate mortgages coming up for renewal, these rising interest payments could collectively shave 0.65 per cent off Canadians’ collective disposable income over the next three years, the research shows.

“We are at risk of seeing a material slowdown in spending activity,” said Robert Kavcic, an economist at the Bank of Montreal. “We’re not technically forecasting a recession, but we’re very close.”

The alarm bells are perhaps ringing the loudest in Australia, where home prices in August recorded their largest monthly decline in almost four decades. While cashed-up households have so far shown resilience to rising interest rates, a pinch point will come next year, with billions in mortgage loans fixed at record-low interest rates coming up for refinancing. In Australia, fixed-term loans tend to be for a relatively short duration of two to three years.

That stands to hurt homeowners such as Sindhuja Vetcha, a 30-year-old architect who dipped her toe into the Sydney property market last May, hoping interest rates would remain at record lows. But as the price of everything from petrol to food surged, loan repayments for her two-bedroom apartment in Sydney’s west also started going up rapidly. She’s already paying AUS$260 (US$178) a month more just for the 40 per cent of the loan that was on variable term, and rates are tipped to rise still further.

At the same time, the value of her home has taken a beating — similar properties are currently being advertised for around AUS$70,000 less than she paid — meaning it will be a while before she is in positive equity again.

“It’s way beyond what the property will ever be worth any time in the near future,” Vetcha said.