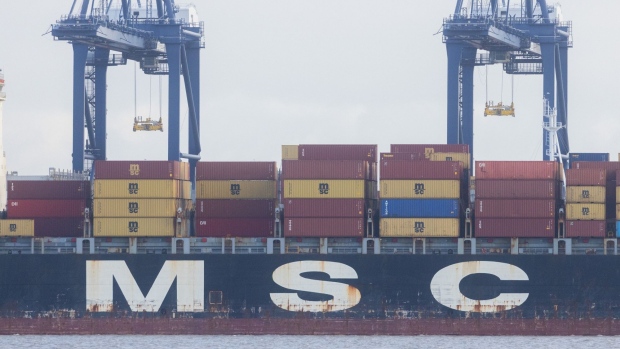 The MSC Marianna container ship at the Port of Felixstowe Ltd. in Felixstowe, U.K., on Thursday, Jan. 20, 2022. The Danish carrier AP Moller-Maersk A/S has been overtaken by Mediterranean Shipping Co. in terms of capacity, according to data compiled by Alphaliner Photographer: Chris Ratcliffe/Bloomberg , Bloomberg

MSC filed an expression of interest in state-owned ITA to the Italian government detailing the plan, it said Monday. Lufthansa, which would act as an industrial partner, has confirmed its interest in the project, the release said.

The German carrier, however, isn’t planning to buy a stake in ITA in the immediate term, Il Sole 24 Ore reported Tuesday. Lufthansa remains interested in an industrial and commercial partnership with the airline and doesn’t rule out owning a stake in the longer term, a spokesperson told the financial daily.

ITA, the successor to defunct flag carrier Alitalia, is attractive for the synergies it would offer in both the cargo and passenger sectors, according to MSC, which last year overtook A.P. Moller-Maersk A/S to become the world’s largest container line by capacity and also operates a cruise business.

Interest in ITA has heated up since it began flying in October as a replacement for Alitalia. Chairman Alfredo Altavilla has made no secret that he is positioning it for an investment from a major airline in an industry dominated by bigger players. He set a goal of finding a deal by the end of this year and Lufthansa’s name has come up more frequently than others.

MSC said it requires a period of 90 business days to conduct exclusive talks on a potential deal.