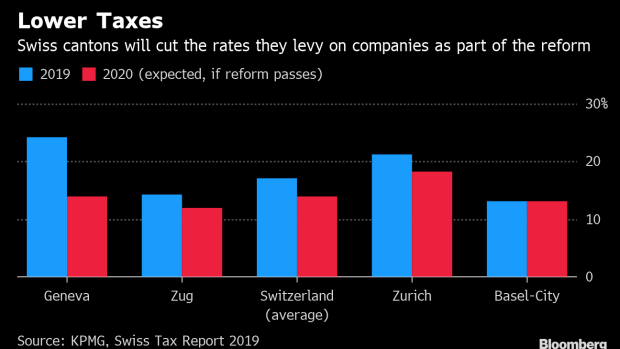 The property is a reminder of a time when millionaires parking money in clandestine accounts made a beeline for Geneva. Although the city has largely recovered from the end of secrecy at banks, whose numbers have shrunk by a quarter, Geneva faces questions about its allure for international businesses and the world’s wealthy.

It wasn’t the city of choice for the likes of Netflix Inc., Alibaba Group Holding Ltd. and Amazon.com Inc. to base their European operations. The city, surrounded by the Alps and the Jura mountains and with a view of Mont Blanc, still has its resplendent landmark hotels, but they don’t get the fillip they once did from rich Arab guests each summer. Apartment blocks farther afield from the 1960s and 1970s look like they need a face lift, and the United Nation’s historic 1930s building is due for a renovation.

“Sometimes I have the sense that we’re not hungry enough,” said Thierry Lavalley, general manager of the lake-facing Grand Hotel Kempinski Geneve. Perhaps because of the city’s high standard of living, “(we) have the impression that not much can happen to us—we’ll get out of whatever happens because we’re Switzerland.”

That complacency will be tested again on May 19, when the Swiss vote on ditching the special tax breaks that only multinational companies now enjoy, with individual cantons proposing their own lower corporate tax rates.  The canton of Geneva—home to a long-established private banking sector managing hundreds of billions of dollars in assets and one of the world’s top centers for oil trading—is pitching the biggest cut in the headline company tax rate. With the vote, Switzerland would comply with international rules on corporate tax dodging while ensuring companies don’t flee to fiscally appealing Ireland or Singapore.

QuickTake: What Swiss Vote on Taxes Means for Multinationals

Also on the ballot is a measure that may put the country’s participation in the border-free Schengen area at risk. The item on gun-control seeks to bring Switzerland in line with its European neighbors. Though not a member of the European Union, Switzerland has agreed to adopt elements of EU law to participate in the Schengen accord. Rejecting the gun reform could catapult the country out of the accord it has been a part of since 2008.

Getting kicked out of the Schengen area would be a serious blow to Geneva, which directly abuts France. Some 84,000 people commute across the border to work in the canton of 500,000 each day. It would also make the country less attractive to many overseas visitors who would need a separate visa for Switzerland.

Polls show both measures are set to pass at the national level, with voters favoring Schengen over guns by a comfortable margin. There’s a bit more opposition to the tax reform on concern it would lead to a higher tax burden for individuals and cuts in public services. The Swiss shot down an earlier version of it two years ago. They also came close to enacting tough new immigration restrictions that would have made it harder for firms to bring in skilled personnel—not exactly laying out the welcome mat.

“It’s clear for a company that doesn’t have to be based in Geneva—they begin to think,” said Bertrand Maag of commercial property adviser SPG Intercity Geneva SA. “The economic framework and the rules are changing and if you want to keep companies in Switzerland, you have to adapt.”

A lot is at stake. Multinationals account for some 76,000 jobs and over 40% of Geneva’s gross domestic product, with a substantial knock-on effect for other areas of employment, according to Groupement des Entreprises Multinationales, a local industry body.

A study by McKinsey determined that Switzerland’s attractiveness has diminished. In addition to some of the newer U.S. technology giants choosing to base their European hubs in the Netherlands, Luxembourg, Ireland or the U.K., Switzerland has lured just 5% of China’s top 250 companies. Corporations also began shifting high-value functions away, the report entitled “Switzerland — Wake Up’’ found.

In Geneva, expatriate demand for luxury residences has waned and rents for office space are down, according to Herve Froidevaux, the regional head at consultancy Wuest Partner. That’s partly because more properties have been built and staff housing allowances aren’t quite as generous. While banks and commodity trading houses typically seek top locations, newly arriving companies in the healthcare, big data or crypto sectors want space that’s “cheap and functional but not extravagant,” he said.

Yvan Cardenas, the finance chief of Swissquote Group Holding SA, an online financial services firm, sees parallels with the 1980s, when Switzerland’s watch industry seemed doomed in the face of Japanese competition. Yet Swiss watchmakers are “alive and they’re still growing, but they had to change the business model and they had to reinvent themselves,” he said.

With the World Health Organisation, the Red Cross and the particle physics laboratory CERN in the Geneva canton, science and healthcare may be areas for growth. Western Switzerland is home to more than 1,000 companies in fields like oncology and medical technology. Eye-care manufacturer Alcon Inc., spun off from Novartis this year, chose the city as a base.This week, French energy giant Total SA said it plans to move its natural gas trading operations from London to Geneva and Paris.

Switzerland also remains the world’s no. 1 destination for cross-border wealth, thanks to its high-quality banking service, according to a Deloitte report. Patrick Odier, managing partner at 223-year-old Cie. Lombard Odier SCA, Geneva’s oldest bank, remains optimistic, while conceding the city could bolster its mojo.

“It’s clear that Switzerland is much more resilient and did not depend as much as people said on banking secrecy,” he said. “It’s a city that needs to look to the future with more confidence.”

--With assistance from Hugo Miller, Dylan Griffiths and Andy Hoffman.

To contact the author of this story: Catherine Bosley in Zurich at cbosley1@bloomberg.net

To contact the editor responsible for this story: Vidya Root at vroot@bloomberg.net, Jan Dahinten