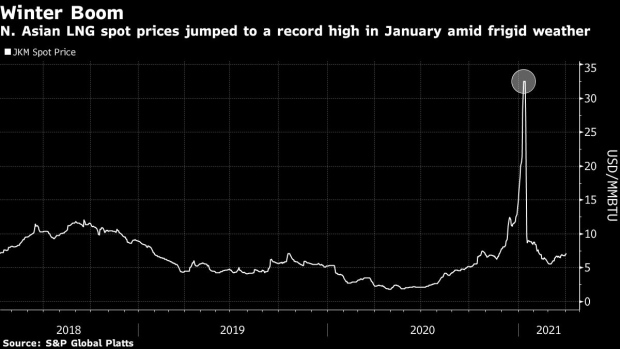 (Bloomberg) -- North Asia’s liquefied natural gas importers are making earlier-than-usual moves to stock up ahead of the winter, after they were caught flat-footed this year by a sudden cold blast that sent spot rates skyrocketing to a record.

China’s Sinopec purchased at least 35 cargoes for delivery between June and February through a tender that closed earlier this week, in part to prepare for the winter when demand for the fuel peaks, according to traders. Other buyers in China, Japan and South Korea are considering following suit, said the traders, who requested anonymity to discuss private details.

It’s uncommon for Asian LNG importers to procure so many winter cargoes in April. The moves illustrate a desire to avoid a repeat of earlier this year when buyers were unable to find affordable shipments. China’s government went as far as to scold the nation’s state-owned gas buyers for being ill-prepared.

A burst of frigid winter weather, coupled with supply disruptions, forced buyers to scramble for cargoes and sent rates skyrocketing. Spot LNG prices for North Asia, home to the world’s biggest importers, surged to $32.50 per million British thermal units in January, the highest on record and 500% higher than the same time last year.

Some traders voiced concern that seasonally low inventories in Europe may pull shipments away from Asia throughout the year. Buyers from the U.K. to Spain may aggressively try to restock supplies this summer, snatching up cargoes from the U.S. and other projects in the Atlantic, they said.