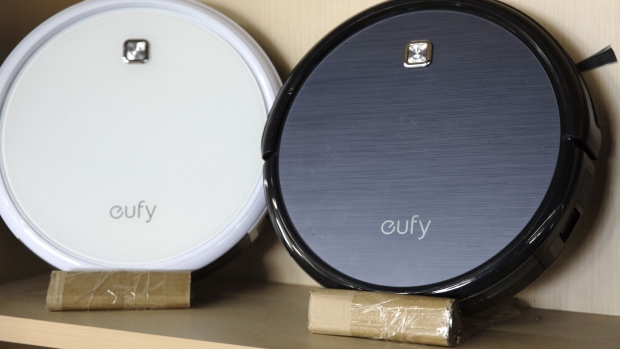 An employee works in the headphones testing lab at the Anker Innovations Technology Co. office in Shenzhen, China, on Friday, May 18, 2018. Anker sells products ranging from smartphone chargers to portable power banks on Amazon.com. and it's getting even bigger after recently reaching a deal to put products in almost 4,000 Walmart Inc. and 900 Best Buy Co. stores in the U.S. , Bloomberg

(Bloomberg) -- A decade ago, then-Googler Steven Yang left California for Chinese technology hub Shenzhen to start Anker Innovations Technology Co Ltd. with less than $1 million in seed capital. Since then, he’s relied on a pioneering strategy of mining consumer reviews on Amazon.com Inc. to pump out some of the world’s most ubiquitous phone accessories.

By studying the thousands of reviews and complaints about electronic products posted on the e-commerce platform daily, Yang realized he could reverse-engineer items like power banks and smartphone chargers to address users’ top pet peeves, starting with portable chargers that would overheat and were too heavy.

Anker now sells $1.5 billion worth of smartphone accessories and other consumer electronics products a year. The signature PowerCore has been Amazon’s biggest-selling power bank the last three years, as tracked by New York-based data consultant Marketplace Pulse, and its products are stocked by Apple Inc. and Target Corp.

To keep growing, Yang now wants to move away from the review mining strategy that built Anker, he told Bloomberg News in an interview, instead developing more sophisticated new products and making the core line faster and lighter.

The company wants to model itself after Sony Group Corp., said Yang, who is also Anker’s chief executive officer, citing the Japanese company’s “countless innovations” over 50 years from the Walkman disc player to Trinitron televisions, which made advancements in color sets.

Anker has also doubled down on making its core line of chargers more competitive. The category contributed just 44% of total revenue in the first half of the year, compared with more than 70% in 2017. In May, it announced a line of smaller and faster chargers capable of powering up devices from a Nintendo Switch to a Macbook Air.

Buoyed in part by a Covid-driven demand for personal devices, Anker reported 41% sales growth in 2020, its highest since 2017. The company’s stock has risen about 65% since its debut in Shenzhen last August, and Yang is its biggest shareholder, with a 44% stake.

“Anker is unlikely to enter a huge category, like cell phones, where there are already well-established players. We are exploring the smaller or less-developed consumer electronics categories,” Yang said. “We want to be a real innovator instead of just making things slightly better.”

Anker’s pivot to devices and products, and not just accessories, comes as the global consumer electronics market is projected to swell 6% to $840 billion this year, according to data from Euromonitor International.

Amid a crowded field, Yang says Anker will lean on the advantage of being close to Shenzhen’s vast electronics manufacturing sector and supply chain, something that’s also helped Chinese giants like Xiaomi Corp. and Huawei Technologies Co. grow rapidly.

“If you have a good idea in China and talk directly to factories near you, the product soon becomes reality,” he said. “A young American may have a similar idea, but the factories are too far away.”

Anker’s non-charger businesses include Eufy, for smart home appliances and security; Nebula, its projector arm, and Soundcore, which makes headsets. Yang said the brands have focused on more innovative products in the last two years than in the past, like high-resolution doorbells allowing people to monitor their front stoops from cell phones, an app-controlled vacuum and a solar-powered wireless security camera.

China’s online retail exports have become more popular with foreign shoppers in the last five years. Last year, cross-border e-commerce surged 40% in 2020 thanks to the pandemic, compared to China’s overall export growth of 4%.After a decade focused only on western customers, Yang also now wants to tap into China’s growing consumer pool. The company aims for a fifth of revenue to come from the domestic market in three years time, up from 3.3% in the first half of 2021.

Still, the company’s ambitions face headwinds like the fiercely competitive consumer goods space in China and growing tensions between Beijing and the west, which are increasingly affecting companies that do business in both places. Amazon, which the company is reliant on for less than 30% of total sales, is also shaking up its operations and cracking down on Chinese sellers for violations including manipulating customer reviews. Anker was not affected and Yang said it supports Amazon’s efforts to remove bad actors from its platform.

Nevertheless, the playing field is more unpredictable and complex now than when Yang started out a decade ago.

Anker’s return home is full circle for Yang, who hails from Changsha, an inland city of about eight million people where Mao Zedong went to college. He studied computer science studies at Peking University before enrolling at the University of Texas at Austin, later spending five years as a Google software engineer.

While at the search engine Yang built an automated system for his then-girlfriend, now his wife, who was selling women’s accessories and other products on Amazon as a side business. The system fixed inventory, logistics, fulfillment and tracking of sales, and it began fulfilling 300 orders a day.

Sensing opportunity, he moved to Shenzhen and started Anker by combining his Google earnings and a deposit from his mother.

Yang said he believes that Anker’s current formula can keep the company growing. “Invest in innovation, and avoid the price war,” he said.