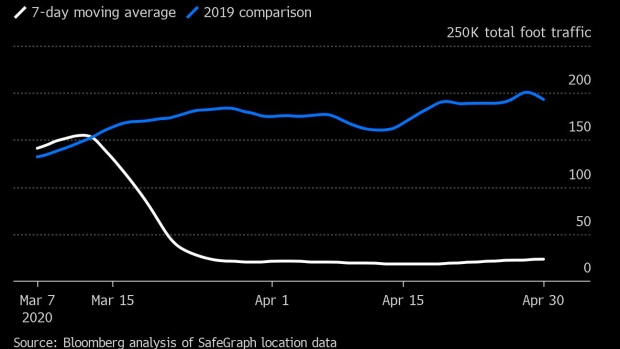 A parking lot stands empty in front of the SeaWorld amusement park in Orlando, Florida on May 15. Photographer: Charlotte Kesl/Bloomberg , Bloomberg

(Bloomberg) -- Memorial Day marks the start of the prime season for theme parks. From now through Labor Day, they typically welcome the lion’s share of guests and generate most of their annual revenue.

But the coronavirus pandemic has left Six Flags Entertainment Corp., Cedar Fair LP and SeaWorld Entertainment Inc., three of the world’s largest theme-park operators by attendance, with idle rides and empty properties. The stocks have been pummeled, and the clock is ticking to squeeze revenue out of a year that has been punishing for the leisure sector.

Executives are talking with local authorities to determine when and at what capacity they can resume operations, and all three companies say they have the liquidity needed to endure hibernation. But there are still questions as to what this will mean for brands that are synonymous with summer in the U.S. The only certainty is that it’s going to hurt.

“What we really do know is 2020 is just going to be an ugly year,” Wells Fargo Securities analyst Tim Conder said. “Investors clearly have baked in that this operating season is going to be significantly negatively impacted by the fallout from Covid.”

All three companies are working with pass holders to make up for lost time created by the pandemic. Together, they operate 53 parks that welcomed about 83.4 million visitors last year, according to Bloomberg calculations.

In regulatory filings, all three identified the summer months as critical. Six Flags generates as much as 75% of its revenue and attendance in the second and third quarter, for example.

Conder said regional parks are attractive to investors because they typically offer stable business models with strong cash flows that perform well in both recessions and bull markets.

But the upcoming season won’t be typical. The three stocks have each fallen more than 40% this year, far outpacing declines among similar-sized consumer companies.

Still, steps taken by the companies to cut costs and boost liquidity have reassured analysts that the parks can make it to 2021.

“People have gotten to that point, past that point” of asking if parks will survive, Conder said in an interview. “And now they’re looking at, ‘Okay, how fast is the reactivation of the parks and reramp?’”

Complicating matters is a patchwork reopening.

Six Flags operates 26 parks spread across the continent. While the company has heralded regional diversity as a strength, it also means parks won’t reopen all at once. SeaWorld and Cedar Fair have fewer locations but are in a similar predicament.

In New Jersey, Six Flags plans to resurrect a drive-through safari experience on May 30. Meanwhile in Orlando, Universal Studios asked Florida officials for permission to reopen June 5, and SeaWorld and Walt Disney Co. are also expected to submit reopening plans.

Park visitors can expect many changes, including much lower capacity. Six Flags announced May 13 it will require electronic reservations. A SeaWorld spokeswoman said the company was exploring the best ways to guarantee a safe reopening.

Wedbush Securities Inc. analyst James Hardiman said in a note Friday that SeaWorld is likely best positioned to open more parks quickly given where it has locations.

Cedar Fair said it’s talking to state and local authorities about reopening, but no dates have been set.

While it’s unclear how demand will fare given the threat posed by the virus, park executives point to surveys and other feedback that indicate former visitors want to come back. Some, like Elizabeth Ringas, are particularly hungry for their next thrill.

“If it wasn’t for the virus we would be there in droves,” said Ringas, the communications director for American Coaster Enthusiasts, a nonprofit group for amusement park fans. “With the unofficial start of summer, Memorial Day weekend, we all crave it.”

Right now, the industry is closely watching Shanghai Disneyland, which reopened May 11 at a fraction of its usual capacity. Tickets sold out fast.

Brad Merriman, a consultant for the theme-park industry, said regional parks could benefit because travelers are more comfortable driving right now, rather than flying. Credit Suisse Group AG made a similar argument in a research note this week.

“Unless something spectacular happens this summer,” Merriman said, “they’ll be ripe candidates I would think for acquisition or consolidation.”