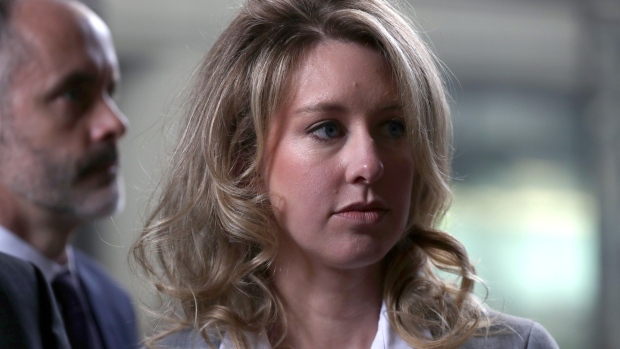 A technician prepares a sample inside the laboratory . Photographer: Anthony Kwan/Bloomberg , Bloomberg

(Bloomberg) -- First, Elizabeth Holmes blamed overzealous journalism for her plight. Now, the founder of Theranos Inc. is exploring whether she can beat fraud charges by asking jurors to delve into her psychological state.

With Holmes facing years in prison, her lawyers have told prosecutors they may tell jurors about a “mental disease or defect” or some “other mental condition,” and they’ve lined up a psychologist whose expertise is violence against women.

A description of what the psychologist would testify about is blacked out in a judge’s order issued last week. But law professors reading between the lines say it looks like Holmes is preparing to claim at least that she was unable to form the intent to commit wire fraud  -- a crucial requirement for her to be convicted --- because she was traumatized from a relationship.

“She can argue because of my mental condition, I was unable to think clearly enough to formulate the intent to deceive people,” said Stanford University law professor Robert Weisberg. The argument is not an insanity defense, Weisberg said, and instead relies on making the case that “my mind was beclouded by a mental condition.”

But to Weisberg and Anne Coughlin, a criminal law professor at the University of Virginia who specializes in feminist jurisprudence, that strategy may be a tough sell to jurors, mostly because Holmes was a dynamic, highly functional advocate for her company.

“To the world, she was presenting herself as educated, self-possessed and affluent,” Coughlin said.

Holmes and her former boyfriend, ex-Theranos president Ramesh “Sunny” Balwani, are accused of falsely claiming Theranos machines could perform myriad tests with a single drop of blood. Federal prosecutors allege they bilked investors out of hundreds of millions of dollars and deceived doctors and patients who trusted the results of the tests.

Though Holmes hasn’t blamed Balwani or their relationship for her actions, Coughlin said it wouldn’t be surprising if she does, as happens frequently when two or more people are accused of committing a crime together.

Attorney Jeffrey Coopersmith, who represents Balwani, declined to comment on the prospect that Holmes will point a finger at her ex-boyfriend.

While Holmes and Balwani initially presented a unified front after they were charged, the judge presiding over the case decided in March -- based on confidential input from both defendants -- that they would be better off having separate trials.

Read More: Broken Love at Theranos May Be Tested in Criminal Fraud Case

In “Bad Blood,” John Carreyrou’s book about the downfall of Theranos, the Wall Street Journal reporter wrote that Balwani had been a presence in Holmes’s life since her college years. After he joined her company, according to the book, the Theranos president demanded complete loyalty and absolute devotion from the staff and exhibited a tyrannical management style. Still, Carreyrou firmly rejected the notion, shared by some in Silicon Valley, that Balwani was “Holmes’s Svengali.”Arguing that she was under her boyfriend’s spell won’t cut it in court, Weisberg said. “It’s got to be a plausible threat,” he said. Holmes would argue that she didn’t want to commit the crime but rationalized that she had no choice, the professor said. “It can’t be, ‘I simply went along with his idea.’”

Kit Kinports, a professor at Penn State Law who teaches about criminal law, said it will be a challenge to convince jurors that Holmes was somehow coerced to commit fraud.

The potential claim reminded Kinports of the 20-year-old who faced the death penalty for the 2013 Boston Marathon bombing and argued, unsuccessfully, that he was under the sway of his older brother who’d staged the explosions with him and was killed in a manhunt.

“Those arguments are hard to make,” Kinports said.

Holmes wants to use testimony from Mindy Mechanic, a clinical psychologist at California State University at Fullerton, according to the filing. Mechanic is an expert on the psychosocial consequences of trauma, and often provides expert testimony in cases involving “interpersonal violence,” according to her faculty profile on the school’s website.

Mechanic didn’t return a call for comment on the case.

The duress defense doesn’t necessarily spare a defendant from being found guilty, but can persuade judge to dole out a less harsh sentence.

Coughlin said the Theranos CEO wasn’t in the same situation as a woman who goes to a bank and passes a bad check “because she was terrified of her abuser.”

“She didn’t look like someone who lacked resources to leave” her relationship, Coughlin said.