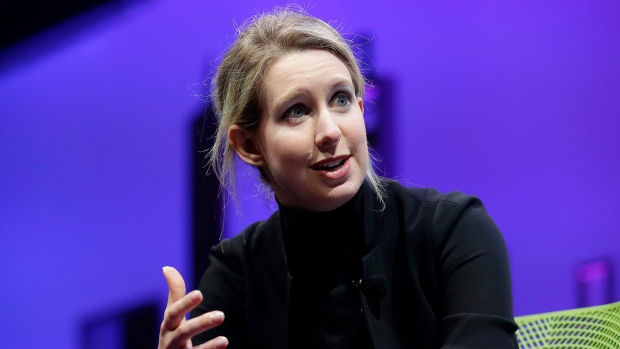 In this Nov. 2, 2015, file photo, Elizabeth Holmes, founder and CEO of Theranos, speaks at the Fortune Global Forum in San Francisco. , The Canadian Press

Theranos Inc. founder Elizabeth Holmes, who reigned briefly as the world’s youngest female self-made billionaire over her promise to revolutionize blood testing, was criminally charged with defrauding investors along with the company’s former president.

The indictment announced Friday by the U.S. Attorney in San Francisco alleging wire fraud follows claims by the U.S. Securities and Exchange Commission that Theranos, Holmes and the company’s ex-president, Ramesh “Sunny” Balwani, lied about their technology while raising more than US$700 million to build the medical-testing startup.

The indictment came out moments after Theranos said Holmes would be stepping down from the blood-testing company that has unraveled amid revelations that her main product was a fraud.

After the testing device that Holmes claimed would be able run hundreds of medical tests on a single drop of blood was shown not to work, Holmes was barred from running a clinical company by U.S. regulators and was sued by investors, and the company let go many of its employees.

Since then, she has been seeking funding for a new venture, a Wall Street Journal reporter who wrote about many of the company’s controversial activities told the magazine Vanity Fair.

Holmes, who dropped out of Stanford University to found the company in 2003, rose to national attention starting in 2013 when she claimed that Theranos had developed a medical technology that could do what seemed impossible: Its secret machines could run thousands of medical tests using the blood from a tiny finger-prick, and do so quickly and cheaply.

As the roll-out with Walgreens neared, Holmes told the company’s engineers to modify standard blood-testing machines to run Theranos’s tests, according to the SEC. She allegedly hid that change from the pharmacy’s executives, conducting demonstrations using Theranos’s machines and leading them on Theranos lab tours without revealing that the startup was using third-party technology.

Regulators claim that at the same time, Holmes was using the company’s glowing profile in the media to raise more money. She and Balwani repeatedly duped investors about the company’s products, its business relationships, and its prospects for long-term growth, according to the SEC complaints. Holmes didn’t admit or deny the SEC’s claims in her settlement, while Balwani is fighting the agency’s suit and has denied wrongdoing.

The company eventually had to retract or correct the results of tens of thousands of medical tests. It was sanctioned by regulators at the Centers for Medicare and Medicaid Services, which banned Holmes from running a lab company for two years. The company let go many of its employees and shut down its consumer-testing operations, and said it would focus on developing its technology.

According to the indictment, Holmes and Balwani used marketing materials, statements to the media and other communications to defraud potential investors even while they knew that their representations about Theranos technology were false.

“Investors large and small from around the world are attracted to Silicon Valley by its track record, its talent, and its promise,” Acting U.S. Attorney Alex Tse said in a statement. “They are also attracted by the fact that behind the innovation and entrepreneurship are rules of law that require honesty, fair play, and transparency.”

Lawyers for Holmes and Balwani didn’t immediately respond to requests for comment.

--With assistance from Kartikay Mehrotra.