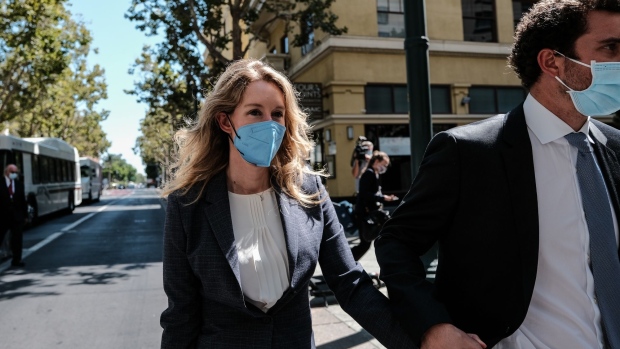 (Bloomberg) -- Erika Cheung told jurors she was “star-struck” when Elizabeth Holmes interviewed her for a job at Theranos Inc. but eventually quit the blood-testing startup because she was “uncomfortable” with how patient samples were processed.

Cheung’s potential to deliver devastating testimony at Holmes’s fraud trial was clear before she took the stand Tuesday. She knows from the inside the deepest secrets at the company Holmes founded, and her decision to speak up about the wrongdoing she claims to have detected at the company is a central reason Holmes faces as long as 20 years in prison if she’s convicted.

She testified that she didn’t believe Theranos technology “was adequate enough” and “after lots of conversations with various executives” she “made the decision to leave the organization” in 2014.

Holmes, Theranos’s former chief executive officer who was once dubbed the world’s youngest female self-made billionaire, is charged with a dozen counts of fraud and conspiracy. She’s accused of lying to patients, doctors and investors about the accuracy and capabilities of Theranos machines.

Cheung, who started working in Theranos’s research and development lab, often donated her own blood for testing.

She maintained spreadsheets of problems she detected, and told federal agents that the company commanded lab employees to toss out data points from blood samples that revealed the inaccuracies of Theranos machines, in order to pass quality-control tests. She told the FBI that Holmes and former Theranos President Ramesh “Sunny” Balwani pushed employees to validate the tests. Balwani faces a separate fraud trial next year and has pleaded not guilty.

Read More: The Spectacular Rise and Fall of Elizabeth Holmes and TheranosCheung also told agents that she raised her concerns with Balwani that hiding the inaccuracies of blood-test results could threaten patients’ health. After Balwani “went off on her,” belittling her and telling Cheung she needed to stick what she was paid to do, meaning process patient samples, she quit, according to the FBI.

The whistle-blower is of “enormous value” to prosecutors because she “on her own formed the view that something was very wrong and fraudulent at Theranos,” said Amanda Kramer, a lawyer at Covington and Burling who isn’t involved in the case. “That’s the view prosecutors are asking jurors to come to.”Cheung has previously described her harrowing experience at Theranos in an HBO documentary and more recently a TED talk. She overcame poverty to get degrees in biology and linguistics at the University of California at Berkeley, to land her first job at Theranos. Lawyers for Holmes tried to block Cheung from repeating her most damaging claims. The only real question is how much leeway the judge handling the trial will give her.John Carreyrou, the former Wall Street Journal reporter whose reporting first exposed what happened at Theranos, said in an email that Cheung was “an important corroborating source.” She also features prominently in Carreyrou’s best-selling book, “Bad Blood.”