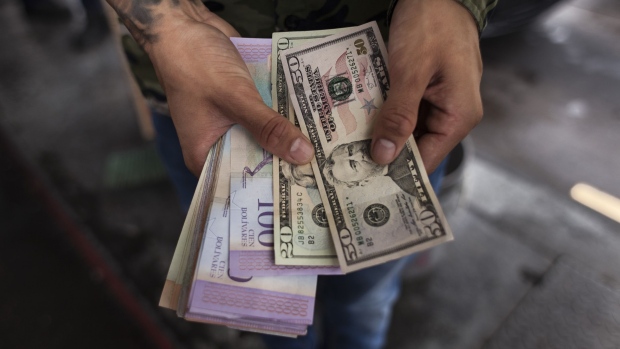 (Bloomberg) -- The U.S. dollar has extended its dominance in Venezuela as locals increasingly turn to the greenback for even the smallest of purchases.

Physical dollars now account for more than half of all retail transactions as the amount in circulation has increased to as high as $2.7 billion, according to data from the Caracas-based research firm Ecoanalitica. That’s three times the value of all the cash bolivars in existence combined with the amount of local currency held in checking and savings accounts, the data show.

The dollar has taken hold of the economy following years of devaluations and hyperinflation that eroded the value of the bolivar to a level that hovers just a hair above worthless, and amid a shortage of local-currency notes. Rather than putting in the work to assemble a big enough pile of bolivar notes and dragging them around in bags, it’s more practical for Venezuelans to conduct their commerce in dollar bills flown into the country as remittances or picked up at exchange houses at the borders of Colombia and Brazil.

While until recently it was illegal to transact in U.S. currency, those restrictions have all but evaporated in any practical sense. Even the authoritarian President Nicolas Maduro, who has generally tried his best to keep an iron grip over the economy, has accepted the transition as the country suffers from a crippling economic crisis that has caused mass emigration amid growing poverty. Things are so bad, and the bolivar so weak, that Venezuela has struggled to print enough physical bolivar bills to keep up with the devaluation.

“That process that they call dollarization can help the recovery of the country, the spread of productive forces in the country, and the economy,” Maduro said in a televised interview last month. “Thank God it exists.”

Venezuela’s reliance on overseas currency also goes beyond greenbacks. Amid sanctions that limit the country’s access to the mainstream global financial system, the state-owned oil company has been known to conduct transactions in Chinese yuan, and the central bank has recently been looking into the possibility of using cryptocurrencies such as Bitcoin or Ether.

More recently, Maduro’s regime has been stuffing the economy with the euros that the government gets from oil and gold sales. New rules require local banks to sell the European currency every week in an effort to reduce pressure on the bolivar. There may be as many as 1 billion euros circulating in the economy at this point, according to Asdrubal Oliveros, the director of Ecoanalitica.

With Bloomberg’s local inflation gauge -- the Cafe Con Leche Index -- running at an annual rate of 8,900%, it’s unlikely the bolivar will be making a comeback anytime soon. In the meantime, it’s gonna take 40,000 of them to buy a dollar.

--With assistance from Fabiola Zerpa.

To contact the reporter on this story: Alex Vasquez in Caracas Office at avasquez45@bloomberg.net

To contact the editors responsible for this story: Patricia Laya at playa2@bloomberg.net, Brendan Walsh, Dave Liedtka