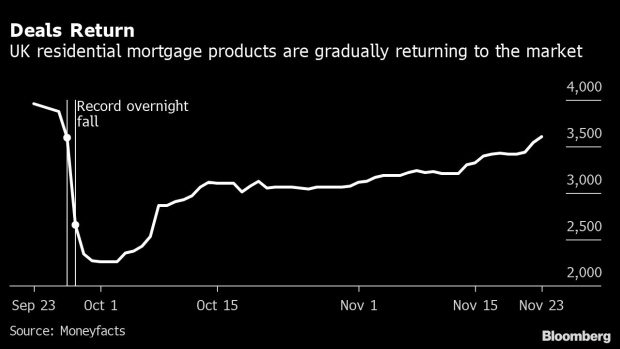 A sale board outside a house for sale in Colchester, UK. , Bloomberg

Deals for home loans are available at volumes last seen in late September, in a glimpse of stability for Britain’s chaotic housing market.

Borrowers can now access 3,603 residential mortgage products, up from 3,540 on Tuesday, according to Moneyfacts Group Plc. That’s the highest since a record overnight fall on Sept. 28, when soaring market rates in the aftermath of then-Prime Minister Liz Truss’s mini-budget forced lenders to pull products.

It’s another bit of breathing space in the UK housing market after the cost of a five-year fixed-rate mortgage fell below 6% for the first time in almost seven weeks on Tuesday. The average five-year deal stayed at 5.95% on Wednesday, while an average two-year deal rose slightly to 6.14%.

A crucial rate used by lenders to price mortgages has also recovered from the leap triggered by September’s mini-budget. The two-year swap-curve reference rate for UK banks’ home loan pricing has reversed after rising 1.5 percentage points during Truss’s tenure, relieving “much of the considerable pain in the mortgage market,” according to a Bloomberg Intelligence report.

Still, the housing market remains on shaky ground. Back in January 2021, there were 5,315 deals available in Britain, which is 48% higher than today’s count. And monthly home loan payments are set to double for many of the 1.8 million households due to refinance in 2023, according to the BI report, which cited data from industry body UK Finance.

The Office for Budget Responsibility said last week that mortgage rates will stay close to 5% for the next five years, with rates set to peak in the second half of 2024. The OBR also expects house prices to fall 9% over the next two years through the third quarter of 2024, before returning to growth.