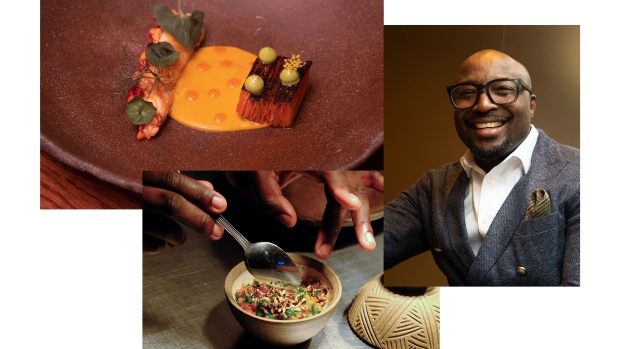 (Bloomberg) -- African cuisine is not a new phenomenon in London. West African take-out shops have been part of the fabric of local high streets for decades. They’ve been the place for dressed-up families or groups of friends to go for meals after church on Sunday or on the way home from a hair salon. They’ve simultaneously been a gathering spot, a gossip hub, and a reminder of home cooking for London's burgeoning African population.

The places have traditionally ranged from fast-food restaurants that offer prepackaged rice and meat or places with long tables for sit-down service specializing in the kind of stews you eat with your hands using balls of doughy fufu, or yuca. The portions are generous, but the experience was insular, and the food quality wasn’t always high enough to attract a wider clientele.

Then, in 2013, Nigerian restaurant Enish opened its first location in Lewisham, southeast London, offering well-made versions of such classic dishes as rich, tomato-y jollof rice and suya, or spicy meat skewers. The place began attracting diners from all over London, and a string of locations opened around town.

Less than 10 years later, restaurants from all over sub-Saharan Africa have become the most exciting places to eat in town. Operators from Ghana, Nigeria, Capetown and elsewhere are opening restaurants that range from homey spots with cooking a grandmother might recognize to high-style dining rooms with knockout cocktails, a strong backbeat and artfully arranged dishes.

This range is a big part of the cuisine’s burgeoning appeal, according to chef Akwasi Brenya-Mensa, who helms Tatale, a dynamic, casual dining room at the Africa Centre in South London. “There are lots of varying types of African restaurants in London,” he says. “I view our food as a spectrum, and I think that it all needs to work as a spectrum in order to build out.” His menu is littered with references to his mom and the aunties from whom he learned to cook.

Nky Iweka, chef and owner of Pitanga, moved to England from Nigeria in the 1980s, when she was 15. “I always wondered why Nigerian food wasn't as ubiquitous as other cuisines at the time.” The food, she adds, “was not always accessible to people who weren’t Nigerian and was not very welcoming from the outside.” She opened Pitanga in 2018 to show off expertly prepared Nigerian cooking with the occasional British influence. (She serves halloumi suya and the “Full African” breakfast with bacon and sausage to go with spiced scrambled eggs and honey beans.) “People say it's like eating in someone's front room. That's what I wanted, that sort of home away from home.”

At the upscale restaurant  in central London’s Fitzrovia, new chef Ayo Adeyemi believes that attitudes toward Nigerian cuisine are changing. “West African food is normally perceived as quite rustic—or that it can’t be made elegant, which I think it can be,” he says about his £120 ($143) tasting menu with dishes such as lobster-studded pepper soup. “I don't want to be known as a chef that's just only cooking for Black people, cooking for Nigerian people. I want to be able to cook for everybody, for everyone to experience West African food.”

Adeyemi says he and Akoko owner Aji Akokomi are planning a new site in London next year, which will be more casual.

The list that follows below is far from exhaustive; an inventory of all of London’s African restaurants would fill a book. But these places and the people behind them show off the terrific range of styles and food that can take even the most seasoned food lovers on a journey. They highlight the evolution of the dishes these chefs grew up with and the powerful flavors with which London is becoming ever more familiar. As for those classic spots, the post-church, post-hair salon destinations? Stroll down a high street and you’ll find them as crowded as ever.

Tucked behind Oxford Street, this restaurant offers a high-end experience of classic West African cooking. Recently appointed executive chef Ayo Adeyemi offers a £120 tasting menu with his signature smoky, tender jollof rice accompanied by blue lobster with carrot sauce and supple carrot terrine that represent his take on classic Nigerian cuisine. The restaurant design is sleek and minimalist, with contemporary African art adorning the walls and stylish plates and bowls in service. The smart cocktail list includes rum and coke made with kola nuts and a Scotch bonnet-infused vodka soda.

Pan-African restaurant Tatale opened this summer at the Africa Centre in South London in a colorful room draped with classic kente fabrics from the Volta region. Chef Akwasi Brenya-Mensa prepares dishes that have a connection to his South London childhood and visits to Ghana and South Africa. He wants the place to feel like a West African chop bar—a communal dining hall in Ghana. The star of Brenya-Mensa’s current short, sharp menu is buttermilk fried chicken imbued with hot African peppers. Later this year, he will introduce a set menu with opportunities to taste more of his inspired cooking.

A new entry in Mayfair’s fine-dining scene is Stork, which counts as neighbors the Royal Academy of Arts and Ralph Lauren’s flagship outlet. This high-energy restaurant feels like a club: An oversized portrait of Grace Jones presides over the room and its addictive Afrobeat soundtrack. Beautifully presented dishes include the West African classic chicken suya and red red, a Ghanaian dish of beans in tomato stew that head chef Taalib Adanse cleverly serves in a roasted plantain. (These might be London’s best plantains.)

Nky Iweka’s cute cafe in Fulham offers an extensive array of West African dishes, some classic and some not. Her nostalgic menu is stocked with thick stews and assorted meats like her grandmother’s slow-roasted goat curry. Many of the dishes are not unlike ones you’d find in high street restaurants but with such tweaks as plantain cups filled with jollof rice. A standout dish: the dessert of grilled bananas in a palm wine reduction, served with ice cream and crushed peanuts.

A few steps from the mad bustle of Piccadilly Circus, Papa L’s is a new, laid-back place with friendly servers and an African fusion menu and music ranging from reggae to old-school soul classics. Owner Lawrence Gomez, aka Papa L, hails from Gambia and sprinkles foods and spices from his native country through the menu, including tempura kanja (okra) with housemade chili salt and seared scallops with smoked paprika relish. The cocktails have a Caribbean vibe, such as the Rum Jerre Jeff topped with ginger beer.

Kudu’s growing South African culinary empire in South London includes a restaurant, a grill place, a cocktail bar and an art gallery. The first thing you’ll notice about Kudu Grill is that the open-fire spot is set in a former pub and exudes the coziness of one. Chef-owner Patrick Williams specializes in his native braii cooking, using specially imported wood from South Africa to grill such dishes infused with sweet, smoky flavor as prawns in peri peri butter, pork chops in sweet-tangy monkey gland sauce and a dry-aged T-bone with beer-pickled onions. The all-African wine list is well curated.

One of the hottest restaurant in the past two years has been the Brixton storefront Chishiru from powerhouse chef Adejoke Bakare. The cozy restaurant has landed on several best-of lists, including the UK’s Top 100 Restaurants this year. Bakare specializes in authentic dishes from her native Nigeria with delightful twists such as sinasir, or fermented rice cakes, topped with a sweet carrot sauce, and asaro, a spicy Nigerian mashed yam stew. The chef recently closed her restaurant and says she’ll reopen it in 2023 after she completes her quest for one in Central London.