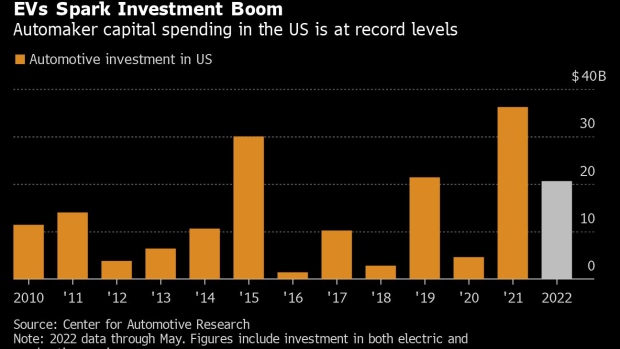 The 3,600 plot of land near Stanton, Tennessee is going to be home to Ford's newest EV plant. , Photographer: Houston Cofield/Bloomberg

They had won Ford over by dangling huge incentives, and Whitmer knew Michigan needed to do more to compete. So she pleaded with lawmakers in a letter last October to put “more tools in our economic toolbox to attract private investment.” Two months later, they delivered, handing her a $1 billion fund for corporate subsidies. And a month after that, Whitmer dipped into the fund to net a giant deal from General Motors Co.: a $6.6 billion electric-truck factory and battery plant.

Michigan’s largesse -- and Tennessee’s and Kentucky’s -- was made possible in part by hundreds of billions in federal aid pumped into US states as part of President Joe Biden’s American Rescue Plan. The money was meant to soften the blow of a pandemic-induced fiscal apocalypse that never happened. Instead, it’s left states flush with cash, supercharging competition to win the automotive jobs of the future and cushioning the bottom lines of companies like Ford, GM, and Panasonic Holdings Corp., a battery supplier to Tesla Inc.

There’s a risk that all the money sloshing around amid the EV development frenzy will fund boondoggles, like Foxconn Technology Group’s heavily subsidized television factory in Wisconsin that never materialized.

To counter that risk, state and local officials helping to fund this EV boom say they built in protections to keep taxpayers from getting fleeced. But the stakes are getting bigger: The cost per permanent job for some projects is now eight times the average seen less than a decade ago.

Ford’s Tennessee hub will cost about $414,000 for each direct job, Michigan is contributing $450,000 per GM job, while Georgia committed to forgo revenue that amounts to $212,000 per job to win megaprojects from Rivian Automotive Inc. and Hyundai Motor Co. in the past two years, according to data compiled by Bloomberg. The average per-job cost of economic incentives in the US was about $52,000 in 2015, measured in today’s dollars, according to a study by Tim Bartik, an economist at the W.E. Upjohn Institute for Employment Research in Kalamazoo, Michigan.

States have been competing to lure companies since at least the Great Depression. But the scale and the ferocity of it now -- for EV plants, semiconductor factories and other megaprojects -- are unprecedented.

“I have never seen the same kind of surge in subsidies all across the US all happening at the same time,” said Michael Farren, a senior researcher at the Mercatus Center at George Mason University and a critic of corporate incentives. “It’s pretty clear that there’s an external motivating factor, and that is the American Rescue Plan relief funds.”

Companies that receive incentives saved an average of 30% on state and local taxes as of 2015, a rate that had tripled since 1990, according to the study by Bartik. The same study found incentives don’t correlate strongly with states’ current or past unemployment levels, or future economic growth.

To skeptics, of whom there are many in academia and policy circles, these subsidies are a poor use of state resources that could otherwise be earmarked to hospitals or schools. The incentives create a race-to-the-bottom effect where local governments furiously try to one-up each other on handouts that deliver unproven payoffs. There’s also a question as to whether EV and battery plants will employ as many people or pay as well as combustion-engine cars.

“States have justified huge subsidy packages for assembly plants in part to capture the more numerous upstream jobs, but those jobs are clearly going to shrink a great deal,” said Greg Leroy, the executive director of Good Jobs First, which has written a report on the subject.

The $350 billion that Congress set aside for states and municipalities in May 2021 is coinciding with a once-in-a-century transformation of the auto industry, as carmakers prepare to retire the combustion engine in favor of battery power. While there are strict limits on how local governments can use the Covid relief money, the aid helped free up cash for corporate incentives.

Financial disclosures vary by state, and some withhold data at the behest of a company or to stay competitive against other states. This makes the full picture of corporate incentives incomplete.

What is known is that global carmakers and established battery manufacturers have announced plans to invest at least $50 billion into at least 10 states to build EV assembly and battery plants since the start of 2021, and states have made commitments totaling at least $10.8 billion to lure those investments, according to a tally of publicly disclosed incentives by Bloomberg and Good Jobs First. That figure almost certainly underestimates the actual number.

The electric-vehicle hub that Ford and battery partner SK Innovation Co. chose to locate in Tennessee is a good example of how the full cost of an incentive package typically isn’t made plain to the public.

Blue Oval City, a six-square-mile site an hour’s drive northeast of Memphis, will house an assembly plant making the new electric F-150 pickup and a battery plant that together promise to create 5,800 jobs. Construction will generate 33,000 temporary jobs; once completed, the twin plants and their suppliers will support 27,000 direct or indirect positions, and add $3.5 billion annually to Tennessee’s economy, state officials have said.

When the project was announced, state officials disclosed a $500 million cash grant to be approved by the legislature; local press reports later pegged the cost at $884 million.

In fact, contract documents obtained by Bloomberg show the value of the package is at least $2.4 billion, which includes tax breaks, donated land, infrastructure improvements and short-term wage subsidies from the federal government.

Even that figure is an undercount. It excludes an electricity subsidy provided by the Tennessee Valley Authority, the largest federal utility.

Tennessee officials said Bloomberg’s incentives calculation is “misleading” because some infrastructure investments were made years earlier, and some of the workforce training costs are estimates. They also argue that new property tax revenue, even at a reduced rate, is more than local governments would get without the project.

“Blue Oval City will be transformational for West Tennessee,” said Lindsey Tipton, a spokeswoman for the state’s economic development department. “For future projects, we will offer grant assistance, but at a much lower cost-per-job and more in line with a typical incentive package from our department.”

Ford said its decision was influenced by many factors beyond financial incentives.

“Public-private partnerships are essential for the United States to be a leader in the global transition to electric vehicles,” the company said in a statement.

Even states that have tried to move away from incentives have caved to the pressure to compete for jobs, said Dennis Cuneo, a former Toyota Motor Corp. executive and site consultant who has helped automakers pick locations.

“Incentives are like free agency in baseball -- nobody likes it, but you’ve got to do it if you want to win,” he said.

Georgia, which has emerged as a big winner in the current investment surge, landed two $5 billion EV deals from Rivian and Hyundai that promise to create more than 15,000 jobs. The state offered incentives worth $3.3 billion to win the projects.

“I view the incentives that we put on the table really as Georgia being part-investor in these projects,” Wilson said in an interview. “We know the payroll for those jobs and the benefits they provide are going to trickle out and benefit the health of communities and families all across the state.”