After a week of fresh highs, Canadian stocks are still cheap.

The S&P/TSX Composite Index is trading below the five-year average of its forward price-to-earnings ratio, despite hitting seven records since Sept. 13. Relative to U.S. equities, the main Canadian stock gauge is valued about 13 per cent lower. 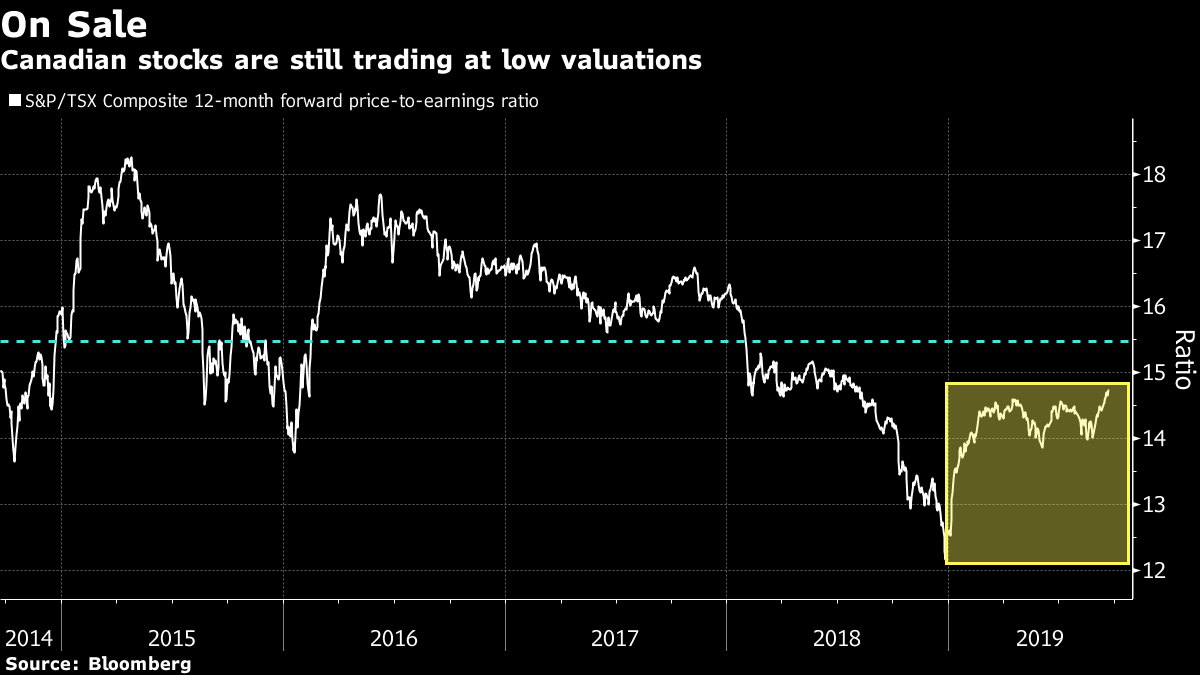 The nation’s stock market has rebounded from a bout of late-summer volatility as global markets plunged, roiled by trade tensions and geopolitical risks. The reversal of momentum stocks, a surge in oil prices and the easing of trade tensions propelled almost 50 per cent of the benchmark index this month. Energy and financial stocks, which were lagging the broader gauge, bounced back.

In a world of low interest rates, “it’s far better to borrow money and buy ownership than it is to buy bonds for example,” said Thomas Caldwell, chairman and founder of Caldwell Securities Ltd.

“The market isn’t a homogeneous thing,” he said. “It’s made up of big caps, midcaps, small caps and in all kinds of diffesinsrent industries. The mid-to-small caps lag the market. So that whole sector is underpriced.”

One technical analysis may shed some light. Bloomberg’s Fear and Greed indicator, a measure of buying strength versus selling strength, for the S&P/TSX rose to a 7-month high during this month’s rally, but still fell short of the January peak. In January, stocks soared 8.5 per cent -- the most since 2009.

Foreign investors may be making a comeback. After four months of net outflows, overseas investors returned with almost $2 billion of capital in July, according to a report from Statistics Canada.

Caldwell acknowledged that markets will continue to be choppy: “There’s a lot of stuff out there that can add some angst on a short term basis.”

“I still think that it makes more sense to be an owner of things in this interest rate environment. You might have pullbacks but I’m an eternal optimist and it has served me well over 55 years in this business,” he said.

Here’s a recap of what happened this week:

Prime Minister Justin Trudeau said he “should have known better” than to wear “brownface” makeup at an “Arabian Nights” theme party 18 years ago. The photos are a serious setback for Trudeau, just weeks before an Oct. 21 federal election.

On the economy front, inflation slowed to 1.9 per cent in August from two per cent in July, after consumers paid less for gasoline and vegetable prices dropped. July wholesale trade sales are expected on Sept. 23.

Trudeau’s latest scandal drowned out most other trending topics on social media this week and only a few events elsewhere in Canada caught the public’s attention.

The Ottawa Senators were in the social media limelight this week over two different events:

The Ottawa Senators sign Thomas Chabot to a long-term deal. Chabot is an elite puck moving / offensive defenseman. Only Roman Josi & Erik Karlsson got the puck out of the defensive zone & into the offensive zone more than Chabot last season. #HotsamBatcho #Sens pic.twitter.com/GzjhJkEmmD

2. Meanwhile, its team owner and Canadian businessman Eugene Melnyk was sued by Mohegan Sun casino in Connecticut over a $900,000 unpaid bill. The CBC separately reported this week that Melnyk’s private jet was seized over an unpaid debt, citing court documents from July. Melnyk’s company disputes the amount but his company voluntarily paid the full amount claimed to the court until the dispute can be settled, according to the report.

Eugene Melnyk goes to court to get jet back https://t.co/2Q7sn1iA37 #ottnews #ottawa pic.twitter.com/IVoUDkdxbX

--With assistance from Esteban Duarte.