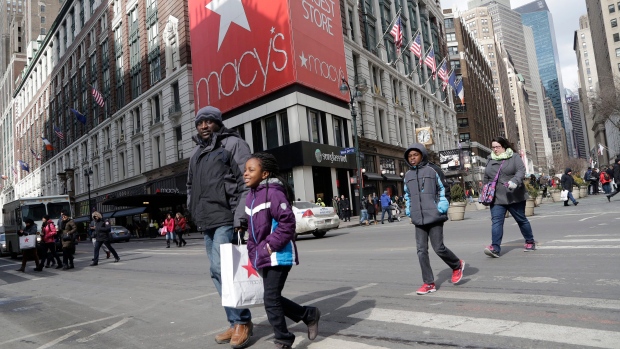 Hudson's Bay Co has made a takeover approach for retail chain Macy's Inc, according to people familiar with the matter, in a deal that would push the Canadian department store operator deeper into the U.S. market.

Talks between the companies are at an early stage, one of the people said. The sources asked not to be identified because the negotiations are confidential. Both Hudson's Bay (HBC.TO) and Macy's told BNN it does not comment on rumors or speculation.

A deal would add another retailer to Hudson Bay's expanding portfolio, which includes Saks Fifth Avenue and Lord & Taylor in the United States, as well as Galeria Kaufhof in Europe.

Cincinnati, Ohio-based Macy's has around 900 stores in the U.S., which includes its Bloomingdale's outlets and its flagship store in New York City's Herald Square.

While Macy's is an iconic name, and host of New York's annual Thanksgiving Day parade, the department store has been struggling through a turnaround, engineered by Chairman and Chief Executive Officer Terry Lundgren, who assumed the roles in 2004.

Lundgren, set to step down this year, has been under pressure from activist hedge fund Starboard Value since 2015.

Cowen and Company said in an analyst note that Macy's has attractive qualities for a buyer, including a low a price to earnings valuation of 10 times, $2.8 billion of free cash flow and a large real estate portfolio. But chances of a deal were dim, the note said.

"Macy's struggling turnaround and the continued pressure it faces from Amazon make a deal unlikely, Cowen said in the note, adding that Amazon itself could be a potential buyer of the company, given its expansion into physical stores.

Hudson's Bay could raise equity and debt against its real estate portfolio to fund the deal, according to the Wall Street Journal, which first reported the news.

“I think there’s a natural opportunity and I think the owners of HBC have shown a hunger to buy assets and turn them around," Mark Satov, strategy advisor at Satov Consultants, told BNN in an interview. "I think what is going to be key to making the deal is an ability to do one of two things – make value out of the real estate and find a way to retire capacity,” noting that American retail real estate is higher per capita than it is in Canada.

Founded in 1670, Hudson's Bay began as a fur trading business and once owned more than 40 percent of what is now Canada.

The Canadian retailer was acquired in 2008 by NRDC Equity Partners, headed by Richard Baker. The executive chairman of HBC, Baker subsequently acquired Saks for $2.9 billion in 2013 in a deal that included a number of valuable real estate properties. The company bought German chain Kaufhof for 2.8 billion euros ($3.02 billion) in 2015.

Activist investor Starboard Value held around 1 percent of Macy's stock as of Sept. 30 last year, making it the company's 15th largest shareholder. The hedge fund had urged Macy's to separate its real estate from its retail business, and to better monetize its real estate assets, which Starboard estimated to be worth $21 billion.

Starboard disclosed its investment in the company in July 2015, when Macy's stock was trading at around $70 per share. Its stock has slumped since.

Macy's said in March last year it had tapped William Lenehan, a real estate investment trust expert and a close associate of Starboard, to its board.