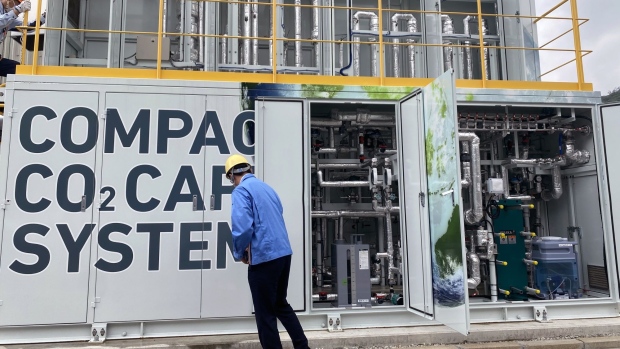 (Bloomberg) -- Technology to remove carbon dioxide from emissions before they enter the atmosphere is still nascent, but many scientists, governments and investors are already banking on the approach to reduce the climate impact of difficult-to-decarbonize industries.

Carbon capture technology operates a bit like a giant vacuum, sucking planet-warming CO₂ from emissions generated by the burning of carbon-intensive fuels. But wide-scale adoption has so far been stymied by the size and expense of most capture systems, which can cost up to $500 million and typically require bespoke equipment and installation.

New standardized, modular designs that are aimed at small emitters could open the door for more widespread use. Japan’s Mitsubishi Heavy Industries Ltd. plans to start introducing a line-up of small to medium-sized carbon capture systems next year, which it says can sequester up to 95% of CO₂ emitted from small polluters like municipal waste incinerators, cement plants or ships.

“Finding modular systems that can work at low-costs for small capacities would significantly improve the business case,’’ said David Lluis Madrid, an analyst at BloombergNEF. “Small scale plants have been highly uneconomical with current technology.’’

Companies like Mitsubishi Heavy and Carbon Clean are racing to develop capture, storage and utilization technology, known as CCS or CCUS, as industry and countries accelerate efforts to cut emissions and meet midcentury climate targets. The Japanese government estimates the market for the sequestering, transporting and storing CO₂ will expand to nearly $70 billion a year by 2050.

Read more: Carbon Capture: The Vacuum the Climate May Depend On: QuickTake

The technology has faced scrutiny from activists who say it prolongs the life of fossil fuel facilities and generates additional risks associated with storing or transporting the captured CO₂. But researchers are already working on building direct air capture facilities that suck CO₂ directly from the atmosphere that many scientists say will be needed to avoid the worst effects of climate change.

Despite criticism, governments are increasingly looking to the technology to help meet climate targets. The US Inflation Reduction Act passed last month, which increases tax credits given for carbon captured at industrial facilities, could give a boost for such projects, according to Bloomberg Intelligence analyst Will Hares.

Mitsubishi Heavy began developing technology to capture CO₂ from emissions more than 30 years ago and says that over the past year more than 100 firms have expressed interest in its modular capture system. The company plans to begin introducing a range of modules that can capture between 0.3 to 200 metric tons of CO₂ a day using an amine-based solution, from next year. Exxon Mobil Corp. says its LaBarge CCS facility in Wyoming has captured more CO₂ than any other to date. The company says the site sequesters 6 to 7 million tons a year that is then pumped into wells to push out more oil and gas.

Mitsubishi Heavy declined to disclose the price of its compact CCS units. However, the cost of producing these technology is expected to decline as the system is standardized and mass-produced, particularly as opposed to larger-scale systems that are typically bespoke.

Its first installation has already taken place at a biomass-fueled power plant in Hiroshima, in southern Japan. The module is the smallest version and takes up about 10 square meters of space, and is roughly the size of a couple of vans stacked on top of each other. The model chosen by the plant’s operator, Taihei Dengyo Kaisha Ltd., captures less than 1% of carbon dioxide emitted from facility.

Mitsubishi Heavy Industries Engineering's Chief Technology Officer Makoto Susaki acknowledges that an effective transition means moving away from the burning carbon-intensive fuels, but says that CCS devices will help some places in their efforts to decarbonize.

“There will be places that can’t immediately install renewable energy, and have to continue using fossil fuel” for power, he said. “In that scenario, using carbon capture is an option. It’s not the end-goal, as there should be discussion after on how to enable more renewable sources of energy.”