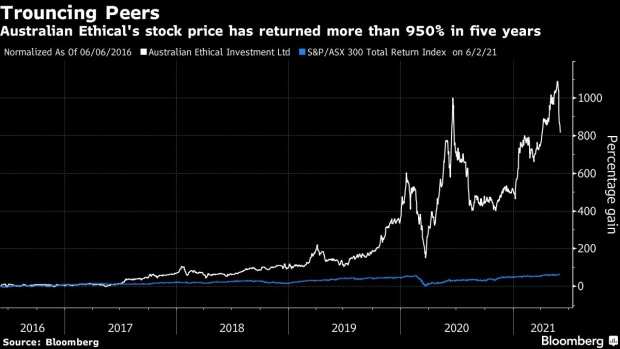 (Bloomberg) -- An Australian money manager that’s been building ESG funds since 1986 is seeing an acceleration in assets under management as demand ramps up from investors following years of slow growth.

“There’s been a seismic shift in the interest and demand for this style of investing,” John McMurdo, chief executive officer at Australian Ethical Investment Ltd., said in an interview in Sydney Thursday. “There is significant momentum.”

The A$5.4 billion ($4.2 billion) Sydney-based money management firm uses an ethical charter that seeks out investments in companies that support practices such as the development of sustainable food production, while screening out firms that practice things like misleading marketing. McMurdo says the company is now seeing an annual growth rate in funds under management of about A$2 billion -- including inflows and market performance.

Funds and strategies that focus on environmental, social and governance factors are booming worldwide amid an uptake from investors and companies to own more sustainable investments. McMurdo says the addressable market -- the audience -- for his funds shot up to between 60%-80% of the Australian population, up from around 15% just two years ago.

The firm’s stock handed investors a return of about 1000% in the past five years, trouncing the 66% gain for the S&P/ASX 300 total return index. Its flagship Australian equities fund returned almost 11% a year since inception in September 1994, compared with 7.4% on the S&P/ASX 300 benchmark gauge.

“There’s a sort of myth that you have to give up investment performance to invest in an ethical way,” McMurdo said. “That myth has been well and truly busted.”