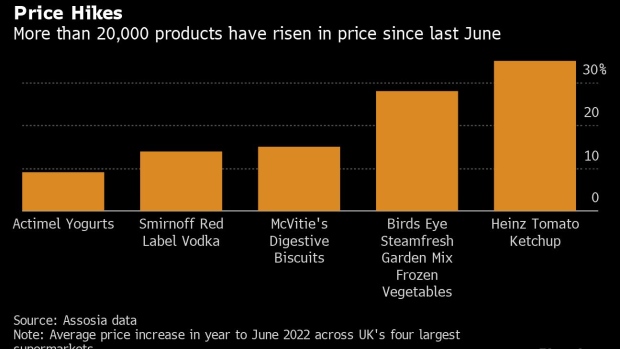 A customer pushes a shopping trolley full of groceries at an Aldi Stores Ltd. supermarket in London, UK, on Friday, June 24, 2022. The Office for National Statistics said Friday the volume of goods sold in stores and online fell 0.5% in May, as soaring food prices forced consumers to cut back on spending in supermarkets. , Bloomberg

UK shoppers seeking to avoid higher bills at the checkout are running out of options after prices on more than half of supermarket items rose in the past year.

With UK inflation forecast to hit double digits later this year and wages lagging behind, the prospects for consumers look increasingly bleak. In another grim milestone this week, data from the Office for National Statistics showed that UK household incomes are on their longest downward trend since records began in 1955.

“The inflation number makes for difficult reading,” Fraser McKevitt, head of retail and consumer insight at Kantar, said in a report. “Shoppers will be watching budgets closely as the cost-of-living crisis takes its toll.”

Based on its latest data, Kantar estimates that the average annual UK grocery bill is on course to rise by £380 ($458).

The fastest inflation in 40 years is pressuring retailers as well as consumers. Britain’s biggest supermarket chains, Tesco Plc and J Sainsbury Plc, are struggling to absorb higher costs and have warned that profits are getting squeezed. Morrisons, the UK’s No. 4 grocer, reported a 6.4% decline in quarterly sales on Wednesday.

Friction over rising prices led to an unusual public spat this week between one of the world’s biggest foodmakers and the UK’s largest retailer. Kraft Heinz Co. said it temporarily stopped supplying Tesco with most of its products, including ketchup and baked beans. The grocer, in turn, said that it won’t pass on “unjustifiable price increases” to its customers.

“A rise in energy and commodity prices combined with supply chain challenges are forcing some manufacturers to raise prices,” said Nidhi Chauhan, senior consumer analyst at GlobalData in London. Retailers, meantime, are striving to “maintain their price proposition” in an increasingly competitive market, she said.

Tesco Can Afford to Squeeze Heinz in ‘Beansgate’: Andrea Felsted

Kraft Heinz said Wednesday it’s working with Tesco to try and resolve the situation as quickly as possible.

Last month, Tesco’s chief executive officer, Ken Murphy, said that consumers were “terrified” of the cost-of-living crisis, and Chairman John Allan previously warned that Britain was edging towards “real food poverty for the first time in a generation.”

Iceland Foods, another grocer, is losing money on its value range of 100 or so store-brand frozen food lines priced at £1 as shoppers trade down from more expensive names, Managing Director Richard Walker said. “We used to have a 25% margin on these lines overall and now they are a loss leader,” he said.

The Assosia data includes more than 43,000 products, ranging from baked goods to drinks, fresh and frozen food and cupboard goods at Tesco, Sainsbury, Asda Group Ltd. and Morrisons. While just over 50% of goods registered an increase in price over the last year, just 7% declined.

Every major UK supermarket had a drop in sales over the 12 weeks to June 12, aside from discounters Aldi and Lidl, according to Kantar data.

In more evidence of the pressure some retailers face, Asda was downgraded to four levels below investment grade last week by Moody’s Investors Service, in line with Morrisons. Both grocers are weighted down with debt after being acquired in leveraged buyouts last year.

Moody’s cited weak trading and questions over Asda’s ability to turn around its performance during the cost-of-living crisis. In response, an Asda spokesperson said it remains focused on keeping prices low and is confident it will “grow the business to become the UK’s No. 2 grocery retailer.”

Scope Ratings said it takes a negative view on European retailers and expects profitability to come under greater strain in coming quarters, according to a new report.

“All in all, profitability will suffer, despite some initiatives started over the last years to diversify businesses and justify higher prices,” said Scope analysts led by Adrien Guerin.