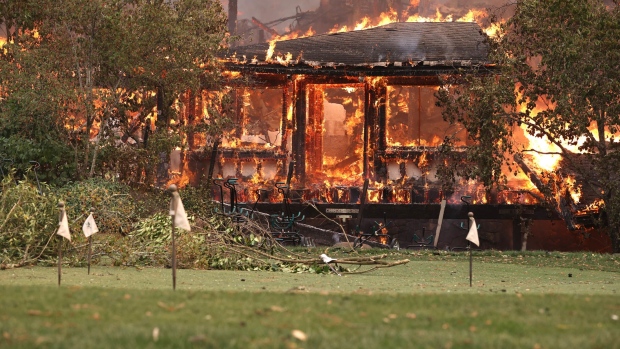 (Bloomberg) -- The balance of power in California’s restaurant world is swinging south, according to Michelin.

On Sept. 28, the guide’s second edition for the Golden State listed 90 starred restaurants, the same number that appeared in the inaugural list in 2019, although the Bay Area, which previously led the state with 57 spots, saw a notable number of places drop from the list. That hit was most apparent in San Francisco which saw 13 of their 30 one-star restaurants fall off the list, principally because of closures. California restaurants had been hard hit since March 2020, with an estimated one-third shuttering, and two-thirds of workers lost their jobs, at least temporarily, because of the pandemic.

Among the San Francisco one-star places that lost designations were Luce in SoMa and the now-shuttered Michael Mina in the Financial District. One of the most notable drops from the list was the Thomas Keller restaurant Bouchon in Napa Valley, which remains open, as well as Baumé, in Palo Alto, which lost its two stars even though it’s still offering take out.

Michelin’s chief inspector, who spoke on the condition of anonymity, declined to give reasons why specific places lost their ranking but said, “Removing a star is an extremely difficult decision confirmed from multiple inspector visits over time as awards are evaluated on an annual basis.”

Earlier in the year, the guide was more generous about keeping stars in place for dining rooms that had temporarily closed or had successfully pivoted because of the pandemic. Among the qualities Michelin inspectors evaluate are, she says, “consistency between visits when deciding a restaurant’s distinction. Our inspection criteria remain unchanged, as restaurants are evaluated on an annual basis.”

Los Angeles, meanwhile, has five new one-star restaurants and two new two-star dining rooms, which offer “excellent cuisine, worth a journey.” Hayato, the seven-seat kaiseki spot in Downtown, joins Melisse in Santa Monica and Addison in San Diego to bring the state’s two-star total to 16, and an increased focus on Southern California.

As in years past, a handy way to get Michelin’s attention is to spotlight sushi. Among the 22 new one-stars (“a very good restaurant in its category”), four have the word ‘sushi’ in the name.

Mattia Agazzi, who creates dishes like risotto camouflaged as pizza at LA’s Gucci Osteria da Massimo Bottura, got the news of his one-star win on a phone call with his mentor Massimo Bottura, who has three stars at his restaurant Osteria Francescana in Modena, Italy.

“It’s very important, especially after a year when we had to open and close,” says Agazzi about the impact of Michelin on business. “When we got stars in the past, it always helped.” (The place debuted just ahead of lockdowns in March 2020.)

Jil Hales, owner of Barndiva in Sonoma, another new starred place, spotlighted the continued stress the restaurant industry is under. “While we are so appreciative of the attention this acknowledgement will bring, we are in the same fraught situation as most of the industry,” she says. “We’re really hoping this will allow us to grow our team, so we can accommodate demand.”

Six restaurants received three stars (“exceptional cuisine, worth a special journey”) including the exquisite Atelier Crenn from Dominique Crenn and the French Laundry, which played a role in the recall election of Governor Gavin Newsom when he dined there in the midst of a November 2020 lockdown. The only place to drop from the top tier was the Restaurant at Meadowood which was destroyed in the Glass Fire. (It has since re-opened as the fast casual restaurant Loveski.)

For the budget-minded, Michelin announced their California Bib Gourmands for 147 restaurants on Sept. 22. That included 45 new places, featuring reasonably priced food (specifically, $40 for two courses, plus wine or dessert). Among the new entries are Dumpling House in San Francisco, and FolkTable in Sonoma, with a focus on farm-to-table cooking.

Here are California’s Michelin winners. An asterisk denotes a new entry; neighborhoods are designated by Michelin.