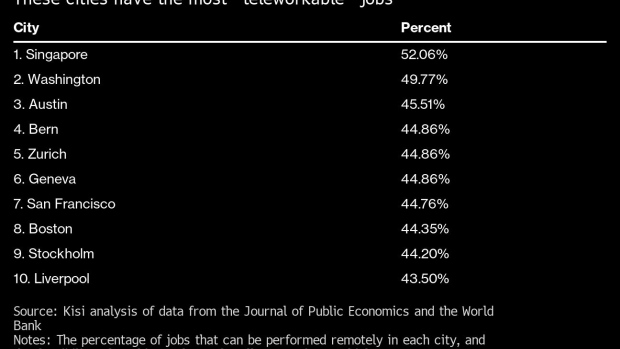 (Bloomberg) -- The best city for work-life balance: Oslo. The most overworked? Dubai.

That’s according to a study released on Wednesday by mobile access technology company Kisi, which looked at factors including work intensity and city livability as well as quality health care, affordable cost-of-living, and ample time off. While a typical worker in Helsinki — number three for work- life balance on the list —  takes a full month of paid vacation every year, for example, the norm in Los Angeles is just one week.

For many, the pandemic has been a time to rethink priorities and make big leaps — like moving to a new city. And as the labor market continues to run hot, return-to-office plans across industries have faltered. Employees have resisted – savoring the flexibility afforded by remote work – and many are prepared to job hop if their company mandates in-person work. Companies like Airbnb Inc. are promising permanent work-from-home policies to entice candidates in an increasingly intense competition for talent.  City leaders looking to capitalize on workers’ newfound mobility and seize the opportunity to expand their tax base and boost their economies  will need to compete across many dimensions.

Against this backdrop, some financial and corporate hubs, which have long been economic powerhouses, ranked poorly. New York City plunged in the rankings, coming in at 59 out of 100 cities, down from 38 the year before and 21 in 2019 before the pandemic took hold. London, while ranked significantly higher, also fell — to 27 in 2022 from 20 the year before and 12 in 2019.

Burned-out workers may instead want to consider Amsterdam, Buenos Aires, or Sydney, where less than 10% of the population is overworked, according to the study. Those who cherish their five-minute morning commute from bed to living room may want to ponder Singapore, Washington D.C. or Austin, where the highest percentage of jobs can be performed remotely at in and around 50%.

Kisi studied  51 U.S. metro areas and 49 major global cities across more than 130 data points — such as rates of overwork, access to health care, and safety metrics to gauge the work intensity, rights and the well-being of inhabitants.

“Recent years have tested the support structures in place for employees around the world,” said Bernhard Mehl, chief executive officer of Kisi. “The ongoing stress and disruption brought about by the pandemic has been followed by war in Ukraine, contributing to global instability that will be felt for years to come.”