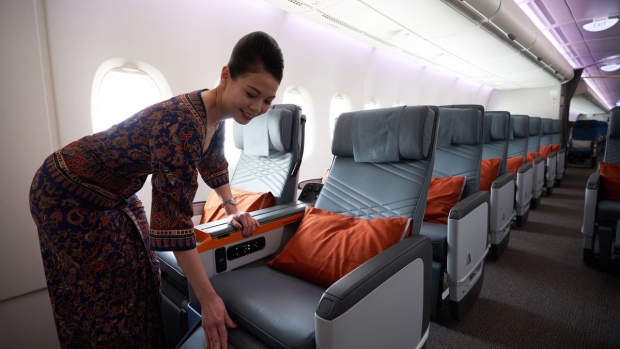 A flight attendant arranges a premium class seat of a Singapore Airlines Ltd. Airbus SE A380 aircraft with refitted cabins during a media tour at Changi Airport in Singapore, on Thursday, Dec. 14, 2017. , Nicky Loh/Bloomberg

Twenty years after international airlines such as U.K.-based Virgin Atlantic and Taiwan’s EVA Air introduced the premium economy concept, the section between coach and business class still represents fewer than 4 per cent of seats in the sky, according to a recent Travelport/Carlson Wagonlit study.

Meanwhile, U.S. carriers have been far more concerned with basic economy—“economy minus” to some—than its premium counterpart. But for fliers who want roomier seats, better meals, larger entertainment screens, and more personalized service without an extravagant price tag, the options are starting to grow.

In the last year, American Airlines Inc. and Delta Air Lines Inc. both rolled out premium economy on international flights while United Airlines has started installing new “Premium Plus” seats aboard a handful of its long-haul jets. Like most premium economy tickets, they tend to cost two to three times as much as coach and half the price of business class.

Why the sudden uptick? Longer flight routes, such as Singapore Airlines Ltd.’s new flight from its namesake hub to Newark, are making comfort as important as affordability; for that 19-hour flight, the airline decided to nix coach service entirely, including only premium economy and business class seats.

“Our premium economy passengers are a mix of leisure travelers on special occasions and business travelers who appreciate the value,” says Phil Capps, head of customer experience at Australian airline Qantas Airways, another carrier noted for its long hauls. Cathay Pacific Airways Ltd.’s senior vice president of the Americas, Philippe Lacamp, agrees. He says these cabins are about making a “trade up” for small business entrepreneurs, not luring executives away from business class.

Wherever you fall on that spectrum, here is a ranking of cabins that most warrant the upgrade from coach, based on such factors as seat size, amenities, availability, and *price. Consider it your handbook to flight survival, both for the hectic holiday season and beyond.

*Fares cited in this story were the lowest available from January-March 2019.

Though Singapore Airlines’ elegant first-class suites and spacious business class seats get much of the attention, the airline’s premium economy is an industry benchmark as well.

Why it’s better than coach: Aboard the airline’s A350s, A380s and some B777-300ERs, seats offer six inches of additional legroom, an impressive nine inches of recline, and such upscale touches as leather upholstery and extendable footrests. There’s also a service called “Book the Cook” that lets passengers pre-order meals designed by a coterie of celebrity chef partners, and noise-canceling headphones let you tune out while watching movies on a 13.30-inch HD touchscreen.

Along with new business-class suites with closing doors, Delta introduced a similarly souped-up Premium Select section last year. You can find it on A350s and select B777-200s and B757-200s.

Why it’s better than coach: Aboard the A350, having one fewer seat per row than economy allows for eight inches more legroom and seven inches of recline. You’ll also get an additional inch of entertainment screen space; adjustable footrests, legrests, and headrests; and several personal stowage spaces. Partnerships with LSTN (for headphones), TUMI (for amenity kits), and Alessi (for serve ware) also add a luxurious touch.

The Australian carrier’s latest and most comfortable premium economy seats, by industrial designer David Caon, debuted last year on the fleet’s B787 Dreamliners.

Why it’s better than coach: These cabins offer two to three additional inches of legroom, three of recline, and seven to eight  of pitch when compared to the back of the plane. They have innovative calf rests engineered to offer better ergonomic support than Qantas’s previous premium economy seats; the new ones offer complimentary adjustable headrests fitted with specially designed pillows. Pull-out shelves for your phone or tablet are a nice extra, as are the dedicated check-in counters at the airport and the self-serve bar for mid-flight snacks, should you feel hungry after a multicourse meal.

Price difference: Every minute counts on flights that can last over 17 hours, so passengers might not mind paying nearly three times as much for a ticket from Los Angeles to Melbourne or Perth to London. (These routes have been running $2,534 and $3,085, respectively.)

One of the best-designed premium economy cabins has rolled out on Cathay Pacific’s A350s, while its B777-300ERs are currently being updated with ergonomic leg rests and additional leg room.

Why it’s better than coach: Six-way adjustable headrests and padded, extendable leg rests mean you’ll always find a comfortable sleep position. These seats are also extra roomy, with dimensions of 20 inches wide and 40 inches of pitch. A small but delightful touch: Aisle-side armrests lower completely so passengers can swivel, rather than get up, to let their neighbors stroll out of the row. Welcome drinks, priority check-in, and generous baggage allowances are icing on the cake.

Price difference: Those additional touches can double the price of a round-trip ticket from San Francisco to Hong Kong (US$1,273, vs. US$665 in economy) and add even more to the cost of a flight from Hong Kong to Sydney (US$1,414, vs. $560 in coach).

Why it’s better than coach: Everything from check-in to security and boarding is expedited when you’re in premium—including retrieving checked luggage. In addition to three inches of additional width and seven inches more of pitch, you’ll get Casper pillows and blankets, small amenity kits, and meals designed by celebrity chefs such as James Beard Award-winner Maneet Chauhan.

Price difference: The upgrade won’t double your fare on major international routes, but it comes close: A round-trip from Dallas to Paris, for example, starts at $555 in economy and US$990 in premium economy.

This antipodean airline has some of the roomiest premium economy seats in the sky, and more passengers will benefit as it expands its long-haul route network.

Why it’s better than coach: Air New Zealand Ltd. takes the top prize when it comes to seat size. All are 19.3 inches wide and have 41 to 42 inches of pitch and 9 inches of recline—plus a 5-inch armrest, so you won’t have to wrestle your seatmate for space. That should compensate for the small entertainment screens—a mere 11 inches wide—as should the Kiwi-sourced wines served with dinner.

This trendsetting airline was one of the first to introduce a premium economy cabin—way back in 1992, when it was called Mid Class. These days, it feels just as fresh.

Why it’s better than coach: Virgin’s leather-covered premium seats are among the widest in their class, at 21 inches. (As with Air New Zealand, though, the entertainment screens are among the smallest, at 11 inches wide.) In service upgrades, expect multi-dish meals served on china, a self-serve snack bar, and priority check-in and baggage-handling services so your luggage comes out earlier at the carousel.

Price difference: A cheap economy flight from New York to London, round-trip, costs as little as US$425; upgrade and it’s upward of US$1,280. The upcharge isn’t quite as steep on other routes, such as London to Johannesburg, where you’ll pay closer to double for premium economy.

Air Canada stands out for its extensive network of long-haul and international flights with premium economy seats; find them on all A330s, B777s, and B787s.

Why it’s better than coach: The perks are standard: up to 3 inches of additional width (depending on aircraft), 7 inches of added legroom, and one bonus inch of recline. Two free checked bags can compensate for some of your ticket cost, as can complimentary wine and spirits. But the real selling point is the almost-ubiquitous availability on routes that cover much of the globe.