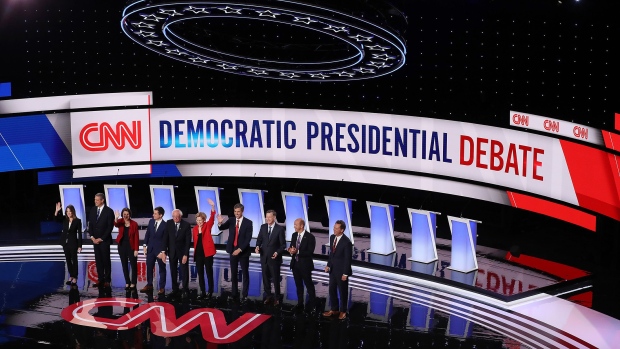 From the opening question to the closing remarks of Tuesday’s Democratic debate, divisions in the party over health care, immigration and how to tackle climate change were on full display.

Progressive front-runners Sanders and Warren presented a mostly united front against moderates including former Representative John Delaney and former Colorado Governor John Hickenlooper who were looking for a breakout moment. For his part, South Bend, Indiana, Mayor Buttigieg sought to make a mark by focusing on his relative youth to emphasize the need for generational change.

One topic that was not discussed: former Vice President Joe Biden, the front-runner who will be on the debate stage Wednesday night. Here’s a look at Tuesday’s highlights.

Sanders to Ryan: ‘I Wrote the Damn Bill’

One of the fiercest exchanges of the night came when Sanders said his Medicare for All plan would be “better” for union workers than the generous health care benefits they currently have.

Tim Ryan, one of the underdogs on the stage, said, “You don’t know that, Bernie.”

Sanders responded: “I do know that, I wrote the damn bill.”

Ryan’s Ohio district has many union workers, including those who are losing their jobs at an idled General Motors Co. plant in Lordstown.

The Vermont senator and Warren of Massachusetts spent the first half of the debate defending Medicare for All against criticisms from several of the other eight candidates.

Before the event, there had been expectations that the two might clash as they are both fighting for the progressive vote. But on health care they worked as a tag team, repeatedly jumping in to defend their plan.

Democratic voters consistently list health care as one of the most important issues in the election. The sparring in the first half of the debate illustrated the wide divide between candidates like Sanders and Warren who want a single-payer system and the moderate Democrats like Delaney, Ryan, Montana Governor Steve Bullock, Minnesota Senator Amy Klobuchar and Hickenlooper, who are calling for more incremental approaches.

In a large field of candidates that overwhelmingly believes Donald Trump is a racist, Williamson separated herself on the debate stage with a detailed answer on systemic racism and reparations.

First, speaking about the Flint water crisis, she said it is “just the tip of the iceberg,” arguing lead would have never infected water in Gross Pointe, an affluent, majority-white Detroit suburb.

“If you think any of this wonkiness is going to deal with this dark psychic force of the collectivized hatred that this president is bringing up in this country, then I’m afraid that the Democrats are going to see some very dark days,” Williamson said.

The author also defended her proposal to pay between US$200 billion and US$500 billion in reparations to descendants of slaves. She referenced “40 acres and a mule,” the plan to give land to newly freed slaves at the end of the Civil War, as justification for the plan.

“We need to recognize that when it comes to the economic gap between blacks and whites in America, it does come from a great injustice that has never been dealt with,” she said.

She added: “I believe that anything less than $100 billion is an insult.”

The need to combat climate change presented a rare point of agreement across the debate stage. Candidates said they largely concurred that aggressive government action is needed to reduce global warming.

“On this issue there is no choice. We have to be super-aggressive if we love our children and we want to leave them a planet that is healthy and is habitable,” said Sanders, one of several who backs Representative Alexandria Ocasio-Cortez’s Green New Deal.

Among the ideas on the table were taxes on carbon, massive increases on spending on renewable energy and carbon capture technology, and curtailing fossil energy development on federal lands.

At the same time, some moderate Democrats have pushed a less aggressive -- and more pragmatic -- approach to curtailing greenhouse gas emissions.

“Let’s not talk about plans that are written for press releases that will go nowhere else,” said Bullock.

Trump dominated the Democratic discussion on immigration and he wasn’t even on stage. Two leading candidates continued to argue that border crossings shouldn’t be criminal offenses, a direct rebuke of Trump administration policies that have led to the separation of migrant families.

“When I talk about health care as a human right, that applies to everyone in this country,” he said.

Their comments come after 10 of the Democratic contenders were asked in the first debates if they would decriminalize border crossings, and all present raised their hands.

But others on the stage Tuesday sought to distance themselves from that position, which could prove risky in a general election. Bullock warned Warren she was “playing into Trump’s hand.”

Warren and Sanders are considered the furthest left candidates in the Democratic field, but there were times throughout the debate on foreign policy and trade when they echoed stances supported by Trump.

Sanders and Trump favor non-interventionist foreign policies and the senator was asked how he would differ from the president as they both do not want the U.S. to be the “policemen of the world.” Sanders didn’t disagree with the assertion but said “Trump is a pathological liar. I tell the truth.”

The trio agree on protectionist trade policies. Sanders and Warren have been longtime opponents of the Trans-Pacific Partnership which Trump withdrew from. It stands in contrast to other Democrats like Delaney who said he supported free trade and would like to rejoin the TPP.

Warren and Bernie TALK about trade.@realDonaldTrump ACTS on trade.

Delaney sought to position himself as the pragmatist on the debate stage. Polling near the bottom of the crowded field, he used his ample speaking time to draw a clear contrast with the progressive wing of the party, sparring with Sanders and Warren on Medicare for All and the Green New Deal.

“I’m as big of a dreamer and an entrepreneur as anyone, but I also believe we need to have solutions that are workable,” Delaney said.

But Warren and Sanders used Delaney as a foil to defend their progressive agenda and push back on his criticisms.

“I don’t understand why anybody goes to all the trouble of running to be the president of the United States to talk about what we really can’t do and shouldn’t fight for,” Warren said. “I don’t get it.”

O’Rourke, who was looking for a signature moment to reboot his fledgling campaign, was largely missing in action Tuesday night.

The former Texas representative entered the race with sky-high expectations after a narrow loss in the Texas Senate race to Ted Cruz. But his support has waned in recent months and he only took in $3.6 million in the second-quarter fund-raising compared to the $6.1 million he raised in the first 24 hours after he announced he was running.

The debate was supposed to help him recapture his momentum, but O’Rourke was overshadowed by the clash between progressives and moderates. Neither the most progressive candidate nor the most moderate, he was caught in between on many issues, unable to draw a clear contrast with the other candidates.

Nonetheless, O’Rourke did draw praise for his answer on systemic racism and reparations, and he has already qualified for the September debate in Houston.

Buttigieg sidestepped a dispute among his Democratic rivals about whether the party should follow a pragmatic path or opt for a broad overhaul of American society.

Republicans will call Democrats “a bunch of crazy socialists” either way, he said.

The 37-year-old mayor of South Bend, Indiana, maintained a moderate stance on several key issues and drawing a sharp contrast with his progressive rivals.

While Warren called for decriminalizing border crossings as a way to fix the border crisis, Buttigieg said crossings should still be illegal, but that most cases would be handled under civil law. When Sanders defended Medicare for all, Buttigieg touted his more moderate “Medicare for all who want it” proposal, saying people would willingly “walk away” from the employer-sponsored options.

The first question on firearms went to Buttigieg, who said the U.S. needs “structural reform” and constitutional amendments to fix the scourge of gun violence. He fired back at his rivals by drawing a generational contrast and saying the gun control debate has been ongoing for the past 20 years -- to no avail.

--With assistance from Ari Natter, Jennifer A. Dlouhy, Laura Litvan and David Welch