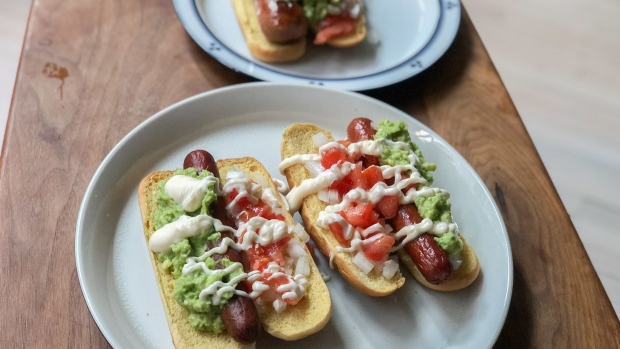 Sooner or later, even the most diehard Thanksgiving fans hit capacity on leftover turkey sandwiches and soup.

For them, and for those who don’t care about the big bird in the first place, consider an unexpected, post-holiday-splurge dish: a fully loaded South American hot dog, courtesy of Virgilio Martinez.

Martinez might seem an unlikely hot dog champion. His Lima restaurant, Central, is a fixture in the upper echelons of the World’s 50 Best list; this year it was No. 4, and it was named the restaurant of the decade in Latin America by the organization, based on cumulative votes. His dishes spotlight local ingredients to such an extent that menus include the altitudes where they can be found, such as a dish called Low Andes Mountains (1,800 meters), comprised of quinoa and dried cow’s heart.

But those are not the recipes to be found in Martinez’s new The Latin American Cookbook (Phaidon; $50). Instead, the chef spent three years compiling 600 recipes from 22 countries throughout the continent. Martinez enlisted his restaurant employees to help do research: “They took me to historians, writers, field cooks, a deeper journey,” he wrote in an email. A lot of his exploration took place on foot: “Hundreds of hours of walking and spending time in the place of origin, where we see and listen to people where they cook.”

Each recipe includes a note that tells a story. Parmesan scallops are one of the simplest recipes in Peruvian gastronomy, writes Martinez, and a major crowd-pleaser at backyard barbecues. Charcoal-cooked rhea egg is a dish that can be found in Argentina, Chile, and Paraguay, made with the eggs from South America’s largest flightless bird.

There’s also a section on perros calientes, otherwise known as hot dogs. In Venezuela, they are called perros; in Guatemala, shucos; and in Chile, completos. Wherever they are, their generous garnishes set them apart from American versions. “The one uniting factor among all of them is that they are usually so overloaded with toppings that it can be hard to find the meat,” writes Martinez.

His Chilean hot dog is based on one called the Italiano, a combination of smashed avocado, a common hot dog topping there, along with onion, tomato, and drizzles of mayo. It gets its name from its colors, which evoke the Italian flag.

What makes the Italiano a great post-Thanksgiving dish is, for one thing, it’s supremely easy to prepare. Chop a little onion, which might be left over from the holidays anyway, and tomato. Mash a couple of avocados. Then fry the hot dogs, a 15-minute process start to finish.

It’s also a good culinary change of conversation from the mellow flavors of Thanksgiving, with the pop of the hot dog, the bright punch of onion, and the creamy tang of the guacamole spread. An optional addition: a drizzle of mustard, a pungent contrast to the mayo flourish and a frequent garnish for hot dogs in Latin America. The dish might lose its resemblance to the Italian flag, but it stays a fun, messy celebration all its own.

The following recipe is adapted from The Latin American Cookbook, by Virgilio Martinez.

Testers note: No surprise, the recipe is also a great vehicle for plant-based hot dogs and sausages.

Heat the oil in a medium frying pan. Add the hot dogs and cook, turning occasionally, until cooked through, about 5 minutes.

Soak the onion in a bowl of cold water for 5 minutes; drain well.

Season the tomatoes with a little olive oil and salt.

Peel and pit the avocados, scoop the flesh into a bowl, season with lime juice, and salt and mash with a fork.

Add a hot dog to each bun while still hot, then add some tomato and onions and mashed avocado. Lastly, top each with drizzles of mayonnaise to taste. Add a smear of mustard, if desired.