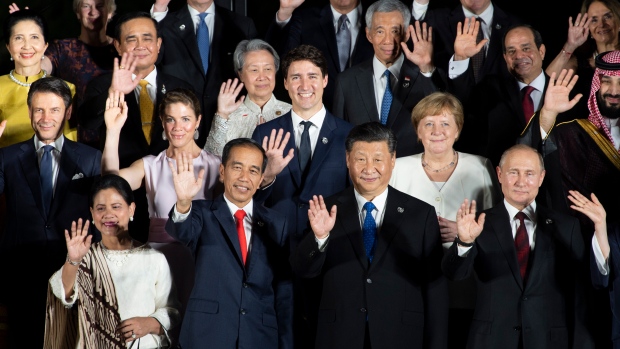 Canadian Prime Minister Justin Trudeau and Sophie Trudeau along with world leader and their partners wave during the family photo with spouses at the G20 Summit in Osaka, Japan, Friday June 28, 2019. , THE CANADIAN PRESS/Adrian Wyld

Some of the most dramatic moments from last week’s G20 summit in Osaka, Japan, turned on the debate about climate change, with U.S. President Donald Trump split from his counterparts on the need for action.

But when it comes to impact on the environment, Trump isn’t the G20 leader with the highest carbon footprint, according to an analysis of international flights taken by leaders of the group in 2018. That unwanted prize belongs to Japan Prime Minister Shinzo Abe, who traveled almost 130,000 miles last year.

Trump took fewer overseas flights than his counterparts, the booking portal From AtoB said in a report on G-20 travel. Asian leaders Moon Jae-in and Xi Jinping also featured high on the list. But like Abe, they typically have to travel further to meet their counterparts.

Meanwhile, U.K Prime Minister Theresa May didn’t make the top five. She took 51 flights, 10 of which were to and from Brussels for Brexit negotiations.

German Chancellor Angela Merkel also didn’t rank near the top, despite taking 83 flights. Her trips were much shorter journeys.

The analysis also takes into account the model of plane used by the various leaders, noting that Trump’s Boeing 747-200B emits the most carbon dioxide of any other plane. It didn’t appear to include support aircraft or staff that often accompany leaders on their journeys.

Here’s a fuller list of the carbon footprint by the leaders:

Note: Australia, Switzerland and Indonesia did not provide any travel information, and the King of Saudi Arabia did not undertake any overseas state travel in 2018.