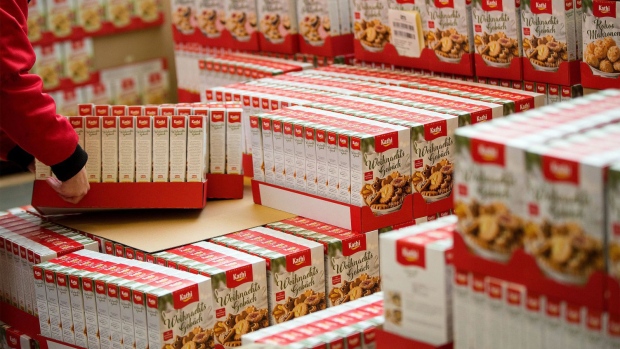 GDR patent documentation from 1969 at the company’s factory. The son of the founders regained ownership after reunification. Photographer: Krisztian Bocsi/Bloomberg , Stefan Nicola and Iain Rogers

(Bloomberg) -- East Germany wasn’t known as a bastion of consumerism, and when the Berlin Wall fell 30 years ago, most of the communist economy’s brands—like the charming, but sputtering Trabant car—failed to make the transition to capitalism.

But there are a surprising number of GDR products that weathered Western competition to thrive in modern Germany. Here’s a look at five survivors:

In 1991, when Rainer Thiele won back control of the Kathi family business the Communists confiscated from his parents two decades earlier, he made good on a promise to his mother Kaethe on her deathbed two years earlier.

Kaethe and her husband Kurt started Kathi in 1951 in Halle near Leipzig, inventing a ready-made baking mixture that soon became a GDR bestseller. In an economy of scarcity, Kathi’s convenience foods—it also made mixtures for dumplings, gravies and soups—flew off the shelves. Yet expansion didn’t sit well with the authorities, who expropriated the business in 1972.

By the time Thiele got Kathi back, sales had collapsed and the company had to compete with more than 20 western brands. Yet Kathi managed to win back market share thanks to investment in machinery and an expanded product line. It sold 28.5 million euros ($31.5 million) worth of baking products last year, up from 1.9 million euros in 1991.

The company, which still produces in Halle, is the second-biggest seller of baking mixes in Germany. And Kathi remains in family hands: Thiele’s son Marco and his wife Susen now run the company.

Forget Coca-Cola. In a corner of eastern Germany, a soda developed six decades ago by a GDR scientist has forged ahead of the mighty U.S. brand as the most popular soft drink.

Vita Cola reigns in the state of Thuringia thanks to its unique blend of citrus oil, vanilla and caffeine. The brand sold a record 89 million liters last year, making it Germany’s most popular domestic cola.

It first hit the shelves in 1958 to fulfill the Communist party’s second five-year plan to improve supply of non-alcoholic beverages. Meant as the GDR’s answer to Coke, Vita Cola quickly became the country’s dominant soft drink, with more than 200 factories filling up bottles with the state-owned recipe. The soda temporarily vanished after East Germany’s collapse in 1990, but local producer Thueringer Waldquell Mineralbrunnen—now owned by Hassia Group, based near Frankfurt—revived it four years later.

Vita Cola consistently grabbed market share, first beating Coke to the top spot in Thuringia in 2000. It’s the No. 2 cola brand in the eastern states and is also sold in western Germany.

Vita Cola still uses the original recipe,  meaning it tastes just as it did behind the Iron Curtain.

The name of the much-loved bubbly wine comes from the distinctive red bottle top and means “Little Red Riding Hood.” The brand traces its roots to the Kloss & Foerster wine business started in Freyburg near Leipzig in 1856 and was first produced under the Rotkäppchen brand in 1894.

Emperor Wilhelm II was a big fan and boosted the firm’s standing when he ordered the wine to be served in German officers’ messes around the beginning of the 20th century.

The hyperinflation and economic crisis that followed World War I hit the company hard, but the 1933 abolition of a tax on sparkling wine helped them get back on their feet before production dwindled almost to nothing during World War II.

Following seizure by the East German state after hostilities ended, output rose steadily to around 15 million bottles a year by the 1980s. Geopolitics interfered again after the fall of the Berlin Wall, when competitive struggles following reunification caused the company to shrink its workforce to a fifth of its 1989 size within two years. A group of former managers joined forces with an investor from West Germany to take control in 1993.

The company now commands more than half the German market for “Sekt,” which accounted for about 60% of sales last year, reaping 660 million euros. Sales of Rotkäppchen, Germany’s leading brand of sparkling white, rose 6.7%.

Bratwurst wouldn’t be complete without mustard, and the medium-spicy variety from Bautzen in Saxony is ubiquitous in supermarkets in the former GDR and also available in western states, making Bautz’ner one of Germany’s best-selling condiment brands.

The yellow paste has been produced since the 1930s. The firm was part of the GDR’s state-enterprise structure and was then snapped up in 1992 by Munich-based Develey Senf & Feinkost GmbH. Within three years, they had ramped up output threefold and today more than two million tubs roll off the production line in Upper Lusatia every month.

“Today, Bautz’ner is not only the clear market leader in East Germany but has made a name for itself far beyond its original distribution base,” said Volker Leonhardi, Develey’s head of marketing.

East Germans fed their washing machines the same stuff for decades, and Spee was by far the country’s most popular detergent.

It was produced from 1968 in Genthin near Berlin at a plant the Russian military expropriated from West Germany’s Henkel AG at the end of World War II. At its height, the factory supplied as much as 80% of the GDR’s detergent.

When the Communist regime collapsed in 1990, Henkel bought the plant back and soon introduced Spee to western consumers, with growing success. Today, Spee is the third-most popular detergent in Germany, after Henkel’s Persil and Procter & Gamble’s Ariel.

While the brand survived, hundreds of jobs at the Genthin plant did not. Henkel moved production to its headquarters in Dusseldorf about a decade ago.

To contact the editor responsible for this story: Chris Reiter at creiter2@bloomberg.net, Chad Thomas