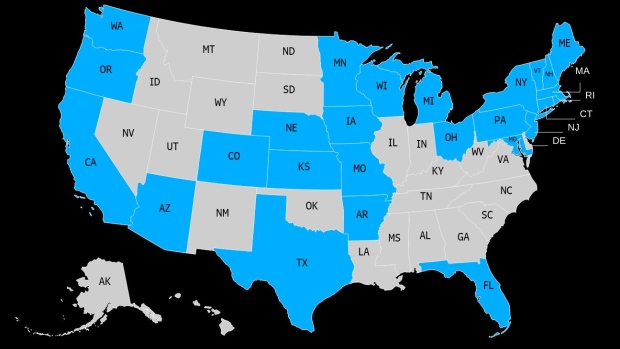 Molly Moon’s Homemade Ice Cream put the scoops away, locked its doors and laid off all but four of the 100 employees at its Seattle-area shops in March when the coronavirus began spreading.

It brought back about 15 in April on a part-time basis to churn out pints of melted chocolate and cookie dough for sale in local grocery stores, a small but crucial step in navigating how to reopen. Now 81 are back, serving takeout cones to customers again at six locations.

Most of them returned through the state’s SharedWork program, which pays them a pro-rated portion of unemployment benefits to offset reduced hours and supplement the wages they receive. Work sharing, also called short-time compensation, is expanding rapidly in the U.S. because it helps businesses avoid layoffs and begin rehiring some of the millions pushed into unemployment by the pandemic.

Twenty-six states have operational programs, and Virginia recently passed legislation to set up its own initiative. Arizona expanded its plan in response to Covid-19, allowing companies to reduce employees’ hours by as much as 60% and still enroll them; its previous cap was 40%.

“Many people have said that this is a great program for exactly the situation we’re in now, because this is not a normal recession,” said Susan Houseman, vice president and director of research at the Upjohn Institute for Employment Research. Short-time compensation helps employers avoid layoffs and “keeps workers attached to their jobs again during what is expected to be a temporary thing.”

The number of people claiming short-time compensation is still just a tiny share of the 30 million people who claimed all types of unemployment benefits in the week ended May 16. The jobless rate surged to 14.7% in April -- the highest since the Great Depression era -- but decreased in May as many Americans headed back to work. At the same time, an estimated 42% of recent layoffs will become permanent, according to a working paper from the University of Chicago’s Becker Friedman Institute.

Some companies may choose not to enroll employees because shared-work programs require them to maintain benefits such as health-care and retirement plans. This could prove too burdensome if they’re confronting steep cuts in revenue.

To encourage wider use, business groups including chambers of commerce are promoting short-time compensation, which some states set up decades ago. The Greater New Haven Chamber of Commerce, for example, talks about Connecticut’s plan in the webinars it hosts each week to assist local companies. States also are publicizing the programs with videos and testimonials on websites and Twitter.

Read more: Shared-Work Programs Save Jobs in States, If Businesses Use Them

The $2.2 trillion CARES Act, which Congress passed in March to provide aid and loans to a wide swathe of American businesses and workers, promised to temporarily reimburse 100% of short-time compensation paid by states with programs. The act also provided funding for states without programs to set them up.

Three Democratic senators have proposed a further expansion, offering participating businesses access to grants covering as much as 50% of fixed costs beyond payroll and increasing the maximum by which employers can reduce worker hours to 80% from 60%, among other changes.

One strong incentive for businesses to use short-time compensation programs now: In addition to the pro-rated unemployment benefits, workers also receive $600 a week of Federal Pandemic Unemployment Compensation. (This is set to expire at the end of July; the Democratic proposal would extend it through the end of the year.) The extra weekly payment means that for some people, a reduction in hours effectively can mean a raise.

“Both from an employer and an employee standpoint, I really like the program,” said Denise Brown, Molly Moon’s director of finance and human resources. With shared work, “we can do part-time hours and not have a negative financial impact on the employees.”

As unemployment agencies struggle to keep up with the unprecedented rise in filings, shared-work programs in some states offer another positive for employers and employees: an easier route to benefit money. Their labor departments have dedicated teams to parse through the applications, bypassing the backlogged main portals; they even allow companies to submit claims on behalf of workers.

“I think that’s the biggest thing: Employees don’t have to go file themselves; it’s all part of one package,” said Garrett Sheehan, president and CEO of the greater New Haven chamber.

For Molly Moon Neitzel, founder and CEO of her namesake Seattle-area ice cream shops, the program offers a way to retain employees she has spent time training and who have in turn become part of the company culture. The former political activist opened her first shop 12 years ago, aiming to create a business that took care of workers with living wages, health insurance and a retirement plan.

“One of the things that makes me work so hard right now is that I just want to be a company that never raced to the bottom, even in an international crisis, but that comes out of this crisis with all of those values intact and those jobs still here for our workers and maybe more,” Neitzel said.