Each of our customers wants more driverless trucks on the road: Gatik’s CEO Gautam Narang

With a shortage of truck drivers in Canada, a tech company is looking to help ease the shortfall with driverless trucks, some of which can already be spotted on roads around the Toronto area.

In early October, Loblaw Companies Ltd. announced that it had started shipping select PC Express orders using fully driverless trucks. The goods move from a store in Toronto’s North York to two hub locations each in Mississauga and Brampton, and one in Etobicoke.

Apart from this, Loblaw is also using autonomous trucks, but with a safety driver on board, on other routes in the Greater Toronto Area (GTA). It has in fact done so since 2020, in partnership with Gatik, a U.S.- and Canada-based tech company.

“Autonomous delivery is complementary to our existing supply chain network. It supplements current routes and improves delivery times and capacity on our middle-mile runs,” Loblaw told BNN Bloomberg, on Nov. 18.

The middle-mile segment, unlike long-haul transport or last-mile delivery to an end consumer, involves business-to-business operations, mostly from a warehousing location to a retail centre.

In an interview with BNN Bloomberg, Gatik’s co-founder and CEO Gautam Narang, said, “Our thesis was that if we constrain the autonomy problem and have these trucks operate back and forth on fixed and repeatable routes, we can get to the point of driver-out faster and safer than any other application.”

Gatik was set up in Mountain View, Calif., in 2017, and its clients in the U.S. include Fortune 500 companies like Walmart, Georgia-Pacific and Pitney Bowes. 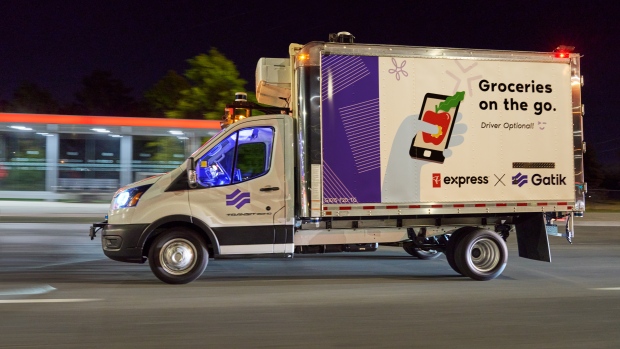 In August 2021, the company began operating fully driverless trucks for Walmart at their headquarters in Arkansas.

Narang says, “Gatik is the only autonomous trucking company worldwide to be doing commercial deliveries on a daily basis without anyone behind the steering wheel.”

In 2019, Gatik came to Canada looking for talent in robotics and engineering, and opened an office in Toronto. Narang explains, “Part of the reason was talent. The other one was that the immigration policies that Canada had were very favourable, especially for the high-skilled talent that we were looking to hire. Over time, we added customers and operations for the Toronto market as well.”

Today, around 40 per cent of Gatik’s total staff of about a hundred employees are in Canada, and the company expects to expand this number to 225 by 2025. The size of its fleet will grow from five operational trucks and five test vehicles in Ontario, to nearly a hundred in Canada, and around 300 across all of North America by the end of 2023.

With plans to focus on growth and scale over the next 12-18 months, Gatik is also looking to add more Canadian customers, mostly in the GTA.

“The way we go about our commercial operations is densifying each of our customer sites,” Narang said.  “So for example, in the GTA, the preference is always to add more customers so that we can have a much larger fleet and densify that particular site.”

One of the reasons for Narang’s confidence in Gatik’s ambitious growth plans is the growing demand he sees for its service, mainly due to a large shortage of drivers in the U.S. and Canada, and at a time when customers are demanding faster and cheaper deliveries.

“We are seeing crazy adoption on the commercial side for this kind of solution. Each of our customers wants more trucks on the road, that’s the main challenge for us,” Narang says.

“Gatik operates its vehicles on known routes with fixed pick-up and drop-off locations which, from a technology perspective, maximizes efficiency and offers the potential to scale rapidly,” a Loblaw spokesperson said.

At present, Gatik operates its trucks for Loblaw 12 hours a day, seven days a week.

Gatik’s autonomous driving software stack is developed in-house but it leases and customizes its total fleet of over 30 light- to medium-duty trucks from its partners like Ryder. Each truck is equipped with a dozen cameras, six radars and six lidars or light detection and ranging systems, all discreetly integrated into the vehicle’s body, to provide 360-degree coverage for a wide range of conditions.

It looks like a conventional truck from the inside and can also be driven manually, but the autonomous controls are backed up to ensure there’s no single point of failure. While the trucks are designed to drive themselves and take defensive or evasive action when required, there are remote supervisors monitoring each truck for any severe contingencies.

Before introducing driverless trucks on any route, Gatik works closely with various stakeholders such as state transport ministries, local police and fire departments and other emergency services to brief them about their technology and plans. Narang calls it an “anti-Uber approach where we tend not to surprise anyone.”

In Ontario, they have worked with the Ministry of Transportation since 2019; they have also worked with the municipalities in the Brampton and Peel areas, specifically the police, fire and emergency services departments.

Gatik has raised US$115 million in venture capital so far, including from Canadian investors. While the company has mapped out several markets for expansion, it plans to stay firmly in the middle-mile niche.

Narang said, “The whole commercialization and scale anywhere in the world will likely happen in the transportation of goods versus transportation of people, and within that the middle-mile is the one that makes sense from the commercial, technology and regulatory fronts.”

There are over 28,000 vacancies for truck drivers across Canada, according to Trucking HR Canada’s November report.

The Canadian Trucking Alliance (CTA), an advocacy group for the industry, has been raising the alarm over the long-running shortage of truckers, a problem it says worsened during the pandemic.

The gap is caused by several factors, including an aging workforce, escalating retirements, and a difficulty in attracting new, and younger drivers.

He notes, “There’s a higher barrier to entry to become a truck driver than many other occupations, such as mandatory, professional training, licensing and insurance.”

The steadily growing shortage of drivers has been felt acutely as cross-border trade with the U.S. has expanded rapidly over the past three decades. Beghetto says the industry has been trying to adapt to the expectations of younger workers, with some companies letting drivers choose their routes more often, providing benefits and making trucks more comfortable.

The industry has also lobbied Ottawa for using immigration to help ease some of the shortfall. Earlier this month, the federal government announced that transport truck driver would be one of the occupations added to the Express Entry program for aspiring immigrants.

However, the trucking industry does not view autonomous vehicles as a solution to the shortage of drivers.

Beghetto says, “The bottom line is a truck operator is needed to do so much more than handling the steering wheel. I don’t really expect to see driverless vehicles in freight or last-mile delivery in my lifetime.”