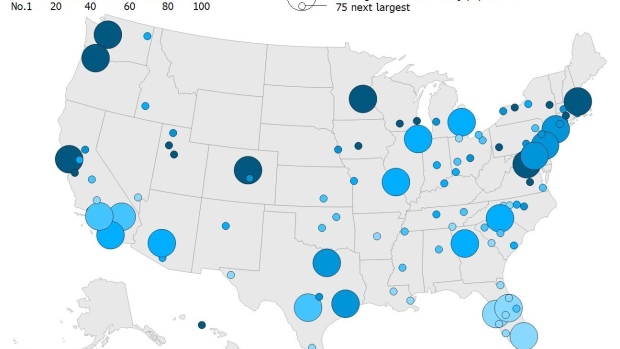 A person looks out at the city skyline while standing in Alamo Square in San Francisco, California, U.S., on Thursday, March 26, 2020. Governor Newsom on March 19 ordered that all of the state's 40 million residents go into home isolation while saying outdoor activity is permissible with proper social distancing. Several parks reported a surge in visitors over the weekend from people wanting to get out of the house. Photographer: David Paul Morris/Bloomberg , Bloomberg

(Bloomberg) -- In normal times, it would be hard to find obvious similarities between Worcester, Massachusetts; Madison, Wisconsin; and California’s Bay Area.

But after being ravaged by a pandemic that caused nationwide lockdowns, these regions are among those poised for a relatively strong recovery from the coronavirus recession, according to a Bloomberg analysis of the economic infrastructure and demographics of the 100 largest U.S. metropolitan areas.

The San Jose and San Francisco metro areas took the top two spots in the ranking. Known for their information technology, electronics manufacturing, venture-capital funding and research universities, the economies in the Bay Area boast industries that have benefited from the pandemic: think Zoom Video Communications Inc., Netflix Inc. and Instacart Inc.

Diverse urban economies got higher marks in the Bloomberg gauge, especially ones that don’t rely mainly on leisure and hospitality or on small businesses, both of which bore the brunt of the downturn. Metro areas with strong human capital -- a highly educated labor force -- and lower consumer debt also scored higher.

Other criteria included each area’s share of vulnerable demographics, such as people who are older, without health coverage, living in group homes or low-income households, as well as those with pre-existing health conditions. As the country continues to coexist with Covid-19, regional medical resources can be further strained.

The New York-Newark-New Jersey metro area ranked 33rd; New York has had the highest number of confirmed cases and deaths in the U.S.

From a health perspective, many tech workers easily pivoted to working from home, which allowed these companies to close their offices earlier than most and help prevent virus spread. Even so, many service workers in the Bay Area have lost their jobs, adding to a pre-existing income gap in the region.

“We’re high-performing, and you throw a pandemic at us and we still perform,” said Russell Hancock, chief executive officer of Joint Venture Silicon Valley, a nonprofit that analyzes the region’s economy. “What’s weak is companies of place: gardeners and barbers and house cleaners and restaurants -- their livelihood has been decimated.”

On the East Coast, the Boston and Worcester regions took two of the top 10 spots in the ranking. Both areas are known for education and a strong health-care sector. Together, they are home to about 40 colleges and universities and more than 20 hospitals, along with many of the world’s leading biotech companies.

Since demand for health care and education typically are inelastic, these sectors aren’t as vulnerable to recession, said Peter Dunn, chief development officer for the city of Worcester. Also, college students account for about 20% of Worcester’s population, he added, meaning that people in the area tend to be younger and not as susceptible to Covid-19.

Taking the fourth spot in the ranking was Madison, Wisconsin, home to hospital-software giant Epic Systems Corp. as well as strong information-technology and video-gaming companies -- all resilient through the pandemic, according to Paul Jadin, president of the Madison Region Economic Partnership.

Areas that depend on tourism clustered at the bottom of the list: Baton Rouge, Louisiana; Miami, Florida and Las Vegas, Nevada. The ages of their populations also skew higher, adding to the risk of coronavirus spread.

While Las Vegas casinos and Florida beaches have started to reopen, signaling the beginnings of economic recovery, the regions also have seen spikes in virus cases. Florida and Nevada each had their highest number of confirmed cases in the past week, according to data from Johns Hopkins University.

Regardless of their economies and health, the long-run rebound in individual metros will depend on the U.S. as a whole because so much regional success comes from business travel and national consumer sentiment, Jadin said.

“If the country comes back strong, Madison will be among 10 or 20 regions that lead it,” Jadin said. “I’m nervous about the national recovery.”

The ranking is based on the assumption that Covid-19 is controlled enough to fully open cities across the U.S. Protests for racial justice -- along with pandemic-induced local budget crises, neither of which can be easily standardized to include in the calculations -- may complicate the comeback path.

“I would target health-research spending ruthlessly with no objective other than cracking this pandemic,” Harvard Urban Economist and Bloomberg View columnist Edward Glaeser said in an email. “In the teeth of this plague, we need to focus on ending the disease and the related economic suffering.”