Ontario Premier Doug Ford has fired back at the cannabis industry after some leading executives complained that the lack of legal pot stores in the country’s most populous province resulted in weaker-than-expected sales within the first year of legalization.

In an interview on BNN Bloomberg Thursday, Ford said that pot producers didn’t have enough supply for Canadian retailers when recreational cannabis was legalized in Oct. 2018, which resulted in the province taking a more cautious approach to licensing marijuana stores.

“Maybe I’ll shoot back a little bit. They didn’t have the supply ready,” Ford said. “We’re doing it responsibly. We’re going to roll out the market and keep in mind it’s only been a little over a year and a bit and we’re opening up to the market.”

Ford said Ontario will soon have more cannabis stores open than the entire country combined, although he didn’t provide specifics on when that would take place. Ontario currently has 28 legal pot stores open, compared with 402 in Alberta.

A spokesperson from the Alcohol and Gaming Commission of Ontario, which regulates the licensing of cannabis stores, told BNN Bloomberg in an email it has received 600 applications for new pot shops licences, but said “many” of them had missing information, which would lead to processing delays. 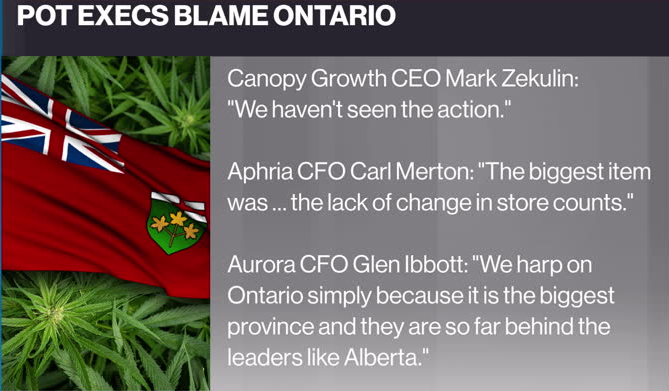 Several cannabis producer executives recently blamed Ontario for not having enough retail locations available for consumers to buy their products and resulted in those companies widely missing revenue expectations.

“We harp on Ontario simply because it is the biggest province and they are so far behind the leaders like Alberta,” said Glen Ibbott, chief financial officer at Aurora Cannabis Inc., during a conference call with analysts in November. Similar comments were made by Aphria Inc. and Canopy Growth Corp. executives.

Ford said he watches the evolution of the legal cannabis industry “on a daily basis” and is a strong believer in allowing the market to dictate how the industry evolves. He also said he wants to get rid of the illegal market and ensure that the industry can “prosper.”

“I know a lot of cannabis companies jumped into this with blindfolds on as far as I’m concerned and now they’re coming to reality,” Ford said. “By no means can you point a finger at one province. We encourage them and hopefully they’ll be able to fulfil their requirements.”