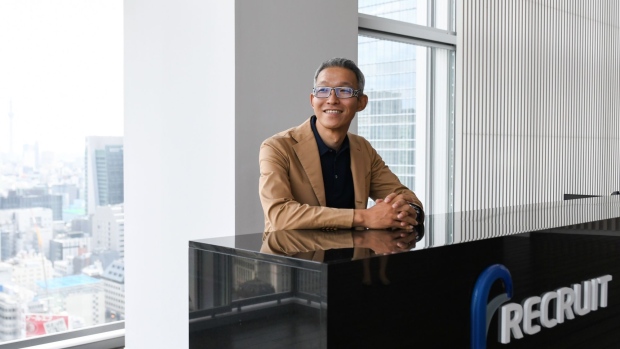 Hisayuki Idekoba, president and chief executive officer of Recruit Holdings Co., at the company's office in Tokyo, Japan, on Tuesday, June 22, 2021. Japanese staffing and internet firm Recruit, the country's fifth-biggest company, was well positioned for the work-from-home shift and transition to a post-Covid future, according to Idekoba, 46, who became the youngest CEO in the Nikkei 225 Index when he took over in April. , Bloomberg

“They’re just numbers,” Idekoba said in an interview after the company reported record adjusted profit of 512 billion yen ($4 billion) and a 27% rise in revenue in the fiscal year ended March. “It vexes me that we still haven’t been able to come close to our goal of simplifying hiring.”

Although relatively unknown outside its home market, Recruit is the company behind Indeed.com, as well as Glassdoor, the salary and employer-review website. It’s also Japan’s ninth-biggest company, with a sprawling empire across online travel booking, real-estate listings, payments and other consumer sites — akin to having Booking.com, Zillow, Square and LinkedIn all under a single umbrella.

Idekoba, who persuaded his bosses to buy Indeed as a startup a decade ago and then spent most of the subsequent years in Austin, Texas, growing the business, is convinced that online hiring can evolve to the point where job seekers can find employment by pushing a single button. It ultimately comes down to getting more data.

“We still need to improve the product,” said Idekoba, who describes the development of online hiring as lagging the web-travel market by a decade and has even gone as far as saying resumes should be eliminated altogether in favor of more advanced tools to match employers and workers. “We need to know our users much better,” he said.

The pandemic has spurred unprecedented ructions in the global labor market, with US employers raising wages, offering more flexibility and boosting perks to fill positions. Idekoba has previously urged companies to modernize their hiring processes, proposing questions and assessment tests -- the results of which can be stored and used by job seekers for future applications -- as a better gauge of whether someone can navigate requirements.

The Great Resignation has been a boon for the company’s bottom line, with revenue in Recruit’s high-margin job-portals business almost doubling to $7.7 billion in the latest year with a margin of 38% for adjusted earnings before interest, taxation, depreciation and amortization. By comparison, Recruit’s other two divisions, staffing and online consumer services, have margins below 20%, even though they make up almost 80% of sales.

Even as profit climbs, Recruit’s embrace of human-resources technology has made it much more of a tech company, and exposed to the sector’s corresponding gyrations in stock prices. After climbing 61% in 2021, Recruit has lost about about a third of its value this year.

Asked whether it would make more sense to split Recruit by carving out the consumer businesses, Idekoba declined to comment. Instead, he spoke about the need to offer more sophisticated matching tools, which applies just as much to travelers, home buyers and online shoppers, as they do for job seekers.

One of Japan’s most infamous companies, Recruit’s founder was at the center of a shares-for-favors scandal that brought down a prime minister more than three decades ago. After years of rebuilding the business, Idekoba’s predecessor took the company public in 2014 in part to raise cash and issue public stock that could be used for big acquisitions.

But apart from the $1.2 billion purchase of Glassdoor in 2018, Recruit hasn’t done any major deals despite having $5.5 billion in cash and equivalents at the end of March. While there are targets in mind, Idekoba says that it’s always better to start with partnerships to get a better sense of whether a merger or acquisition would be mutually beneficial. He’s made his mark so far mark by launching and growing new enterprises within the company.