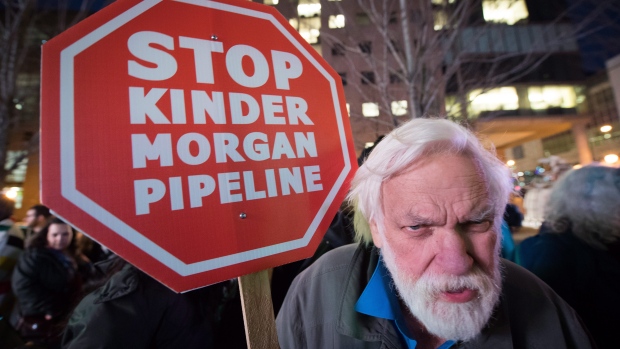 Paul George holds a sign during a protest against the Kinder Morgan Trans Mountain Pipeline expansion project, in Vancouver, B.C., on Tuesday November 29, 2016. Prime Minister Justin Trudeau approved the $6.8-billion project that will nearly triple the capacity of the pipeline that carries crude oil from near Edmonton to the Vancouver area to be loaded on tankers and shipped overseas. , The Canadian Press/Darryl Dyck

Vancouver Mayor Gregor Robertson said he was "profoundly disappointed," calling the decision a "big step backwards" for Canada's environment and economy.
"I -- along with the tens of thousands of residents, local First Nations, and other Metro Vancouver cities who told the federal government a resounding 'no' to this project -- will keep speaking out against this pipeline expansion that doesn't make sense for our economic or environmental future."

The $6.8-billion project would triple the capacity of the Trans Mountain pipeline, from 300,000 to 890,000 barrels a day, and would add 980 kilometres of new pipe along the route from near Edmonton to Burnaby, B.C.

It would also increase the number of tankers leaving Vancouver-area waters seven-fold, from five to 34 per month, prompting fierce opposition from local mayors and First Nations who say any risk of a diluted-bitumen spill is unacceptable.

WEIGH IN: What’s the most likely outcome for the Trans Mountain expansion project? https://t.co/L6f9D30NS4

Prime Minister Justin Trudeau announced the project would be approved with 157 conditions at a news conference Tuesday. He said he expects the decision to be "bitterly disputed" by a number of people across the country, but said the project is in Canada's best interests.

"If I thought this project was unsafe for the B.C. coast, I would reject it," he said.

Clark was unavailable for comment Tuesday, but her Environment Minister Mary Polak said the province will continue to work to ensure each of its conditions are met.

"Because we have taken that clear and principled approach to stand up for our province, we have seen the proponent and the federal government take actions, including Ottawa's recent Ocean Protection Plan," she said in a statement. 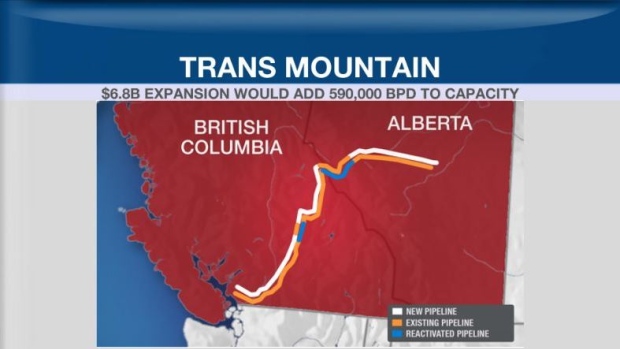 North Vancouver's Tsleil-Waututh Nation and the City of Vancouver already have legal challenges before the courts. The actions were filed in May after the National Energy Board recommended the federal government approve the project.

Delegates from the Tsleil-Waututh Nation travelled to Ottawa on Monday to urge Natural Resources Minister Jim Carr to reject the project.

On Tuesday, Tsleil-Waututh spokeswoman Charlene Aleck accused Trudeau of breaking his promise of a "renewed, nation-to-nation relationship with indigenous peoples."

"They are making a big mistake. We will not allow this pipeline to be built," she said.

Carleen Thomas, a member of the Tsleil-Waututh, spoke Tuesday night at a rally against the government's decision in Vancouver.

Hundreds of people gathered for the rally, carrying signs with messages like "Stop Kinder Morgan" and "Leave Fossil Fuels in the Ground."

Bob Chamberlin, vice-president of the Union of B.C. Indian Chiefs said the last-minute event was just the first action against the government's decision.

He expects to see more court challenges, protests and civil disobedience, and told the crowd he looks forward to getting arrested alongside them.

The move will hurt the Liberals at the ballot box come next election, too, Chamberlin said.

"Everybody's going to remember all of the hollow rhetoric and the promises that they made. And they forgot to say that they're just kidding," he said.

The business community in B.C. was pleased. Ian Black, president and CEO of the Greater Vancouver Board of Trade, said the project will generate more than $1-billion in construction spending and create thousands of high-paying jobs.

Kinder Morgan Canada called the approval a "landmark decision that affirms both the strength of the project and the rigour of the review process it has undergone."

Trudeau also announced Tuesday that his government has rejected the Enbridge Northern Gateway pipeline and imposed a moratorium on crude oil tankers on B.C.'s north coast. The news was met with celebration from those First Nations opposed and environmental groups.

The Gitga'at First Nation said the decision ends a struggle that pitted the Gitga'at and their allies against Enbridge in a "David vs. Goliath battle."