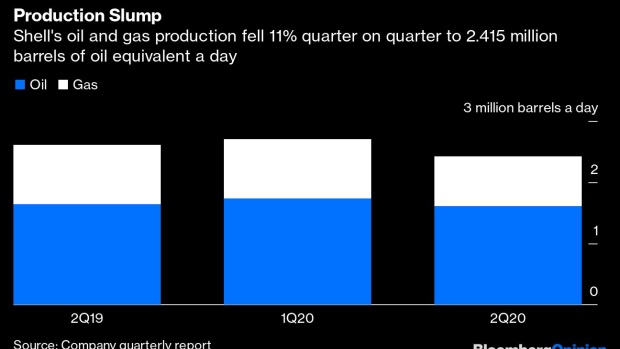 (Bloomberg Opinion) -- Trading saved European Big Oil from the full impact of this year’s oil crisis. It’s not the first time that massive profits from in-house trading desks ameliorated poor operating results from the core business of finding and producing hydrocarbons — and it won’t be the last. But the companies may struggle to carry this safety net into the era of decarbonization.

As my Bloomberg Opinion colleague Chris Hughes wrote this week, Royal Dutch Shell Plc proved it could make a profit even amid the carnage of the oil market in the April-June quarter. The slump in oil and gas production — down 7% year on year and 11% quarter on quarter — and collapse in prices was offset by aggressive cost and capital-expenditure reductions, plus a “very strong” trading result.

The company’s American peers, Exxon Mobil Corp. and Chevron Corp., largely avoid pure trading, sticking instead to marketing their own production. That deprived them of the safety net enjoyed by Shell and Italy’s Eni SpA (and presumably also BP Plc, which reports earnings on Tuesday).

It showed in their second-quarter results. On Friday Chevron reported its worst quarterly loss in at least three decades and warned that the global Covid-19 pandemic may continue to drag on earnings. With the recovery in oil demand running out of steam, that’s not a big surprise. Exxon followed hard on its heels with its biggest-ever loss, as the collapse in crude prices hit upstream earnings, while the slump in demand hit its refining and chemical businesses. Exxon was probably glad to not have a big trading operation, as it managed to lose money there too.

As Bloomberg News’s Javier Blas explains here, Shell profited from the sharp drop in the price of crude for prompt delivery relative to that for future supplies, allowing it to lock in a profit by buying and storing oil, while selling forward in the derivatives market. With low borrowing costs and plentiful cheap storage capacity throughout its supply chain, the company enjoyed advantages over the independent trading companies.

But the gap in prices has narrowed since the end of April. Now the profit that can be locked in, less than $2 a barrel, probably won’t even cover Shell’s storage and financing costs.

Will the gap widen again? Almost certainly, at some point. Will it get as wide as it was at the end of March or late April? Maybe not, as that was the widest it’s been in the data going back to October 2007. The last big blow-out was during the great oil disruption in January 2009, which was triggered by the financial crisis.

Of course, trading profits don’t just rely on extreme and rare events. They have made significant contributions to the incomes of European oil majors in what might be termed “more normal” times too. And that raises a longer-term question for these companies as they become less reliant on oil.

Although oil trading is well established, with a vast array of derivative contracts that can be utilized to generate profits, trading in natural gas is much less mature and may never develop in the same way as oil markets. Despite the growing volume of gas transported around the world in super-chilled liquid form, most supplies are still delivered through pipelines that tie buyers and sellers into long-term relationships and multi-year contracts. Trading instruments in electricity and renewable energy sources are even less well developed.

Over the past decade, the “oil” companies, whose profits were mostly derived from pumping crude out of the oil fields they discovered, transformed themselves into “oil and gas” companies. Now they are evolving once again to become “energy” companies. Shell’s latest report shows that almost half of its production was natural gas, compared with less than 40% in 2005.

The swing is likely to become even more pronounced. Companies like Shell aren’t going to stop producing oil, but it will become less important as the world increasingly embraces less carbon-intensive forms of energy. As they become more focused on natural gas, electricity and, very likely, hydrogen, their ability to offset any weaknesses in their core activities through trading profits are likely to be severely curtailed.