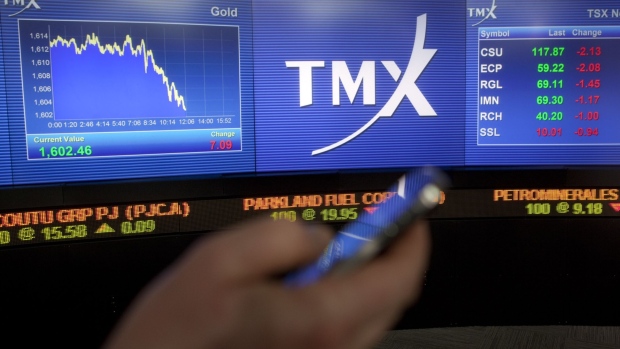 An employee checks a BlackBerry mobile device in this arranged photograph as TMX Group Inc. signage and stock prices are displayed on a screen in the broadcast center of the Toronto Stock Exchange (TSX) in Toronto, Ontario, Canada, on Tuesday, Feb. 19, 2013. Canadian stocks rose for the first time in four days, led by gains among banks, after a measure showing an increase in German investor confidence added to signs of a European economic recovery. , Photographer: Pawel Dwulit/Bloomberg

It’s been a busy year in the business world as Corporate Canada and investors alike reacted and adjusted to everything from supply chain disruptions, rampant inflation and a new COVID-19 variant. Take the following quiz to test your knowledge on the year that was in Canadian business.

1) Which Canadian stock was caught up in the so-called meme stock frenzy?
a. BlackBerry
b. Real Matters
c. Lightspeed Commerce
d. Bombardier

2) CI Financial has announced multiple acquisitions this year – in which region has the asset manager been expanding its footprint?
a. Europe
b. Asia
c. Canada
d. United States

4) How much did Canadians collectively owe in mortgage debt as of September, according to the latest Statistics Canada data available?
a. $1.5 trillion
b. $1.8 trillion
c. $2 trillion
d. $2.2 trillion

5) Which TSX subgroup is the best performer this year?
a. Energy
b. Real Estate
c. Info Tech
d. Financials

6) The Bank of Canada left its benchmark interest rate unchanged at its Dec. 8 meeting. What timeline did Governor Tiff Macklem give in his accompanying statement of when Canadians expect the first rate hike could be?
a. In January
b. In the middle quarters of next year
c. At the end of next year
d. In 2023

7) Which industry was the first to feel the impact of the global semiconductor shortage?
a. Auto industry
b. Financial industry
c. Tech industry
d. Construction industry

9) Air Canada abandoned its proposed $190M takeover of Transat AT this year. What was the main reason given by Air Canada for the deal collapse?
a. Renewed COVID-related uncertainty
b. Liquidity issues
c. European regulatory hurdles
d. Competing takeover bids

10) Which asset manager was the first to launch an actively-managed cryptocurrency exchange-traded fund in the Canadian market?
a. Fidelity
b. Purpose Investments
c. Horizons ETFs
d. Dynamic Funds

11) Rising oil prices have led to surges in cash flows for energy producers. Many, but not all, have decided to increase shareholder payouts. Which company out of the following four did NOT hike its dividend and/or announce a share buyback program?
a. Cenovus Energy
b. Suncor Energy
c. Canadian Natural Resources
d. Advantage Energy

12) Which one of these companies did NOT make a public market debut this year?
a. D2L
b. EllisDon Corp
c. Pet Valu Holdings Ltd
d. dentalcorp

13) Rogers Communications Inc. Chair Edward Rogers and his family ended up in a courtroom during a high-profile power struggle. Mr. Rogers ultimately replaced Joe Natale as chief executive with who?
a. Toni Staffieri
b. Alan Horn
c. Himself
d. Robert Dépatie

15) Cineplex was going to be sold to another company but the deal fell through. Cineplex is now locked in a legal battle with which theatre chain?
a. AMC Entertainment
b. Cinemark
c. Cineworld
d. IMAX

16) Canada's banking regulator, the Office of the Superintendent of Financial Institutions (OSFI) lifted its ban on dividend hikes and share buybacks on major Canadian banks and insurance companies in November. How many out of the Big Six banks subsequently deployed increased shareholder payouts?
a. Three
b. Four
c. Five
d. All six

17) The Canada Emergency Response Benefit provided income support for those whose jobs were impacted by COVID-19. When did this benefit end this year?
a. April
b. August
c. October
d. November

18) What factors have contributed to the surge in home prices across Canada?
a. High demand
b. Tight supply
c. Rising cost of building materials
d. All of the above

19) Canada's labour market has recouped all of the jobs lost during the pandemic and employment is now above February 2020 levels.
a. True
b. False

20) Beef producer Cargill Inc. and union workers reached a new labour agreement, averting a strike at the company's High River, Alta. plant. That plant produces how much of Canada's beef supply?
a. 10%
b. 20%
c. 40%
d. 65%