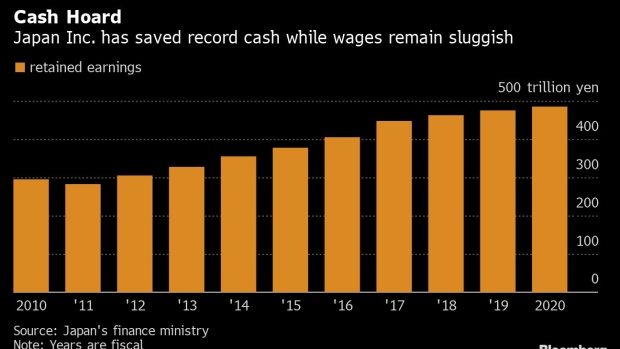 Residents wait in line at a walk-in Covid-19 vaccination site, targeting people in the 16-39 age group, in the Shibuya district of Tokyo, Japan, on Friday Aug. 27, 2021. Although Covid deaths have remained low in Japan, reflecting its success in vaccinating nearly 90% of the elderly, the number of patients in a serious condition has continued to rise each day for the past two weeks with little medical capacity to treat them. , Bloomberg

(Bloomberg) -- For the winner of a party leadership vote this week to pick Japan’s third pandemic-era prime minister, a heavy lift awaits on the economy.

Getting the country past the virus will be job No. 1, requiring a rethink of restrictions on bars and restaurants and more stimulus to woo voters before national elections this fall.

Then comes the harder part: boosting innovation and tackling other long-simmering problems that have eroded Japan’s prosperity and made it the slowest growing nation in the Group of Seven.

There was a time when most Japanese people could reasonably feel they belonged to “a middle class 100 million strong,” as a popular saying went. Those days are long gone.

Although it’s true that Japanese businesses didn’t make massive staff reductions during the pandemic, as happened elsewhere, decades of corporate cost cutting have created a ballooning underclass of temporary employees. Some 40% of Japan’s workforce now has part-time or contract jobs that pay on average a third less than what full-timers make.

The government needs to find ways to get companies to save less and pay people more.

Former Prime Minister Shinzo Abe, Japan’s first leader during the pandemic, spent years browbeating executives to raise wages, to little avail. Persuading businesses to stop hoarding cash will be even harder now that the pandemic has added another fear factor.

Another way to boost growth is to innovate, but Japan has lost competitiveness in key areas. It still has more semiconductor factories than any other nation, for example, but few remain on the cutting edge. Meanwhile, Japan is making fewer significant scientific discoveries and, although it’s the third-biggest economy, it’s produced fewer major start-ups than Hong Kong.

To try to fuel productivity, outgoing premier Yoshihide Suga this month opened a new digital agency to revamp the government’s creaky computer systems and wean the country from the paper documents and personal seals still used for most official business. He also launched a $90 billion endowment to fund advanced research and set an ambitious climate goal of making Japan carbon-neutral by mid-century.

Those are good starts, but to raise Japan’s flagging growth potential, Suga’s successor will need to keep the investments coming.

The government doesn’t have much money left over, though, after it’s done paying for its debt and supporting the growing ranks of Japan’s elderly. Interest payments, health care and social security take up more than half the budget.

A doubling of the sales tax since 2014 has raised revenue, which increased even during the pandemic, but the government still doesn’t project being able to balance the budget anytime this decade. Pandemic borrowing of more than $720 billion so far has only made matters worse.

There’s little risk of a crisis as long as the Bank of Japan keeps buying most of the country’s bonds. Yet, without inflation to lighten the load, government debt totaling more than 250% of gross domestic product handcuffs policy makers.

The leader in public opinion polls to win the premiership, vaccine czar Taro Kono, says he supports more emergency spending to help the recovery, but he’s sounded more cautious about adding to Japan’s debt than his rivals.

“Social security reform on both the tax and spending sides will be the biggest challenge ahead. Social security spending has more than tripled since 1990. That’s the hard reality of an aging society. But, unlike policies to address climate-change or digitization there are no dreams here, just hard choices.”

Nearly one out of three Japanese are over the age of 65, the highest proportion in the world. Last year the country recorded the fewest births since it started keeping track in 1899.

A graying population that’s shrunk by about 2 million people in the last decade or so means a vexing mix of labor shortages, slower growth and rising health care costs.

To try to boost the birth rate, all four candidates in Wednesday’s ruling party election say they’ll double the government’s spending on children’s welfare. But a basic fact remains: Japan’s long working hours make it hard to raise kids, especially now that most families need two incomes to get by.

Japan was starting to issue more short-term visas to foreign guest workers before the pandemic, but the numbers were relatively small. Meanwhile, immigration remains difficult, even though so many of Japan’s problems lead back to the country’s challenging demographics.