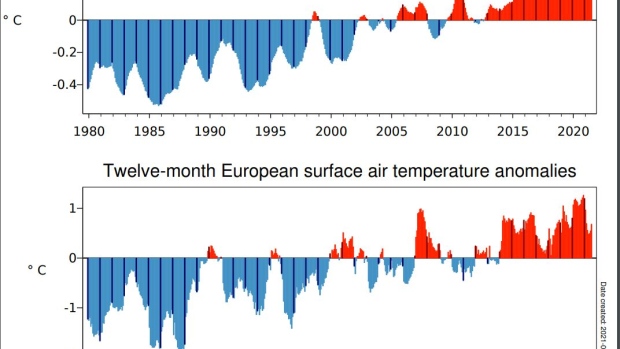 (Bloomberg) -- Near-record global temperatures last month gave a taste of the challenges the world’s economies will face in the years ahead as Earth creeps closer toward crossing a key warming threshold.

Raging forest fires, prolonged droughts and melting permafrost punctuated a July 2021 that was 1.4 degrees Celsius (2.5 degrees Fahrenheit) hotter than average in Europe and more than a degree warmer across much of the U.S., according to the latest report from the Copernicus Climate Change Service. The high temperatures unleash rare weather events while mounting pressure on farmers and utilities.

Read More About How the World’s Food Supplies Get Slammed by Drought, Floods and Frost

Average global temperatures are now 1.1 degrees Celsius higher than they were before the industrial era and less than a half a degree below a key threshold that climate scientists warn will amplify the superstorms, famines and droughts expected on a hotter planet.

“July is usually the warmest month of the year globally,” according to Copernicus. “July 2021 was warmer globally than any previous month in the data record other than July 2019 and July 2016.

Siberia and the Arctic were among the regions most severely impacted. Temperatures last month in several towns in the north of the Nordic peninsula reached  record highs over the weekend, according to local meteorological agencies. At the same time, Copernicus monitoring equipment detected unusual smoke and heat intensity from blazes in eastern  Russia, the western U.S. and British Columbia

The Copernicus model combines data from scientists in the U.K., France, Germany, Italy and the U.S. The EU program uses billions of measurements from satellites, ships, aircraft and weather stations around the world for its monthly and seasonal forecasts.

Global air temperature anomalies continued a two-decade trend of rising to new highs. The number of extremely hot days is increasing in many places worldwide. A study published last month suggested that global warming may kill  83 million people by 2100 from heat stress alone.