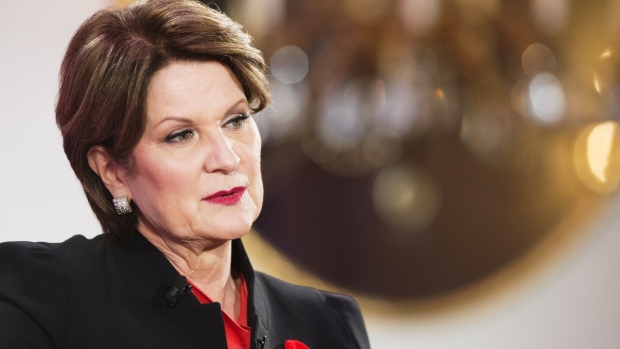 Marillyn Hewson, president and chief executive officer of Lockheed Martin Corp., speaks during Fortune's Most Powerful Women International Summit in Montreal, Quebec, Canada, on Monday, Nov. 5, 2018. The summit addresses the potential of women in advancing global economic growth and how women business leaders can use their power and their platforms for good. Photographer: Christinne Muschi/Bloomberg , Bloomberg

(Bloomberg) -- It’s not a popularity contest; you can make a standout chief executive and still face widespread criticism. Facebook Inc.’s Mark Zuckerberg and Alphabet Inc.’s Larry Page, for example, made the annual list of top 30 CEOs compiled by Barron’s.

Some of the leaders with top track records of revenue growth, earnings and shareholder returns are new this year. About a third of the names typically rotate and the rest -- think Jeff Bezos, Warren Buffett, Jamie Dimon, Larry Fink, Bob Iger and Satya Nadella -- come back year after year.

Female newcomers include Mary Dillon of Ulta Beauty Inc., praised for leading the cosmetic chain to nearly double the S&P 500’s yearly return since taking over in 2013; Marillyn Hewson of Lockheed Martin Corp. for what was termed her savvy direction; and Lisa Su of Advanced Micro Devices Inc. for giving Intel Corp. a run for its money.

More fresh faces making the roster were Bank of America Corp.’s Brian Moynihan for turning a loss-maker into the second most profitable bank behind JPMorgan Chase & Co., and Costco Wholesale Corp.’s Craig Jelinek for expert merchandising and raising minimum pay for workers.

Steve Easterbrook was cited for speeding up drive-through service at McDonald’s Corp. while also ramping up same-store sales and the stock price. Stephen Schwarzman, who founded Blackstone Group LP in 1985, was also new to the list as profits keep piling up for the private equity giant.

CEOs to fall off the list this year include: