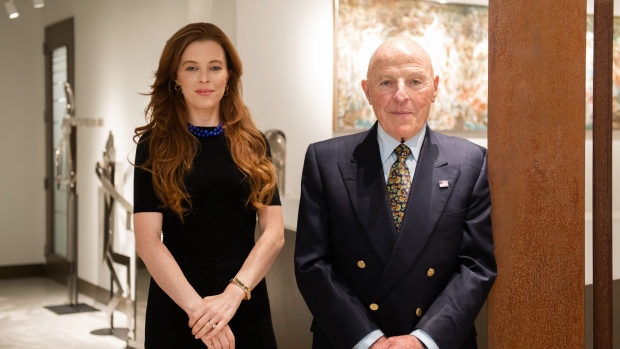 He’s an 82-year-old Trump supporter in liberal Seattle. She’s 32 and styles herself an environmentalist. He’s a blunt-spoken legend in the local real estate scene. She’s eager to put her stamp on the family business she’ll likely take over.

They’re the Seligs — Martin and Jordan — and on a rainy August morning, the two are sitting in purple velvet chairs around a black marble conference table in their downtown Seattle office, surrounded by glossy posters of the half-dozen developments they’re planning or already building.

One has Jordan’s fingerprints all over it. It’s a giant glass box steps from Amazon.com Inc. headquarters that will be the greenest office building of its size in the world. The 15-story tower collects rainwater for flushing and irrigation, has large windows to maximize natural light and comes with $1 million of solar panels to generate more energy than it consumes.

The Seligs are breaking ground on the project this month. But Martin makes clear it’s not something he would have considered himself.

“There’s no way in hell that I would do a building like” that, he said, explaining that the environmentally friendly design will make construction 10 per cent more expensive per square foot. Jordan sees it more as an obligation: “How could I not be interested in the environment?”

This type of generational divide is typical across the U.S., where millennials are far more likely to support efforts to combat climate change and find a way to make money from it. But in Seattle, it’s taking on added significance, as the father-daughter team embarks on an ambitious real estate play in one of America’s fastest growing big cities.

The Seligs are banking on more than green cred to fill their new buildings. They also have a 36-story tower that’ll house WeWork and its co-living offshoot WeLive; a modern remake of a historic Federal Reserve building; an office-and-retail complex close to where the city’s National Hockey League expansion team will play; and a pair of developments on the city’s waterfront, which is getting a US$724 million makeover.

The older Selig is quick to wave off any suggestion that there’s much of a strategy behind the building binge other than his confidence in Seattle’s economy. But, if it works out, it stands to bolster his $1.1 billion fortune and further alter the skyline he’s spent the last six decades helping create. He’s also reluctant to talk much about retiring.

Martin recently completed a seven-year process drafting his trust and estate plan. If Jordan doesn’t end up taking over, Martin has set up a company to make sure the business continues operating in his absence.

“You’ve got to protect yourself both ways,” he said. Jordan said she hopes to take her father’s role when he retires.

While the city has better known billionaires, like Bill Gates and Jeff Bezos, the Selig family has been a fixture of Seattle’s business scene for decades. Martin and his parents fled Nazi Germany, traveling east through Russia, Korea and Japan, before boarding a boat they thought was headed for San Francisco. On the way, it docked in Seattle. It was a sun splashed day in in October 1940, with Mount Rainier looming in the distance. They decided to stay.

After spending time working in his family’s children’s clothing business, Martin ventured into real estate, putting up shopping centers in the early 1960s. He eventually branched out into office buildings and made a name for himself as a daring developer.

“He’s a master opportunist,” said Jack McCullough, a local real estate lawyer who has worked with the Seligs. “He does projects that others are unwilling or refuse to do.”

Such ambition has caused headaches for city planners, who thought it was almost impossible to build something as big as Selig did with Columbia Center in the early 1980s. The 76-story monolith is so huge that it prompted local lawmakers to limit the size of buildings downtown. One critic called it “a flat-out symbol of greed and egoism.” The black box is still the city’s tallest building and, even though he no longer owns it, a source of pride for the developer.

“We built as high as we could until the federal government stopped us,” Martin said, noting that a building any taller would have affected flights out of Seattle-Tacoma International Airport.

About a mile from her father’s magnum opus, Jordan is leading the development of 400 Westlake, the green building she hopes will have a similarly long-lasting impact on Seattle.

While Martin was reluctant, his daughter was able to make a business case for going green. As part of Seattle’s Living Building Pilot program — a plan that Jordan helped draft — the structure will be two stories bigger than would have been permitted otherwise.

“We’re not just doing this out of the goodness of our hearts,” said Jordan, a Columbia University graduate. “We generally try to build the biggest building that we possibly can on any given site.”

It’s just one example of how she’s pushing her father to embrace change. The company is taking on a handful of residential projects now, and may expand into different types of developments in the future, Jordan said of her plans for the company should she take the helm. One of the new buildings is an apartment complex planned for the city’s waterfront on a site that Martin purchased in the 1980s.

“I see a lot of similarities between Jordan and her father,” said Miriam Wheeler, co-head of the real estate finance group in the Americas at Goldman Sachs Group Inc., which has lent the developers money. “But I think she’s also bringing fresh ideas to the company.”

While Jordan is the most-visible of Selig’s children at the firm, her older brother David also works there. Her sister Lauren left the business in 2012 and now produces films. That family involvement sets the company apart from other developers.

“You’re not doing deals with an institutional landlord,” said Matt Walters, a CBRE Group senior vice president who has represented some of the Seligs’ tenants. “You’re doing deals with a massive mom-and-pop operation.”

Martin and Jordan admit that working with family comes with pros and cons and there are inevitable disagreements, particularly when it comes to politics.

In a city where Donald Trump supporters are a distinct minority, Martin isn’t shy about backing the president. “He’s the best guy around,” said Martin, who donated $5,600 in April to Trump’s 2020 re-election campaign, as well as $50,000 to the Trump Victory joint fundraising committee.

Jordan, who has made political donations to Republicans and Democrats, said she doesn’t support Trump. She’d also rather not talk about the president. When the interview turned to politics, she tried to steer the conversation back to their new developments.

“While I appreciate my father’s willingness to talk about politics, I wouldn’t mind redirecting the conversation,” she said, after which Martin insisted, “Go ahead, ask me anything you want.”

Both said that his views haven’t affected their business. But it has drawn some unwanted attention. This year and last, protesters gathered outside the Seligs’ headquarters, which also houses a local office of Immigration and Customs Enforcement, to draw attention to family separations at the border. In one testy exchange, Martin asked demonstrators why they don’t “get a job.”

Other protesters have questioned how Selig, once a refugee himself, could provide space to an administration with such hard-line immigration policies.

“It’s a government lease” and they have a right to put in whatever agency they want, he said, waiving away the matter. “I don’t judge that.”

A bigger risk for the company undertaking so much development is the local economy. After years of heady growth, apartment developers in Seattle have started to pull back some, citing fears of a slowdown in the city’s job growth. The number of cranes dotting the skyline has recently decreased.

For now, however, the boom is continuing. Amazon recently announced that it has 30,000 unfilled positions nationally, with many of those in the Seattle area. Vacancies in office buildings remain low. And the population continues to increase, growing by more than 20% since 2010, creating more demand for homes and offices.