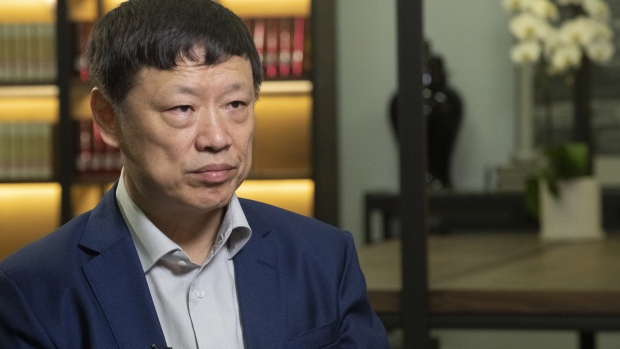 Investors anxious to know how China’s opaque government is prosecuting the trade war are paying close attention to an unlikely source: the editor of one of the country’s most combative state-run newspapers.

In recent weeks, Global Times Editor-in-Chief Hu Xijin has used his Twitter feed to accurately forecast several Chinese moves, from an investigation into FedEx Corp.’s failure to deliver packages from Huawei Technologies Co. to the government’s warning to students studying in the U.S. Markets have taken notice, sending Boeing Co. to its lowest close in four months after one tweet.

Yet Hu acknowledges that he occupies an ambiguous space in the Communist Party’s efforts to communicate its plans to the world.

“I have access to some information for the nature of my job, but I’m not authorized by anyone to release it,” Hu said in an interview with Bloomberg News in Beijing last week. “I’m not sure if Chinese officials are deliberately passing on information to me. The officials and I have a tacit understanding.”

Hu’s emergence as a key policy oracle for the world’s second-largest economy highlights the gulf between the communication strategies used by President Donald Trump and his Chinese counterpart, Xi Jinping. Whereas the U.S. leader revels in spontaneous communication via Twitter -- using the platform to announce his latest tariff gambit last month -- Xi promulgates his plans through bureaucrats, white papers and jargon-laden speeches. 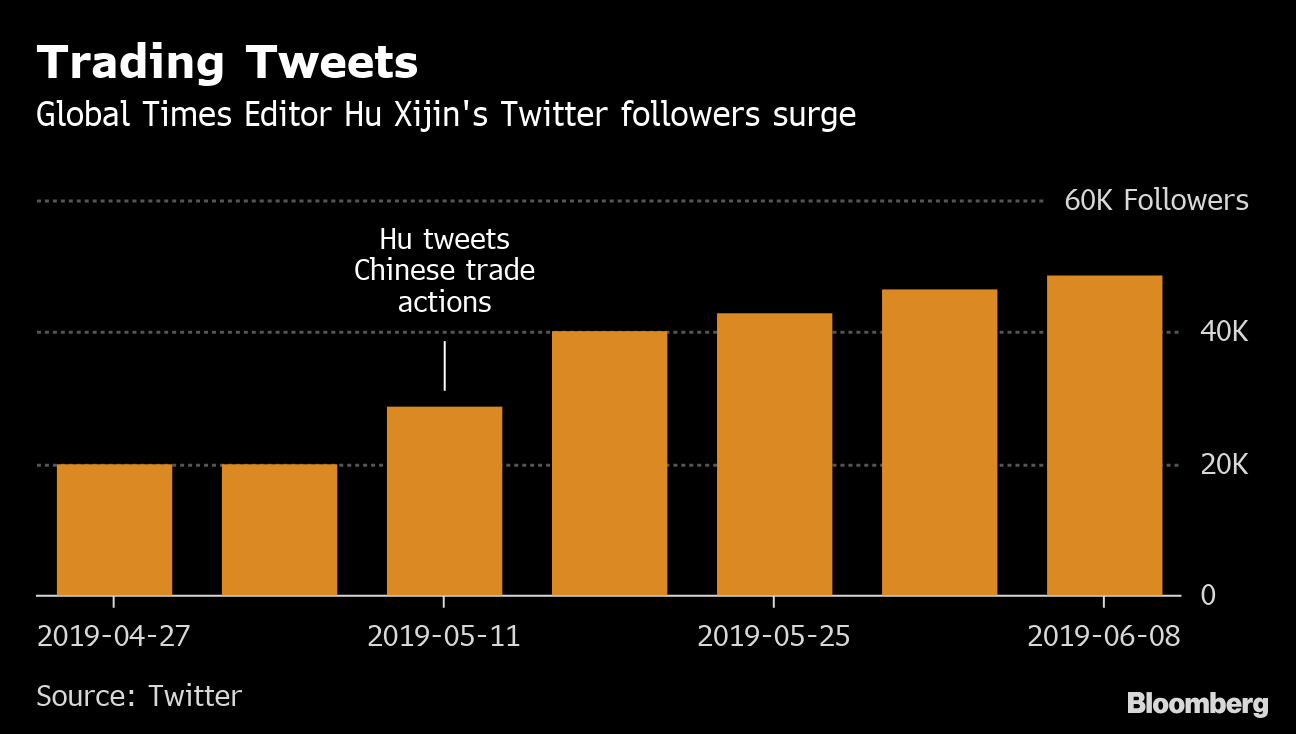 That’s boosted demand for someone like Hu, who’s among a handful of prominent Chinese figures who comment on topics usually handled with extreme sensitivity by state agencies and propaganda organs. Hu’s Twitter followers more than doubled to 48,400 over the past month as tensions escalated.

“A lot of fund managers and investors we know are watching Hu’s Twitter account closely, as it provides key information about China’s stance on the trade war and other issues,” McDonald said. “Hu’s Twitter is seen as China’s way to fight back. It is a negotiation tactic by the Chinese Communist Party.”

Hu’s Twitter feed echoes the tone of the Global Times, a nationalistic tabloid published by the party’s People’s Daily that serves up English-language articles and commentary to counter the Western-dominated narrative about China. He has run the paper since 2005 and joined Twitter in 2014, a time when propaganda outlets were accelerating their use of social media including U.S.-based sites blocked in China.

Also like the pages of the Global Times, Hu’s tweets are peppered with defenses of China’s human rights practices and boasts about the country’s rise. He took a similar line in discussions with Bloomberg last Wednesday, saying the country’s economy would continue to grow despite the trade war: “The loss is bearable for China. Time is on our side.”

But it’s been Hu’s predictions about specific Chinese countermeasures that have drawn the most interest, especially after Trump’s May 5 tweet accusing Beijing of trying “to renegotiate” and threatening a new round of tariffs. Later that week, Hu tweeted that the chances of a deal by Trump’s deadline were zero, citing someone “from the China side who knows the trade talks well.”

Then, after the last round of talks failed to avert the tariff hike, Hu began to share ominous hints about China’s next moves. On May 13 -- just as U.S. markets were about to reopen after the weekend -- he tweeted that China might stop purchasing American agricultural products and energy supplies, saying local academics were also “discussing the possibility of dumping” some of the country’s $1.12 trillion stockpile of U.S. treasuries.

In the interview Wednesday, Hu said China “may take some measures” against imports of U.S. services, a growth area for the American side, if Trump goes ahead and levies tariffs on all imports of Chinese goods. He also warned about “collateral damage” to companies such as Apple Inc. or Qualcomm Inc. if the trade conflict continues to escalate.

While some of Hu’s reports -- such as a May 11 tweet saying the two sides had agreed “to meet again in Beijing in the future” -- haven’t yet panned out, others have been quickly confirmed by official action. On June 3, he predicted that China would issue a warning about the risk of visa issues to its 360,000 students studying in the U.S. -- forecasting a statement issued hours later by the Education Ministry.

How closely Hu’s message conforms to the official point of view remains unclear, although he sometimes cites an “authoritative source” or people “close to the negotiations.” Hu suggested that he, like many in China’s heavily censored media environment, operates within boundaries that are defined largely by what you get away with.

“My background carries a certain amount of authority, but I also speak on issues that other state media keep quiet about,” Hu told Bloomberg. “I was appointed by the People’s Daily. The authorities have absolute control over me and can take me down easily.”

One detail to watch: Hu said tweets that are “based on what I know” are “definitely true.” He used that or similar phrases in his posts about FedEx, the student warnings and China’s move to create a blacklist of foreign companies.

China has distanced itself from Hu tweets when asked by reporters at the foreign ministry’s regular news briefings. “As a general rule, we do not respond to the opinions or comments of experts, scholars, media and think tanks,” ministry spokesman Geng Shuang said May 14 in response to a query about Hu’s Boeing tweet.

Chinese authorities likely view the editor as a useful conduit to an overseas audience, similar to English-language state media services such as the China Daily newspaper and the China Global Television Network. Tellingly, Hu doesn’t share his predictions of official action with his much bigger fan base of 19 million followers on the largely Chinese-language social media platform Weibo.

“Now, since people said my tweet has moved the market, I will be more cautious,” he said. “If my tweets create collateral damage and cause losses for U.S. investors, that’s not what I want. My biggest hope is to express things more freely.”

--With assistance from Zheping Huang