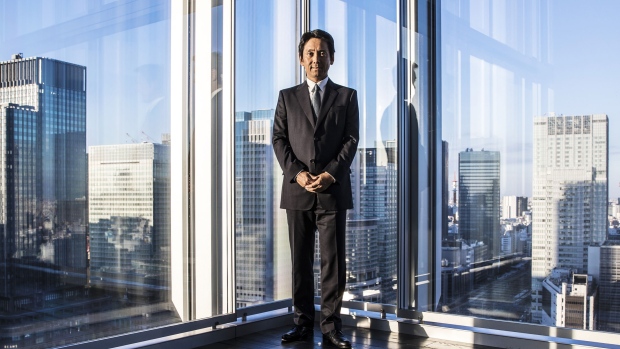 Desks and chairs are placed near the windows at Recruit Holdings Co. headquarters in Tokyo, Japan, on Feb. 14, 2019. Photographer: Shoko Takayasu/Bloomberg , Bloomberg

(Bloomberg) -- It was one of the most infamous companies in Japan, rocking the nation with a corporate scandal that ousted a prime minister and then nearly collapsing under a mountain of debt.

Now, Recruit Holdings Co. is back, reinvented by a group of employees who quietly turned the magazine publisher and job-placement firm into an internet giant that touches the lives of almost every consumer in the world’s third-biggest economy.

If Recruit were a U.S. company, it would be like having LinkedIn, Zillow, Yelp, eHarmony, Booking.com, Square and dozens of other apps — all under one roof.

“We are there, every time people choose to do things,” said Masumi Minegishi, Recruit’s 55-year-old chief executive officer.

As the biggest internet companies compete for world domination with apps that track consumers and use artificial intelligence to crunch data and provide tailored services, Recruit is Japan’s leading contender. With a value about a tenth of Alibaba Group Holding Ltd. and barely 5 percent of Amazon.com Inc., it’s up against giants. But Minegishi’s goal is to attract the most consumers in the world by 2030, and he’s betting that Recruit has the cash and experience to mount a serious challenge.

“Recruit was an internet pioneer, starting their first website in the same month that Yahoo launched in 1995” said Sandra Sucher, a Harvard Business School professor who published a case study on the company last year. “This is not their first rodeo — they know how to leverage new technology.”

Born more than half a century ago during Japan’s economic boom, Recruit found infamy in the 1980s when founder Hiromasa Ezoe concocted a shares-for-favors scheme to grease business deals and gain insider information. He gave more than 70 politicians and business leaders stock in a subsidiary that was about to go public, netting many of them a fortune.

When the bribes of “Recruit jiken,” or “The Recruit incident,” came to light, even cabinet ministers were implicated, forcing Prime Minister Noboru Takeshita to resign. Then, in the 1990s, Japan’s asset bubble burst and Ezoe’s speculative property bets saddled the firm with $14 billion in debt, leading to his resignation and the sale of a controlling stake to Daiei, a Japanese retailer.

The experience left Recruit in the hands of its employees just as the internet era was dawning and they soon began moving their job-recruitment services and publications onto the web.

Now, when the archipelago’s 124 million citizens look for a job, an apartment or a haircut, most tap into one of Recruit’s 200 websites and 350 apps. The company’s magazines, such as the “Jalan” travel guide, “Travail” for women seeking jobs and “Car Sensor,” a three-inch thick tome that used to be stacked waist-high in bookstores, are now all online.

That constellation of web portals, apps, and its job-placement business has given Recruit a valuation of about $46 billion, three times more than Yahoo Japan Corp. and four times that of Rakuten Inc., its nearest web and e-commerce rivals. Recruit went public five years ago, after paying off its massive debt and buying back some of its shares from Daiei.

“Like Alibaba and Tencent, Recruit has a very large home market to build and grow its multiplatform businesses, but it is far more focused in its mission and strategy,” Sucher said. Investors have backed Minegishi’s strategy, with its stock almost tripling since listing.

Instead of delivering search results like Google, or shipping merchandise like Amazon, Recruit acts as a go-between, matching businesses with customers and taking a cut or selling ads along the way.

Its restaurant-review site Hot Pepper is Japan’s No. 1 dining portal, and property website Suumo has the most real-estate listings. Many of its online booking services are linked to a tablet-payment network called AirRegi that gives the company valuable troves of data on shoppers.

“It feels radically different from any other Japanese company”

Using information generated by web traffic, reservations, payments and a loyalty-point network, Recruit can track consumer behavior in minute detail, and pass that knowledge on to businesses eager to attract and retain customers. “It not only benefits consumers with easier and faster payments, but also retailers,” said Taro Yamato, a researcher at Euromonitor International.

What differentiates the company is a culture that was forged from the failures in the 1990s.

“We had to take ownership to bring the business back,” Minegishi said.

In Recruit’s head office, spread over 19 floors of a building linked by footbridge to Tokyo station, few people wear suits and many dispense with the formal honorifics typically used between managers and subordinates in corporate Japan.

“It feels radically different from any other Japanese company,” said Howard Yu, professor at the IMD Business School in Lausanne, Switzerland, who also wrote a case study.

Recruit “empowers individuals,” says Minegishi, a departure from traditional education and employment in Japan with its focus on rote learning and respect for authority. New recruits and staff are often asked “Why are you here?” or “What do you think?” prompting them to challenge the status quo.

From being a national pariah, Recruit has developed an ethical base that gives it a competitive advantage, according to Harvard’s Sucher. “I honestly don’t know any other company that operates like Recruit,” she said.

That empowerment has generated some winners.

At one of Recruit’s annual internal startup competitions, a staffer named Fumihiro Yamaguchi proposed a web portal to help students study — a kind of Netflix for online learning in a nation notorious for cramming.

Today, Study Sapuri (Study Supplement) has more than 40,000 online courses. A graduate of Tokyo’s prestigious Keio University, Yamaguchi says he spent much of his own student years drinking in bars and paying other undergraduates to write his essays with the money he earned gambling in pachinko pinball parlors. Now, from fourth grade through college, nearly half a million students pay 980 yen a month each to access the site he created.

“He’s got fighting spirit,” Minegishi said of Yamaguchi. “You can’t just be strange. You have to be able to define the challenge, come up with the solution and then execute it.”

Recruit even discourages lifetime employment, for decades the backbone of Japanese industrial labor policy. Staff who’ve worked for the company for more than 6 1/2 years are eligible for an early retirement bonus, making it easier for them to seek work elsewhere.

That makes Recruit a rich fishing ground for companies looking to poach staff, and turnover is high — around 10 percent. In its first 54 years, only a few dozen employees reached retirement age. The average age is 35.

Recruit is “extremely well-managed,” but it operates in what are already mature industries and markets, said Shinnosuke Takeuchi, an analyst at Jefferies Group. “The biggest weakness — and opportunity — for Recruit is whether it can come up with a completely new business model that can challenge companies like Google and Amazon.”

To compete globally, the company must figure out ways to combine user information from all its apps, websites, payment platform and loyalty-points network, and develop algorithms that use the data to deliver new services, according to Chief Strategy Officer Shogo Ikeuchi.

That puts Recruit in direct competition with the big global players in one of the most expensive labor markets in the world, where annual salaries  can top $1 million: AI software engineers.

“Engineers are critically important,” Ikeuchi said. “They are vital for a business that’s built on matching services.”

And it still has a war chest of about $3 billion in cash.

The success of its app-based services has raised questions about the value of the company’s traditional media business. Recruit still publishes 54 magazines, and has an employment and staffing services division that accounts for a majority of sales. But the faster-growing media and internet divisions generate two-thirds of operating profit from just about 30 percent of total revenue.

Minegishi says he has no plans to split the enterprise. “We wouldn’t carve it up. We’re at the top in each category, so there’s no value lost.”

Still, Recruit may eventually have to shed some of its older, cash-generating businesses, according to Kenji Nonaka, senior partner at McKinsey & Co. in Tokyo. “It’s important to be willing to cannibalize your own business,” he said.

If that happened, the transformation of Recruit would be complete.

To contact the author of this story: Reed Stevenson in Tokyo at rstevenson15@bloomberg.net

To contact the editor responsible for this story: Robert Fenner at rfenner@bloomberg.net, Adam Majendie