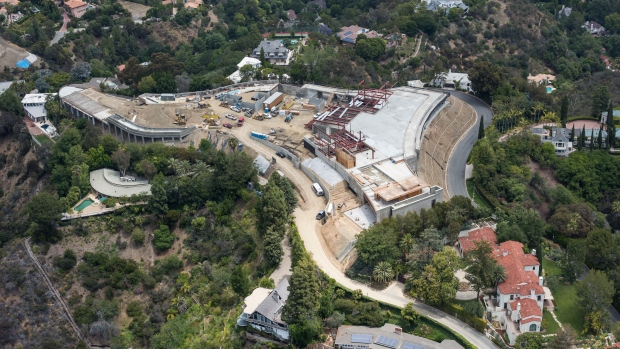 Construction at a home being built by Nile Niami, a film producer and speculative residential developer, in this aerial photograph taken in Bel Air, California, U.S., on Monday, May 18, 2015. , David Paul Morris/Bloomberg

America's priciest home is finally getting its finishing touches.

Seven years after he started working on “The One,” a 100,000-square-foot mansion in Bel-Air, movie producer turned developer Nile Niami says he's just about ready to test the market with his ballyhooed US$500 million asking price.

Replete with a nightclub, four swimming pools, bowling alley and 360-degree vistas of sun-dappled Southern California,  the symbol of America’s latest gilded age has generated a flood of media coverage since the proposed price was announced in 2015.

And while permitting problems, construction delays and financing issues have exposed the struggles of building luxury homes on speculation, and raised questions about whether the project high above Los Angeles would ever be finished, Niami says he’s almost done.  And he’s not backing off the lofty price tag, which would make the house the most expensive in America.

“When you have something that’s as rare as the Mona Lisa, you can command whatever you want for it,” Niami said in an interview, arguing that recent nine-figure property property deals in Los Angeles and elsewhere are proof that his pricing strategy was not just about generating press. “When the house was started, I had no basis to ask US$500 million— now there are so many triple-digit sales in L.A. and the world that the asking price is not unreasonable anymore.”

Niami admits the pressure of his development odyssey has aged him prematurely.  Building mega-mansions without a buyer lined up can be precarious. Cost overruns and delays are common, carrying costs are high, and shifting appetites for luxury are hard to predict. And while a project as eye-popping as The One grabs headlines, the amenities and specific design can ultimately narrow the pool of potential buyers, said appraiser Jonathan Miller, president of the real estate appraisal and consulting firm Miller Samuel Inc.

“The problem is, the more amenities you add, the more you personalize the property,’’ Miller said. “Even though the intention is to draw eyeballs to the property, you are also personalizing it, which may reduce the size of the market pie. It’s a very small, very tight market.”

Niami says that’s not a problem. Los Angeles has tried to limit  the construction of new mega-mansions, meaning nothing like The One can be built again, the developer said. And while one amenity that got a lot of attention — a room with tanks of live jellyfish lining the walls — has been dropped because it was too much work, Niami said he’s got something planned that’s  “even better.’’He hasn’t yet let anyone inside the property, but says the special features have helped draw interest from potential buyers. He’s talking to them now, but declined to provide details, citing privacy issues. The One’s unveiling will happen once the final interior decorating is done, Niami said.

“I’ve had potential buyers a long time on this,’’ Niami said. “We have a list of very real, verifiable buyers that we will bring in soon.”

Pricing homes above their market value, a strategy known as “aspirational pricing,” is a way for a developer to get attention for ultra-luxury listings.  A sale at the half-billion-dollar asking price would be more than double the biggest residential real estate deal in the U.S. to date -- a $238  million penthouse purchased by Citadel founder Ken Griffin in Manhattan. Niami points out that Griffin’s place is an apartment, with no land, while The One sits on 3 acres.

“The Billionaire,” another Bel-Air spec house that briefly was the most-expensive home for sale in America, was originally listed by developer Bruce Makowsky for $250 million. The 38,000-square-foot mansion, with wine cellars, pools, a bowling alley, helipad and “candy room,” sold for $94 million in October, a 62% price cut.

A Los Angeles native raised by a single mother who was  a special education teacher, Niami started out as a makeup artist in the move industry.  He eventually became a producer and his credits include “The Patriot,” starring Steven Seagal, and “Point Blank,” with Mickey Rourke. His turn to real estate came when he began remodeling condos.

Niami has two additional multimillion-dollar projects in Bel-Air. On a neighboring hillside, another of his properties, 10701 Bellagio Road, took three price cuts after being listed in 2018 for $65 million. A notice of intent to revoke permits on that property, and on another US$65 million Niami-owned mansion directly behind it, were issued by the Los Angeles Department of Building and Safety.

“When you have something as rare as the Mona Lisa, you can command whatever you want”

Without those permits, the properties can’t be legally occupied.  After several meetings, the issues are close to being resolved, according to a spokesman for the Los Angeles Department of Building and Safety. Still, the properties have been taken off the market, he said.

That leaves The One. Niami took out a two-year US$82.5 million loan from Hankey Capital, which specializes in high-interest bridge financing, to help finish the construction. He's current on the debt payments and faces an October deadline to repay the money, according to Hankey. Niami declined to comment on the rate of his loan.

While very few super-luxury homes sell each year, there was an uptick in 2019. Last year, 23 homes went for US$50 million or more in the U.S., the most since 2014, according to Miller. Six of those sold for at least US$100 million.“The One is absolutely no issue,” Niami said.  “The value is definitely there.”

--With assistance from Edvard Pettersson and Hailey Waller.