This gold explorer is on the hunt for Nevada’s next 10 Moz deposit - BNN Bloomberg
{{ currentBoardShortName }}
Markets
As of: {{timeStamp.date}}
{{timeStamp.time}} 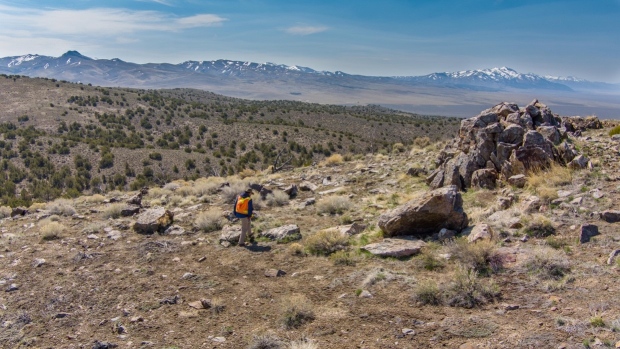 The Golden Trend property is sought after real estate. , Image courtesy of Market One Media Group

One of the last places in the world companies can find one without fear they will be taken away is in Nevada. Thanks to its Carlin and Cortez Trends—which are the state’s most significant gold belts—Nevada is one of the world’s most prolific gold districts and one of its safest.

No area in the world has such a saturation of large gold deposits, and they are all owned by Nevada Gold Mines. American Eagle believes Golden Trend has the potential to host the latest world-class deposit in along the Cortez Trend.

Next door to the 27-million-ounce Cortez Mine

NGM’s Cortez Mine adjacent to the Golden Trend property is a series of complementary mining operations located on the southeast portion of the Cortez Trend. Collectively, these mines comprise more than 50 Moz of gold reserves and resources and have produced more than 25 Moz of gold since 1996.

These multi-million-ounce mines run like a string of pearls along a trend that includes the Pipeline, Cortez Hills and Goldrush mines. Beginning with Pipeline and moving roughly from northwest to southeast, Cortez and Goldrush each got discovered 10 years after one another.

That’s what makes Golden Trend’s position just south of Goldrush so intriguing to American Eagle Gold. It’s the logical place to find the next pearl on the string.

American Eagle’s CEO, Anthony Moreau, notes, “given Golden Trend’s location, the project has been explored previously, but largely with wildcat holes with no front-end work. We’re doing that front-end work right now so we can target gold at depth similar to Goldrush.”

Ideal team for the job

Helping Moreau with this work is American Eagle’s recent addition of Mark Bradley as VP of Exploration.

Bradley has worked for majors within the Cortez Trend since 1992, and he led the team that made the big discovery at Goldrush. He comments, “I joined American Eagle because I’m very familiar with this part of the trend, and I see a chance to find a big deposit at depth here like we did at Goldrush. Golden Trend is the last property on this window that hasn’t been extensively drilled.”

Helping Bradley to vector in on the best targets for initial drilling at Golden Trend is Director, David Shaddrick, a 45-year mining veteran and the person who optioned the property to the company. Moreau says, “Between Mark’s experience finding a deposit along the Cortez and David’s intimate knowledge of the property, we have an ideal team in place to make a discovery here.”

American Eagle’s affiliation with the Oregroup enhances that technical advantage. This collection of mining companies allows each individual company to benefit from the efficiencies of shared back-office costs and the powerful industry and investor network that both Moreau and Chairman, Steven Stewart, bring to the table.

$AE is ecstatic to recently have had Mark Bradley join as our new VP of Exploration.

Mark led @BarrickGold's Cortez Project during its discovery, and also defined the success of their multi-million-ounce #Goldrush deposit.

Learn more about Mark and the company's initiatives 👇

“Our Oregroup affiliation helps us to look after shareholder money. We take a shared cost structure approach and have a culture that looks after every dollar we spend,” explains Moreau.

Bradley started his tenure at Golden Trend by looking at historic surface data. He’s in the process of digitizing that data as a prelude to doing rock chip sampling and running seismic lines on the project. While this work is underway, the company has applied for the needed permits to drill.

That work will set American Eagle up for its maiden drilling program on the project, an effort that will consist of three-to-four holes that will test Golden Trend down to 3,000 ft. That program is set to begin in September.

In the interim, Moreau plans to keep investors informed at every step in the assessment process, saying, “we want to keep people updated on our story, and that means keeping the news flowing and making investors feel like they’re part of the team.”

Assuming this drill program (and/or subsequent programs) hits gold at depth at Golden Trend, that has the potential to create a shareholder windfall. Moreau comments, “This is a significant company target with a big company geologist driving the exploration program.”

Given the project’s location near the southern end of the Cortez Trend, it seems like the logical place to look for the Cortez Trend’s next multi-million-ounce gold mine.

American Eagle Gold appears to have the team in place to give it the chance of making a discovery here, and with drills due to begin turning in September, investors won’t have to wait long to get a sense of Golden Trend’s potential.

With the company recently listing on the TSXV, they now have a clear plan to move forward along with enough cash on-hand to fund the first phase of their exploration program.

Follow American Eagle Gold on social media to get the most up-to-date news: