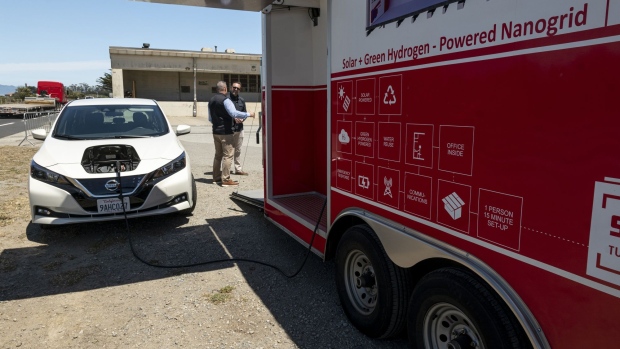 When a wildfire, hurricane or heat wave strikes and the power grid fails, portable diesel generators are often fired up to provide electricity. That, however, adds environmental insult to injury as the highly polluting devices contribute to atmospheric warming that drives climate-related disasters.

A demonstration of a solution to that conundrum recently rolled into San Francisco in the form of a 20-foot trailer that generates carbon-free electricity from onboard solar panels, battery packs and a fuel cell powered by green hydrogen. Called a Nanogrid by manufacturer Sesame Solar, the trailer can be towed – preferably by an electric pickup truck – to stricken communities to serve as a neighborhood power station, communications center or medical clinic.

“It’s the world's first mobile renewable-powered Nanogrid,” says Sesame Solar co-founder Lauren Flanagan, standing outside the red-and-white demo trailer parked within view of the Golden Gate Bridge. A nanogrid is a self-contained energy-generation system that usually serves a single location, such as a building, or in this case, a trailer.

David Mallory, a manager in the enforcement division of the California Air Resources Board, says a large spike in the use of diesel generators by residents and companies in recent years in response to more frequent blackouts “is a big concern.” Besides their climate impact, diesel generators emit particulate matter that can cause heart and lung disease.

He says the agency, which is the state’s principal climate regulator, encourages companies to adopt low-to-no emissions technology like Sesame Solar’s Nanogrid. “That's exactly the kind of thing that we're interested in,” says Mallory. “We think that this is an example of a good alternate technology that we hope will begin to be used in the future as opposed to diesel engines and other more emitting technologies.”

Sesame’s Nanogrids sell for between $100,000 and $300,00, depending on their size and power capacity. Flanagan says the company anticipates eventually offering Nanogrids as a service where trailers could be deployed as needed, for instance, during hurricane season.

The Nanogrid is not necessarily designed to keep the lights on in individual homes but to give corporations, relief agencies and governments the ability provide essential services after a disaster. Telecommunications companies have deployed Nanogrids to provide internet service during blackouts while a humanitarian organization used a Nanogrid as a mobile medical clinic after a 2017 hurricane struck the Caribbean country of Dominica. Over the past five years, Jackson, Michigan-based Sesame has sold nearly 60 Nanogrids. The US Air Force and Comcast Corp. are among the company’s customers.

The addition of green hydrogen to its newest model means the Nanogrid can operate fossil-fuel free continuously in a disaster area. Sesame says it has no known direct competitors that offer completely renewable mobile backup power.

A fuel cell supplies electricity to keep the batteries charged when the sun is not shining. The hydrogen that powers this trailer’s 4-kilowatt fuel cell is produced by an onboard electrolyzer that uses solar-generated electricity to split water molecules into hydrogen and oxygen. The system can store about 2 kilograms of compressed hydrogen gas and the trailer carries a seven-day supply of water for the electrolyzer.

“If there’s a wildfire and there’s a lot of smoke in the air, the solar is going to operate at lower efficiency,” says Flanagan, Sesame’s chief executive officer. “If you have a huge demand for power, you can just run off the green hydrogen fuel cell.”

The Nanogrid in San Francisco featured a Level 2 electric vehicle charger that was plugged into a Nissan Leaf. More intense and widespread wildfires in recent years have destroyed not just electrical infrastructure but gas stations and fuel depots. Flanagan pointed out that a Nanogrid hitched to an electric truck, such as a Ford F-150 Lightning, could keep the vehicle fully charged during relief operations, though towing a large load like a trailer would reduce its range.

The interior of this Nanogrid has been configured as an office with workstations, a whiteboard and a bathroom. The electrolyzer sits in a cabinet next to the water tank.

EnerSys, an industrial battery and energy storage technology company, has purchased Nanogrids from Sesame for deployment by its customers, including large telecoms.

“When something catastrophic comes through and takes all of the power down, both businesses and households are looking for connectivity,” says John Hewitt, vice president, broadband communications, at EnerSys.

“We've done ones for providing wireless access, as well as powering portable showers and toilets for first responders,” he adds.

Hewitt says he expects that the growing frequency of weather-related disasters as well as society’s dependence on high-speed internet access to drive sales of backup power systems like Nanogrids.

“Being diesel-free is a significant benefit,” he says.