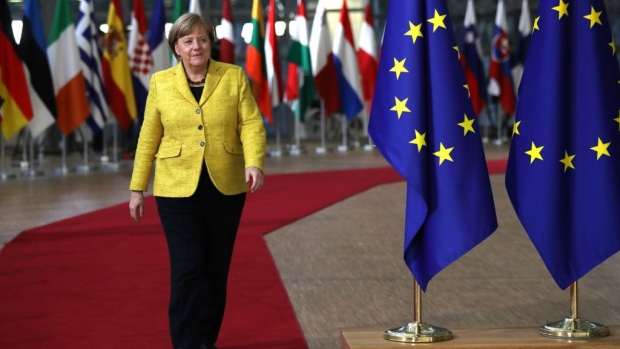 (Bloomberg Opinion) -- Covid-19 is a crucible of leadership. Some people are failing this test — the presidents of Brazil, Russia and the U.S. spring to mind. Others are passing it with flying colors, notably the leaders of New Zealand, Denmark and Taiwan. All three happen to be women and have largely controlled the spread of SARS-CoV-2 in their countries while preserving social cohesion.

And then there’s German Chancellor Angela Merkel, who’s also been having a relatively good pandemic. As she entered 2020, her 15th year in office, she looked exhausted. Having ruled out a fifth term and resigned as boss of her party, she was in effect a lame duck. But Covid changed all that. It rejuvenated Merkel as a leader.

As a trained quantum chemist, she’s been managing the outbreak like the scientist she is, with pragmatic policies based on the expertise of epidemiologists. In polls, she became Germany’s most popular politician again, with an approval rating of 71%.

But as she nears the end of her time in office, her legacy still seems questionable. Aside from Covid, her domestic record is mediocre, with no economic reform worth speaking of. In European politics, she was often divisive. During the refugee crisis of 2015, she shocked her European partners by unilaterally opening Germany’s borders to migrants for several chaotic months. Before that, during the euro crisis, she alienated Greeks and other southerners by forcing them into fiscal “austerity.”

The consensus in Berlin and other capitals was that Merkel, who spent half her life living in communist East Germany, had a cerebral connection to the idea of European integration and identity, not an emotional one. She was seen to do just enough during crises to prevent dissolution, but never enough — even when French President Emmanuel Macron begged her — to move the European Union forward.

And then, surprisingly, Covid changed that. Early in the outbreak, as member states closed their borders, hoarded medical equipment and suspended the single market, Merkel glimpsed a scenario in which the EU might become irrelevant or even unravel. And she felt genuine fear.

So Merkel and Macron restarted the traditional Franco-German “engine” that powers the EU. They  proposed a 500 billion-euro ($562 billion) fund to give grants to member states, such as Italy and Spain, that suffered most in the pandemic. Another German leader, Ursula von der Leyen, the president of the European Commission, then slapped an additional 250 billion euros on top in loans.

The biggest surprise was Merkel’s consent to financing this fund with bonds issued by the Commission. This seemed to be a baby step toward mutualized debt and the European “transfer union” that she’d always resisted. It could imply a more federal EU, with European tax revenues in the future. That would require treaty change and fall to Merkel’s successors. But for this German chancellor, her conversion was almost Damascene.

It could also secure her the legacy she still lacks, provided she makes the plan reality. And it really is now up to her. On Wednesday, Germany takes over the rotating presidency of the Council of the EU, the institution that represents the 27 member states and co-legislates with the European Parliament. For the rest of this year, the EU’s largest country formally has the role Germans have long been resisting: of being Europe’s leader.

The European coronavirus fund will consume much of her effort. Getting all 27 countries to accept it — Merkel wants a deal in time for the European summit on July 17 — will be fiendishly difficult. She also has to get agreement on the EU’s next seven-year budget. And she wants to stabilize relations with China, which have been getting worse, to do more with Africa, to jump-start Europe’s “Green Deal” and digital transformation — and generally to make Europe more credible in a dangerous world.

That’s a lot for any leader. So how does Merkel plan to go about it? Before she became Commission president, Von der Leyen once described to me the quintessential German style of statecraft as “leading from the center.” I used to sneer at that phrase as German waffling to get out of real leadership — the kind you do from the front, with others following.

But in this unusual year in world history, I’m having second thoughts. What’s kept Merkel in power all these years is her empathy. She has a knack for sensing what motivates others and keeping them at the proverbial table. She does this with every tool at her disposal, from sober logic to subtle body language.

In certain contexts, leading from the center may be the highest form of the political art — as also practised by Jacinda Ardern in New Zealand, Mette Frederiksen in Denmark and Tsai Ing-Wen in Taiwan. If Merkel in these coming months holds Europe together, that will be her legacy. It would be a big one.

Andreas Kluth is a columnist for Bloomberg Opinion. He was previously editor in chief of Handelsblatt Global and a writer for the Economist. He's the author of "Hannibal and Me."