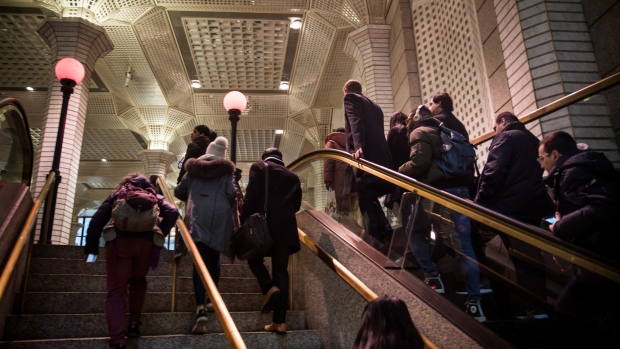 Commuters exit a Wall Street subway station near the New York Stock Exchange (NYSE) in New York, U.S., on Monday, March 11, 2019. U.S. stocks bounced back from the worst week of the year, as chipmakers rallied on deal news and the latest retail-sales data boosted confidence that the economy isn't headed for a downturn. , Bloomberg

(Bloomberg) -- The word went out even before the opening bell: the Fed had to step in.

Up and down Wall Street, phones lit up Tuesday morning as a crucial market for billions in overnight borrowing suddenly started to dry up. What had begun on Friday, with tremors inside U.S. short-term funding markets, was escalating rapidly.

At a small broker-dealer in New Jersey, Scott Skrym could sense the money draining away.

“This is crazy!” Skrym exclaimed. A key interest rate -- one the entire marketplace was now fixated on -- was shooting to as high as 10%. That was four times its level a week ago.

Not since the 2008 financial crisis has a spike in money-market rates caused such a stir -- or prompted such a response.

From New York to Chicago to Los Angeles, major banks, corporations and investment firms struggled to get answers about what is usually a simple question: Where is the overnight repurchase rate, the grease that keeps the vast global financial system spinning? Rumors flew. Wall Street dealers scurried to protect their clients -- and themselves.

Inside the Federal Reserve Bank of New York, the powerful markets group had already been canvassing dealers about lending rates. By 10:10 a.m., after an initial, embarrassing misstep, the Fed was pumping $53.2 billion into the market to calm nerves and regain control over interest rates -- its first intervention since the dark days of Bear Stearns, Lehman Brothers and the rest.

The whirlwind day left traders with a host of questions, including the big one: Now what? Shortly after 4 p.m., the Fed announced it would intervene with another repurchase operation on Wednesday.

Overnight financing is a basic function, but it’s so sensitive that many Wall Street dealers and corporate treasurers decline to talk openly about it. Privately, market participants likened the events of the past few days to to a plumbing problem -- the result of forces that, for most people, are largely hidden from view.

Unlike in 2008, Tuesday’s abrupt rise in short-term rates wasn’t evidence that the financial system was in trouble. Rather, it was the result of a confluence of forces, including corporate tax payments and big Treasury auctions and, ultimately, the swelling U.S. budget deficit.

Mark Cabana, head of U.S. interest rate strategy at Bank of America, saw it coming. He warned in a Sept. 13 note that the so-called dollar funding markets were about to be tested.

Corporations had to withdraw cash from money market funds and bank accounts to make quarterly tax payments, while Treasury buyers had to settle up with Uncle Sam for recent purchases. On Friday alone, about $20.4 billion flowed out of money-market funds, according to Peter Crane, president of Crane Data LLC.

Such technicalities aside, the developments nonetheless showed the Fed was losing control over short-term lending, one of its tools for implementing the monetary policy that helps guide the entire economy.

The market was so topsy-turvy that the effective fed funds rate rose, even as economists predict the central bank will reduce the benchmark at its policy-making meeting on Wednesday.

The tumult also points to another worrisome sign: Wall Street is struggling to absorb record sales of Treasury bonds and bills that the Trump administration is using to fund a growing budget deficit. What’s more, many dealers have curtailed trading because of reforms implemented after 2008, making markets more prone to volatility.

Tuesday’s intervention marked the culmination of days of growing strains. Everyone knew pressure was building, said the head of rates financing at one major bank. But few expected a spike like this.

By early Tuesday morning, dealers were whispering that the overnight repo rate would open at about 6%, well above the 3.5% where it had closed the night before.

As usual, Robert Sabatino, global head of liquidity at UBS Asset Management, was making daily calls to check that counterparties were executing transactions at the prevailing market rate. Some of them were quoting 3%. Sabatino knew the clearing rate was much higher -- between 5% and 6%.

“It’s normal price discovery, but now complicated when the market is in flux,” he said.

It was even worse than the dealers had feared.

The repo rate kept rising, eventually reaching as high as 10%. By 9 a.m., a half hour before the stock market was to open, the fed funds rate was bumping up against the Fed’s upper limit.

The message was clear: the Fed would have to step in like it used in the days before the financial crisis. At 9:17, the Fed confirmed what everyone already suspected: it would conduct an overnight repurchase agreement operation from 9:30 to 9:45. The move would inject as much as $75 billion of liquidity into the market.

Then, messages began flying across Wall Street. Rumors swirled that the Fed operation had been abruptly canceled. Only this wasn’t a rumor: the Fed was having technical problems.

With anxiety growing, the Fed bumped the time to 10 a.m. Within 15 minutes, it injected $53.2 billion, bringing rates back down, at least for a time.

“You couldn’t have picked a worse day for this to happen,” said Thomas Simons, senior economist at Jefferies LLC.

The next Fed operation is scheduled to commence at 8:15 a.m. on Wednesday.

“People are worried about tomorrow,” said Sabatino at UBS. The Fed has to move early -- and get this right. “It’s important for the market because there’s no other facility.”

To contact the editors responsible for this story: Jenny Paris at jparis20@bloomberg.net, David Gillen, Kara Wetzel